Warning: mysqli_free_result() expects parameter 1 to be mysqli_result, bool given in /var/www/html/americanthinker/admin/common/functions/func.general.php on line 126
 Blame the Tea Party? Use Your Memory - American Thinker
|

Blame the Tea Party? Use Your Memory

The virus that causes people to go mad and vote Democrat has apparently spread to erstwhile conservatives.  Take Ann Coulter, please.  She writes:

For reasons of purity, we dumped an unbeatable Republican candidate and ran a conservative activist with no electoral victories to her in name for the U.S Senate from Delaware -- a state that hasn't voted for a Republican president in nearly two decades. For no good reason, we threw out another sure-winner incumbent Republican senator from Indiana. Driven by a "Privatize the Lighthouses" purity, we ended up with a narcissistic loon running for the U.S. Senate from Missouri.

Ann's not the only one, of course. Plenty of people who I used to think were on our side are blaming the "Tea Party," whatever that is.  The usual suspects are Christine O'Donnell (the Delaware case that Coulter refers to), Sharron Angle (Nevada), Richard Mourdock (Indiana), and Todd Akin (Missouri).  (Akin's problem had nothing to do with privatizing lighthouses, but everything to do with his theory of the reproductive process.)

Maybe you've heard the phrase, "use your words."  I tell people to "use your memory."  Let me refresh your memory with this chart.  (It took 50 Republicans to ensure majority control of the Senate while Bush was president.  After that, it would take 51.) 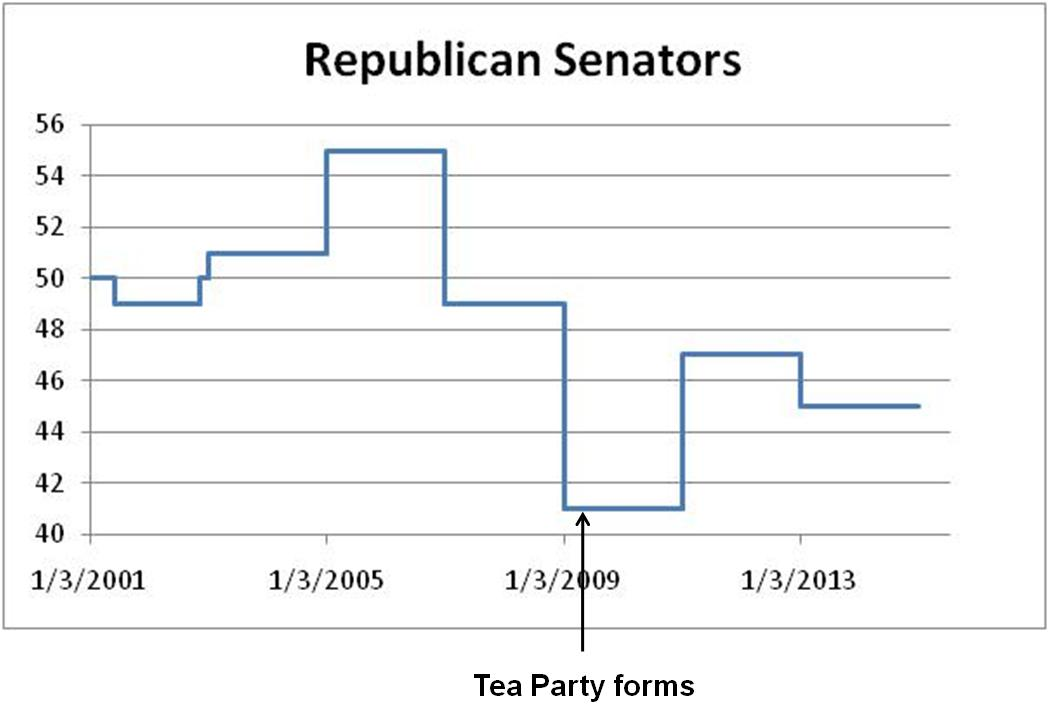 Source for numbers: US Senate.

On January 2, 2007, the U.S. Senate had 55 Republican senators.  Just over two years later, it had only 41.  Republicans lost majority control of the Senate in 2006, and then lost so many more senators in 2008 that the Democrats could finagle their way to filibuster-proof control.  For our sins we were saddled with the $830-billion Stimulus in 2009 and ObamaCare in 2010, causing a permanent increase in federal spending and regulation from then to infinity.  Those sins, by the way, were then baked into the cake.  All Democrats needed to do after that was insist on continuing resolutions.

Look at those years again.  The loss of the both houses of Congress, Obama's election, the Obama Stimulus, and ObamaCare all happened before the 2010 elections, meaning before the first nationwide election in which the Tea Party existed.

And what happened immediately after the Tea Party came into existence?

(2)   A gain of 64 seats in the House of Representatives, enough to win back majority control after four years of Democrat control.

Republicans won just about everything that could be won in 2010, except the Senate.  One reason for that?  Only one third of the Senate is up for election in any election year.

But for Princess Ann, the pea under all those winning mattresses was Christine O'Donnell.  Use your math, Ann.  Let's hypothesize that both Tea Party ogres, O'Donnell and Angel, had won in 2010.  That would have given Republicans 49 Senate seats, still two short of majority control.  Those were not critical losses, even if you assume (and one can only assume) that the non-Tea Party Republicans would have won those seats.

And while we're assuming, let's assume that Richard Mourdock's and Todd Akin's primary opponents had won in 2012.  Then, instead of 45 Republican senators, we'd have 47, still well short of majority control.  Scott Brown lost in that same election, despite being the incumbent.  Too Tea Party pure?

People whining about the Tea Party are the real "purists."  They expect miracles from the Tea Party while accepting all the excuses in the world from non-Tea Partiers.  Let's review how this all started, shall we?

It was in the elections of 2006 that Republicans lost control of both the House of Representatives and the Senate.  And it was in 2008 that Democrats won the presidency and gained even larger majorities in both houses of Congress.

Now, what had happened prior to that?  The Tea Party didn't even exist, remember?  What happened was that Republicans had everything at the national level -- House, Senate, and president -- for the first time since 1954.  And they were not very Tea Party.

That is why we are in the mess we're in. The Tea Party is not demanding purity; it is demanding sanity.

We Tea Party types kept our mouths shut for 20 years and voted Republican as the Party nominated George H.W. Bush, Bob Dole, George W. Bush, and John McCain.  We bit our tongues as our president waxed wise about "compassionate conservatism" and Karl Rove talked of a new Republican era.  But they won two elections in 2000 and 2004, so we gave them the benefit of the doubt that they at least knew how to "win."  We were hoping to get two steps forward for every step backward.

But what were our forward steps?  What did we "win"?  Republicans spent more.  They regulated more.  They expanded programs we Tea Partiers had hoped to eliminate.  And they invented a whole new $8-trillion entitlement that none of us asked for.  We weren't looking for purity at all, but simply one iota of a difference from Democrats.

"But you can't expect to elect a Jim DeMint in Vermont."  No, but we did elect Jim Jeffords.  How did that work for us?  Arlen Specter?  Charlie Crist?  How many times do you expect us to kick Lucy's football?

So stop looking at the mote in the Tea Party's eye, and start looking at the beam in your own.  (That's a reference to Jesus's Sermon on the Mount, for those of you who might have forgotten it, or never learned it.)