The Congressional probe to determine who was responsible for the Internal Revenue Service (IRS) policy of discriminatory audits and/or retaliatory examinations of conservative organizations applying for tax-exempt status just became a criminal obstruction of justice matter. A series of emails released on October 8th by Congressional investigators documents that the former IRS manager of tax exempt determinations, Lois Lerner, and the top IRS official for ObamaCare, Sarah Hall Ingram, disclosed confidential taxpayer information to Deputy Assistant to the President for Health Policy Jeanne Lambrew and White House health policy advisor Ellen Montz regarding churches who filed suit against ObamaCare's contraception mandate. This action appears to be criminal, but if the motivation was intimidation, the penalties would skyrocket for obstruction of justice.

On May 16, 2013 I published "Did Executive Branch Violate IRS Code 6103" detailing the disclosure of J. Russell George, the Treasury Inspector General for Tax Administration, June 4, 2012 disclosure to the General Counsel of the United States Treasury and Deputy Treasury Secretary Neal Wolin about the details of his investigation into potentially discriminatory and/or retaliatory audits by the IRS against Tea Party and other conservative organization. Disclosure of taxpayer information held by the IRS was considered public record until 1977 and the rules regarding disclosure were under the authority of the Executive Branch. But after the President Nixon IRS scandal, Congress passed Section 6103 of the Internal Revenue Tax Code, which eliminated any presidential discretion regarding IRS sharing tax information between different Executive Branch departments and any public disclosure of tax records. 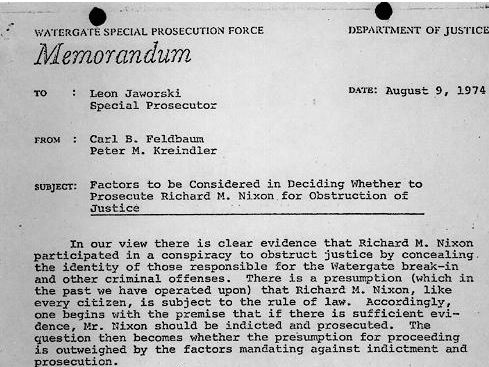 Section 6103 of the Internal Revenue Code forbids any federal employee to "disclose any return or return information obtained by him in any manner in connection with his service as such an officer or an employee." Under "Title 26 USC § 7213 -- Unauthorized disclosure of information," disclosure of IRS information from tax filers is a felony punishable upon conviction by a fine in any amount not exceeding $5,000, or imprisonment of not more than 5 years, or both, together with the costs of prosecution. If such offense is committed by any officer or employee of the United States, he shall be dismissed from office or discharged from employment upon conviction for such offense.

One day earlier, Interim IRS Commissioner Steven T. Miller, who holds a Juris Doctorate law degree from George Washington University, a Master of Laws in taxation from Georgetown University, worked for a number of years as an attorney in the IRS Chief Counsel's office and served as a Congressional staff member for the Joint Committee on Taxation, resigned after months of denying he had any knowledge of discriminatory and/or retaliatory actions by the IRS against conservative organizations. On May 12, 2013 I published "IRS HAD ENEMIES LIST IN 2010 & 2012," containing a copy of a July 11, 2011 hand-signed memo on U.S. Treasury Department stationary. The memo warns the IRS Division Commissioners from Small Business, Self-Employed, Tax-Exempt and Government that: "Questions have been raised regarding the application of gift tax to contributions to I.R.C. § 501 (c)(4) organizations. This is a difficult area with significant legal, administrative, and policy implications with respect to which we have little enforcement history. My office will be coordinating with the Office of Chief Counsel to determine whether there is a need for further guidance in this area." The memo contradicted numerous IRS officials who testified to questionable activities regarding conservative organizations started in early in 2012 in the IRS Cincinnati regional office.

The emails for July 2012 that were released on October 8th by the House Oversight and Government Reform Committee have numerous sections blacked-out as redacted with the stamp "6103". The Internal Revenue Manual -- 37.1.2 Disclosure of Information under Part 37. Disclosure 37.1.2.2.1 states that Individual Members of Congress have no special statutory rights to obtain returns or return information.

The 2012 emails appear to indicate that Ms. Ingram and her boss Ms. Lerner were conspiring with the White House on strategies to use confidential taxpayer information to generate IRS compliance violations that could be used as evidence to intimidate the religious organizations opposing ObamaCare's contraception mandate to drop their suit or face the imposition of retaliatory rulings to hurt their courtroom credibility.

If the IRS and the White House were seeking to threaten or intimidate an opposing party in a federal judicial proceeding, such action would be obstruction of justice. Title 18 U.S.C. § 1512 -- "Witness Tampering" prohibits intimidation, threat, misleading or corrupt persuasion with the intent to prevent physical evidence from being truthfully presented at official federal proceedings is subject up to 20 years imprisonment. Similarly, Title 18 U.S.C. § 1503 -- "Obstructing Federal Courts" bans corruptly obstructing or impeding the "due administration of justice" and imposes up to 10 years imprisonment. Title 18 U.S.C. 18 USC § 1346 bans any scheme or artifice to defraud and is subject up to 20 years of imprisonment.

On Saturday, July 27, 1974 the House Judiciary Committee approved its First Article of Impeachment charging President Nixon with obstruction of justice as "HIGH CRIMES AND MISDEMEANOURS." Thirteen days later, in a letter that began: "In our view there is clear evidence that Richard M. Nixon obstructed justice," Special Prosecutor Leon Jaworski accepted the president's resignation as punishment for his crimes.

The fact that the United States Justice Department has a huge conflict of interest if the White House and/or IRS was engaged in obstruction of justice, renders it almost impossible for the President of the United States to prevent the appointment of a Special Prosecutor to review the above potential crimes.

With the stringent penalties associated with obstruction of justice, it will be wildly attractive for potential witnesses to begin seeking immunity from prosecution in exchange for full testimony. America may soon be involved in another Constitutional crisis.