Warning: mysqli_free_result() expects parameter 1 to be mysqli_result, bool given in /var/www/html/americanthinker/admin/common/functions/func.general.php on line 126
 Americans Must Suffer - American Thinker
|

Watching Barack Obama and his shutdown shenanigan theatre, I discovered I have something in common with our inchoate president -- we both want Americans to suffer.

As a sociopathic solipsist, Obama is incapable of feeling anyone's pain, and because of this, his goal has been to make this shutdown as agonizing as possible.

Ted Cruz, an honorable man with conviction, thought he could force ObamaCare concessions from the administration using the continuing resolution as a cudgel. Boehner thought the debt ceiling offered better opportunities. They decided on the infamous "defund strategy."

Their strategy had a fatal flaw. For the Cruz maneuver to have succeeded, Barack Obama and the Democrats had to fear the shutdown. This was obviously not the case. They, in fact, welcomed it, and have done everything in their power to make it as painful as possible.

Barry, with the press in his pocket, knew he could hang the whole mess around the necks of Republicans. Because of this, conservatives never had a chance of forcing concessions from the administration.

It's the same with the debt ceiling. The "default" threat from the president should serve as a warning. The United States has somewhere around $250 billion coming in each month, while it spends somewhere north of $300 billion.

Since the 14th Amendment guarantees the debt, and there are enough funds coming in to service the debt, there would be no default -- spending would simply have to be prioritized, by cutting monies from all that discretionary spending that is so important to Barry and his minions. In effect, not raising the debt ceiling would serve as a spending cut.

Default would have to be a deliberate choice.

Now normally, with any other president, Republicans would have tremendous leverage, but, as they used to say in my Bronx, Italian neighborhood, "Forget about it." 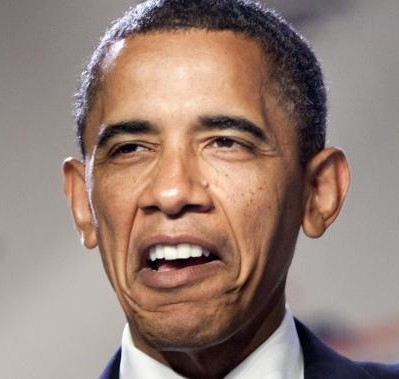 Barry wants default. He would deliberately choose not to pay the interest due on the debt, triggering default. He is confident he can blame it on Republicans, and if the world's economy ends up trashed, so be it. It's all about Barry.

He believes default wins back the house in 2014 and allows him to finish his transformation of the nation. He has nothing to lose. You see, he doesn't care what happens to the country or its people -- or the world for that matter.

You can't negotiate with terrorists.

No... this battle is lost and the Republicans will be lucky to keep the sequester cuts in place, when all is said and done.

They were never going to win anyway, and leaving ObamaCare intact is a retreat, but an ultimate victory for Republicans and America. At least they made a clear and unequivocal stand against the ACA and now there is not a person in the country who is not aware that Barack Obama owns ObamaCare.

Conservatives have an ace in the hole, and that is Barack Obama.

Barry is the most dangerous of morons, the moron who doesn't think he is a moron. He believes in his heart of hearts that he is doing a great job -- and nothing will convince him otherwise.

His narcissism will never allow him to give up on ObamaCare. After all, it is his progeny, his legacy. Isn't it named after him? No matter how bad it gets he is not letting go. Republicans should give him what he wants, full implementation. To paraphrase Napoleon, when your enemy seeks defeat, don't get in his way.

Delaying the individual mandate for a year was the wrong victory to seek. ObamaCare must proceed unencumbered. Americans must suffer, or they will continue to elect incompetent community organizers, preaching "hope and change."

This is the tide that turns. ObamaCare must be allowed to collapse on its own lack of merits. It is a Ponzi scheme, government style. It relies on ever-increasing numbers of the young and healthy willing to pay more, in order for the sick and elderly to pay less.

Picture "Julia," an uninsured 30-year-old making $40K a year as a graphic designer, healthy, and with the arrogance of youth, confident she will always stay that way. The penalty -- starting in 2014 -- for remaining uninsured will be $95 or 1% of her income. Perhaps, this computer-savvy "Julia" finds acceptable coverage for $200 per month (I know, dream on).

Her options are clear, spend $2,400 or $4,000 for something that she didn't want or require. She is going to enroll and pay the $2,400. Does anyone think "Julia" will be happy about this? To her, it is a tax, $2,400 less she has to spend on her wants and needs. Will she vote in 2014 to reelect the Democrat senator or representative who forced this upon her?

On the other hand... take another "Julia," a friend of mine. She is a 54-year-old, soon-to-be divorced woman working part-time for both Goodwill Industries and the New York State DMV. Last year she made $26,512 -- she counts every penny and will not take anything from anyone. She cries that ObamaCare prevents her from getting a full time position that might offer medical benefits. The Kaiser Calculator, after the Obamacare subsidy, calculates her minimum insurance plan will cost a little less than $2K.

She is going to pay the $265 fine. After all, if she gets sick, preexisting conditions are covered under Obamacare. She just has to survive long enough to get to the next enrolment period and in any case, she can't afford the $2K. In addition, there is always the emergency room. She is exactly 26,512 pennies poorer. Thanks Barack!

As another example..."Julia" is an uninsured 22-year-old poor girl making minimum wage at the local bodega, ravenously snapping up food stamps and section 8 housing, but not smart enough to get Medicaid coverage. She didn't need it, there was always 911 and the emergency room.

She will be forced into Medicaid, and as a newly insured, you can bet she will use her coverage, and use it, and use it. That won't hurt premiums, will it?

People need to feel it in their wallets, and the individual mandate is a great tool for creating bitterness and anger within and without the low-information Obama voting bloc. It has been said, that once Americans get on the ObamaCare-subsidy-teat, they will be hooked, but, those subsidies go not to the insured. They go directly to the insurance companies. All the insured will ever see is the bill for insurance.

As stated before, and again for emphasis, ObamaCare is a Ponzi scheme. It can only survive if more and more of the healthy and young agree to pay more and more so that the unhealthy and older pay less. Human nature tells us that's not going to happen, and because of that, even the rare example of someone benefiting today from enrolment, will see their benefit evaporate when next year's premiums skyrocket.

America is a nation of more than 300 million people. ObamaCare takes over one fifth of the country's economy. Who wins with this?

The people who benefit, benefit marginally, because they already had available healthcare through Medicaid and the ubiquitous ER, while the people who will pay for it, will actually have their coverage restricted and debased, while open to unprecedented scrutiny and interference, as well as being made more expensive.

Who wouldn't want that?

In reality, there is no upside to ObamaCare and Americans must suffer in order to realize this. Once they do, Obama will be finished, and the nation and the world will be better for it.

To return to Napoleon, ObamaCare is Barack Obama's Waterloo. Let's do what we can to help him get there.