Warning: mysqli_free_result() expects parameter 1 to be mysqli_result, bool given in /var/www/html/americanthinker/admin/common/functions/func.general.php on line 126
 What the Secular Media Doesn't Know about Pope Francis - American Thinker
|

What the Secular Media Doesn't Know about Pope Francis

In recent columns in the mainstream press, columnists have been distorting gleefully the Pope's recent statements to make it appear he's the liberal that will bring the Catholic Church in line with their own agenda.  (See: What the Pope really said.)

In actuality, Pope Francis is no more likely to approve gay marriage or homosexual activity than any other pope. If the media were less agenda-driven, they would be trying to debunk a miracle that defies explanation and which involves Pope Francis when he was a bishop in Argentina in 1996. 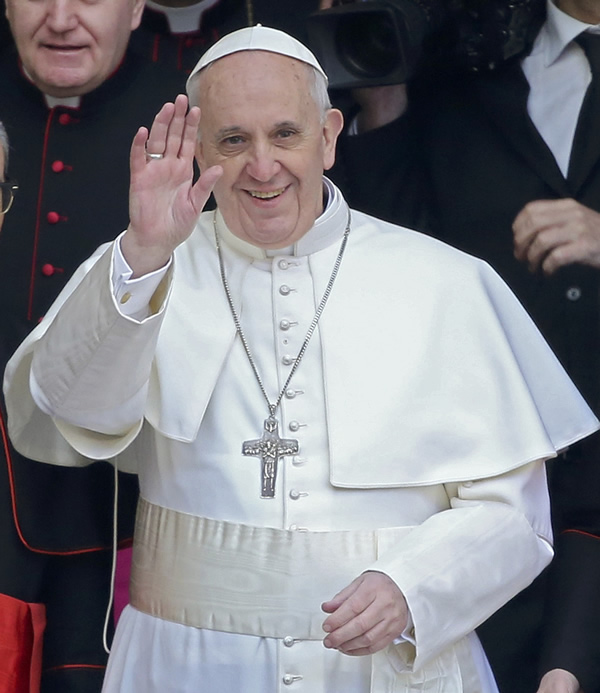 For many Christians, Holy Communion is a symbolic ritual, but Catholics believe it is in fact His divine body and blood.  This sounds absolutely nuts, but it's a matter of faith. However, I had never heard about the Eucharistic miracle until a friend sent me a YouTube video explaining what it was all about.

On August 18, 1996 in Buenos Aires, Argentina, at Holy mass, a woman discovered a discarded host on a candleholder and brought it to Fr. Alejandro Pezet who placed it in a container of water inside the tabernacle of the chapel of the Blessed Sacrament. The following Monday, August 26, upon opening the tabernacle, the priest was astonished to find that the Host had become a bloody substance and he notified his Bishop Jorge Bergoglio (now Pope Francis I), who gave instructions that the bloodied flesh be photographed. When the photographs were taken on September 6, the bloodied flesh had grown significantly in size. After it had been kept in the tabernacle for a few years the Bishop decided to have it scientifically analyzed since it had not suffered any visible decomposition.

This is where the weird part comes in, and I am still puzzled why this miracle, which has been well-documented and verified by church officials, is less publicized than the Shroud of Turin which still remains officially uncertified.

In 1999, in the presence of then Cardinal Bergoglio, Dr. Ricardo Castanon, an atheist at the time, sent the fragment to New York for analysis, but did not inform the team of scientists its origin so as not to prejudice the study.  One scientist, Dr. Frederic Zugibe, a cardiologist and forensic pathologist, determined that the substance was real flesh and contained human DNA, and furthermore he concluded was a piece of heart muscle.

There were two witnesses to these tests, Australians, journalist Mike Willesee and a lawyer Ron Tesoiero.  I Googled both names and found their detailed testimony on You Tube videos of what they describe as a Eucharistic miracle.  Both men knew where the sample came from and were dumbfounded when Dr. Zugibe said that the sample came from a heart that was alive at the time the sample was taken.  He further concluded that white blood cells had penetrated the tissue, indicating that the heart had been under severe stress.   They then told the doctor that the sample had been kept in distilled water for three years before being sent out for analysis.  Dr. Zugibe said that there was no way to explain this scientifically, and when they explained that the sample came from a consecrated Host made of white unleavened bread, he said it was a mystery beyond his competence.

Yet this was only the beginning of what would be a phenomenal enigma.  DNA tests on the sample showed it to be that of a male, AB positive blood type. What is extraordinary about this fact is that the DNA is the exact same match as another Eucharist 'miracle' that took place in the 8th century in Lanciano, Italy confirming that both samples came from the same person.

The Lanciano sample is over 1200 years old and the elements can still be seen today. The flesh, which is the same size as the large host used in the Latin Church, is fibrous and light brown in color and becomes rose-colored when lighted from the back. The blood consists of five coagulated globules and has an earthly color resembling the yellow of ochre.

Odoardo Linoli, a professor in anatomy and pathological histology who has examined the Lanciano sample has verified that it is real flesh and the blood is real blood. The flesh and blood belong to the human species. It is from the muscular tissue of the heart. He has confirmed that in the sample we see : the myocardium, the endocardium, the vagus nerve and also the left ventricle of the heart for the large thickness of the myocardium. The flesh is a heart complete in its essential structure. Both the flesh and the blood showed no evidence of preservatives (or other added chemical agents of any kind) being used.

So what does this all mean? Atheists have made many efforts to debunk the Lanciano 'miracle' but as far as I have determined, the most they have been able to do is spread doubt about the sample originating as a communion wafer. I haven't encountered much of any campaign to debunk the Buenos Aires sample as yet and that may be why the Church hasn't publicized it heavily.

In all the interviews since his ascension to the Papal chair, no one has asked Pope Francis what he makes of this alleged miracle. Perhaps, they've never heard of it. I certainly knew nothing about it and I'm a practicing Catholic. I certainly would find investigation of this 1996 discovery more interesting than whether the Pope is a radical liberal.