Warning: mysqli_free_result() expects parameter 1 to be mysqli_result, bool given in /var/www/html/americanthinker/admin/common/functions/func.general.php on line 126
 The UN Climate Panel's 'Hot Spot' is Missing in Action - American Thinker
|

The UN Climate Panel's 'Hot Spot' is Missing in Action

The Second Assessment Report of the Inter-governmental Panel on Climate Change, the UN's climate-science panel (IPCC-AR2, 1996), invented the Hot-Spot in the tropical atmosphere about 10 km above the earth's surface and assumed, mistakenly, it was proof of Anthropogenic Global Warming (AGW).  But the hotspot has never been demonstrated observationally.  The Fifth IPCC Report (AR5, to be released on Sept 27, 2013) conveniently ignores this inconvenient fact.

The consequences of the IPCC mistake were very serious -- and are still with us.  First, they concluded that the "balance of evidence" argued for AGW.  This conclusion, in turn, provided the scientific basis for the 1997 Kyoto Protocol, which was designed to reduce emissions of carbon dioxide -- but never did, while wasting hundreds of billions and raising prices for energy substantially.  Kyoto applied only to industrialized (OECD) nations.  After many inducements, Russia finally ratified Kyoto; the United States, under Clinton-Gore (yes!), never even submitted the Protocol to the US Senate for ratification. 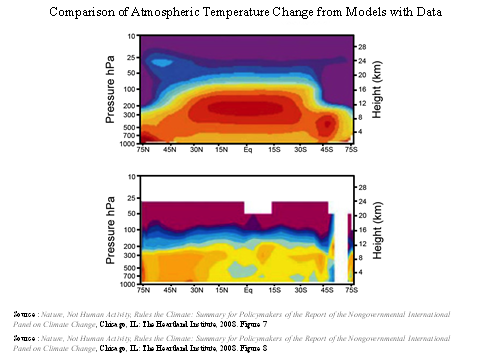 The hotspot issue started a long-running debate, which was only settled in the past few months, and has now led to a surprising conclusion (see below).  Everyone agrees that current climate models predict the existence of a hotspot, a maximum of the warming trend in the tropical upper-troposphere, at around 10km (see top graph).  But neither radiosondes (carried in weather balloons globally since 1958) nor weather satellites (since 1978) show evidence for the existence of such a hotspot (see bottom graph).

[According to theory, there should be an atmospheric amplification of any surface warming trend because of the existence of what text books call a "moist-adiabatic lapse rate."  This comes about because cumulus clouds, driven by surface warming, mainly in the tropical zone, can carry water vapor into the upper atmosphere; its condensation into water droplets there releases latent heat and thereby warms the atmosphere.]

In 2004, and in more detail in 2007, several academic scientists described the disparity between model predictions and observations-thereby contradicting the IPCC-AR2 conclusions.  [Full disclosure: I was co-author of the 2004 and 2007 papers published in Geophysical Research Letters (GRL) and International Journal of Climatology (IJC), respectively.]

The same result was also obtained by the US government-sponsored Climate Change Science Program (CCSP).  In 2006, it published the graphs shown above, officially confirming the disparity between model predictions and observations.  However, the Executive Summary of the same CCSP report managed to obscure this important result, which came from Chapter 5 of the report (BD Santer, lead author).

Rather inconsistently, a rather complicated and lengthy paper by Santer and 17 coauthors (in IJC 2008) attacked these conclusions and claimed that models and observations were consistent.  We responded, pointing out several errors, and published our results in Energy & Environment in 2011, and again in 2013.

We can now state confidently that after nearly 20 years of debate about the hotspot the matter is settled and accepted by all.  There is no consistency; there is indeed a disparity between models that predict the hotspot and the actual observations that do not show one.

In the meantime, however, the Kyoto Protocol expired in December 2012 -- but not before first having wasted hundreds of billions of dollars (and counting).  Government policies of OECD nations, including the United States, are in force as if the Protocol were still in existence; these policies are imposing further costly restrictions on the emissions of carbon dioxide.  For example, President Obama has declared that Climate Change will have a high priority in his second term of office and has instituted what has been called a "War on Coal," using regulations by the Executive Branch of government to circumvent the intent of Congress.

As a result, the cost of energy is still rising in OECD nations -- but without slowing down the accelerating rise of atmospheric CO2  levels.  China, and soon India, are by now the leading emitters of CO2, making OECD decisions increasingly irrelevant.

Returning to climate science: How to interpret the lack of consistency between models and observations of the hotspot?  There are three basic choices:

1.  The atmospheric measurements could be in error -- favored by climate alarmists.  This is very unlikely since radiosondes and independent satellite observations agree that the tropical atmospheric warming trends from 1978 to 2000 are essentially zero.

2.  The models could be in error -- favored by most skeptics.  This is also unlikely.  While climate models are certainly far from perfect, they do follow faithfully the instructions given to them.  Also, independent research indicates there is amplification shown (as expected) by atmospheric trends of short-term surface trends -- with the former up to double of the latter.

3.  This leaves the possibility that the reported surface trends (covering the period 1978-2000) have been greatly over-estimated, and are in actuality close to zero.  After all, if the atmospheric trend is ~zero and represents an amplification factor of ~2, then half of zero is still zero.

It turns out then that this third possibility is the most likely.  Such near-zero surface trends are supported by independent ocean data and by 'proxy' data of tree rings, ice cores, stalagmites, etc.

In 2000, the National Academy of Sciences appointed a distinguished panel of atmospheric scientists under the chairmanship of Prof. Mike Wallace (Univ. of Washington) to try to discover why the reported surface warming from 1978 to 2000 was not amplified in the atmosphere.  The panel published a learned report but could not reconcile the disparity between surface and atmosphere.  This disparity disappears, however, if the surface trend is near-zero.

This conclusion implies that the surface observations, primarily from land-based weather stations greatly exaggerate a global warming trend -- perhaps because they measure local warming rather than global warming.

If that is the case, then the climate sensitivity for CO2 is very low indeed -- and any future warming based on an increase of carbon dioxide will not be significant.  Such a prediction seems to be borne out also by the global temperature data of the 21st century that show no surface warming to speak of during at least the past decade.

The forthcoming (Sept. 2013) IPCC report claims that the reported surface warming of 1978-2000 is sure (better than 95% -- by IPCC's own unsupported estimate) evidence for AGW.  But the missing hotspot is sure (better than 96%, by my personal reckoning) evidence against the existence of any such warming.  But before you dispose of the 2000-page-plus IPCC report, stop and consider: it makes a wonderful paper weight or door stop.

S. Fred Singer is professor emeritus at the University of Virginia and director of the Science & Environmental Policy Project.  His specialty is atmospheric and space physics.  An expert in remote sensing and satellites, he served as the founding director of the US Weather Satellite Service and, more recently, as vice chair of the US National Advisory Committee on Oceans & Atmosphere.  He is a Senior Fellow of the Heartland Institute and the Independent Institute.  He co-authored the NY Times best-seller "Unstoppable Global Warming: Every 1500 years."  His ideas on SLR are discussed in "Hot Talk, Cold Science: Global Warming's Unfinished Debate," published by The Independent Institute, Oakland, CA, 1997.  In 2007, he founded and has since chaired the NIPCC (Nongovernmental International Panel on Climate Change), which has released several scientific reports [See www.NIPCCreport.org].  For recent writings see http://www.americanthinker.com/s_fred_singer/ and also Google Scholar.