Warning: mysqli_free_result() expects parameter 1 to be mysqli_result, bool given in /var/www/html/americanthinker/admin/common/functions/func.general.php on line 126
 The Mythical Public-Sector Collapse - American Thinker
|

At The Atlantic, there is a story discussing private- and public-sector job-creation under Obama relative to the other presidents since Reagan.  The Atlantic's coverage of this topic illustrates once again the need to normalize data when making comparisons.

Over at this other publication, the equivalent of the figure on the left shown below is provided -- which illustrates absolute cumulative private sector job creation since taking office for Reagan, Bush 41, Clinton, Bush 43, and Obama.

But this fails to account for population growth.  When we normalize the data to population, we get the plot above on the right.  Obama is still well into the job-creation hole, and not even close to where the Reagan recovery was at this point in time.  When Reagan took office, there were 326,000 private-sector jobs per million population.  At this point in his term, that had already increased to 340,000, heading up to 363,000 by the time he left office.

By comparison, when Obama took office, there were also -- coincidentally -- 363,000 private-sector jobs per million population.  They are currently down at 361,000.

Another key point is that simply looking at absolute job numbers suggests that Clinton substantially outperformed Reagan (by 42%).  When normalized to population, however, Clinton's private-sector job creation record is only 15% better than Reagan's and was clearly flat-lined for the year before he left office -- in contrast to Reagan's continued acceleration.  Had Reagan been in office an extra six months, his job creation-record would likely have surpassed Clinton's.

On the public-sector job side, The Atlantic does report some interesting news.  The size of the public-sector workforce appears to be way down under Obama, by about 750,000 jobs.  This is well below where the other presidents were at this point, even when normalized to population growth.

But when we look at the population-normalized data, another important finding jumps out.  Reagan, Clinton, and Bush 43 only slightly increased the size of the public-sector payroll relative to population growth.

So where is the money going?  The Atlantic claims that "[d]ecades from now, some lazy historian is in danger of confusing Obama for an anti-government radical."  Nothing could be farther from the truth.

Per-capita general government total expenditures in real terms under Obama have been -- and remain -- the highest in American history. 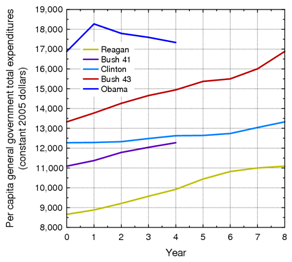 Although the per-capita public-sector payroll is decreasing rapidly under Obama to values not seen since the first Reagan term, per-capita public-sector expenditures are still at an all-time high.  Clearly, just reducing the size of the public-sector payroll is not the cost-containment solution.  We must also look at the ever-increasing costs per employee due to salaries, benefits, and pensions, as well as the exponential growth in infrastructure costs and the mammoth government contractor system.