Warning: mysqli_free_result() expects parameter 1 to be mysqli_result, bool given in /var/www/html/americanthinker/admin/common/functions/func.general.php on line 126
 The Myth of Red State Welfare - American Thinker
|

The Myth of Red State Welfare

To show how mindless this liberal proposition is, the "red state welfare" argument appears to be entirely based only on how each state voted in the most recent presidential election. This results in entirely junk science.

First off, states that are either "haves" (i.e., give more to the federal government than they receive) or "have-nots" (i.e., get more from the federal government than they give) do not just arise overnight. State finances take decades to develop as either "haves" or "have-nots," so looking at only a single election is meaningless. Rather, we need to look at how a state has voted over several decades to obtain any relevant insights.

Furthermore, it's equally nonsensical to just consider how a state votes for the president. We also need to look at how each state votes for its senators, representatives, and even governors. Given how Congress has the "power of the purse," this is core to assessing how a state's welfare status relates to its Democrat versus Republican voting record. And this is where the "red state welfare" hypothesis disintegrates.

The following table shows the percentage of person-years between 1980 and 2013 for which each of the top and bottom welfare states voted Democrat at the presidential, congressional, and gubernatorial levels. 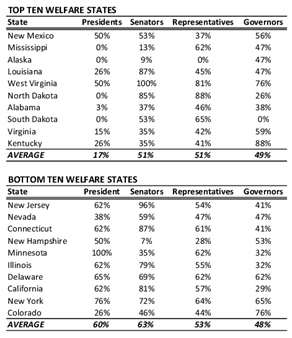 Clearly, the so-called red states are far more likely overall to vote for a Republican presidential candidate than his Democratic counterpart when compared to the supposed blue states. But look at New Mexico, West Virginia, New Hampshire, Nevada, and Colorado. New Mexico, Virginia, and New Hampshire have been evenly split on presidential candidates since 1980. Nevada and Colorado voted for both Bush 43 wins, and Colorado even went Republican during the 1996 Clinton landslide.

At the senatorial level, how can you call North Dakota, Louisiana, and West Virginia "red states" when their voting record is overwhelmingly Democratic over the past three decades? Even South Dakota and New Mexico fail the "red state" test. West Virginia hasn't had a Republican senator since before 1960!

On the other side of the aisle, New Hampshire -- supposedly a blue state -- has only elected a single Democratic senator (the currently serving Jeanne Shaheen) since 1980. Minnesota and Colorado also fail the blue state designation based on who they have put in the Senate over this timeframe.

Similarly, New Hampshire and Delaware have elected predominantly Republicans in the House, and somehow they are blue states? Colorado and Nevada also don't pass the blue state test, and as recently as the 111th Congress, five of Colorado's seven representatives were Republican.

The gubernatorial comparison also strikes a blow to any "red state welfare" claims. There is no significant general difference in the overall red versus blue character of these states' governors. South Dakota hasn't had a Democratic governor in over 35 years, whereas Kentucky has only had one Republican governor since 1971. California's governors have been dominantly Republican for many decades, as have those of Illinois, Minnesota, Connecticut, and New Jersey.

The "red state welfare" vitriol in the left-wing media has been intense. Witness these statements from a 2011 Business Insider piece on the topic:

"[R]ed states ... are overwhelmingly the Welfare Queen States. Yes, that's right. Red States -- the ones governed by folks who think government is too big and spending needs to be cut -- are a net drain on the economy, taking in more federal spending than they pay out in federal taxes. They talk a good game, but stick Blue States with the bill ... Go ahead and bookmark this article. The next time some smarmy teabagger tries to tell you it's liberals who are ruining the country and spending us into oblivion, kindly point them to the evidence that shows it is GOP states, not Democrat states, who are Welfare Queens. It is GOP states who spend more than they collect in taxes. It is GOP states who are out of balance, nationally. See if they still want to cut off funding when it means no more socialism for slave states."

Here is what Slate had to say last year:

"Now, one more cross-reference: these facts compared with the know-nothing rhetoric of the Tea Party. There are only two ways to parse that result: one is ignorance -- which we should be willing to forgive in anyone as long as they revise their views when faced with reality. And the second? Selfish hypocrisy. How else can you explain the fact that the denizens of the most welfare dependent states in the country -- dare we say, those who enjoy the most benefits from socialism -- profess to abhor welfare?"

Fascinating storyline the liberals tried to construct. Too bad it is entirely false.