Warning: mysqli_free_result() expects parameter 1 to be mysqli_result, bool given in /var/www/html/americanthinker/admin/common/functions/func.general.php on line 126
 Ted Cruz: An American Moses? - American Thinker
|

Rafael Edward "Ted" Cruz, junior senator from Texas, embodied a powerful role with deep resonance in his marathon fight on the Senate floor against Obamacare. He has rightly said of the battle America is currently involved in with Barack Obama and his ghoulish army of liberal Democrats: "This is life and death." And well it is!

"Life and death" is exactly how many Americans view the "train wreck" called ObamaCare. Unlike the unwashed masses, the president, Congress and all their staffers, as well as a chosen few others will be immune. Meanwhile, the rest of America is jammed into an oversized freight car while the Conductor-in-Chief directs it and us over the edge of a cliff.

Although many remain clueless, the truth is that the dire Obamacare situation is of biblical proportions. Whether Americans realize it or not, if Obamacare is not stopped, the nation will embark on a 40-year slog through a healthcare wilderness that will result in very few of us, if any, making it out alive.

That's why Ted Cruz (R-TX) has become a political Moses for many. Cruz's small circle of allies includes Senators Rand Paul (R-KY), Marco Rubio (R-FL), Mike Lee (R-UT), and Jim Inhofe (R-OK), all of whom can be likened to antiquity's Joshua, Aaron, and Hur, the men who supported Moses during the battle against the Amalekites.

Here in modernity, the goal of the small but brave Cruz minority is to either defund ObamaCare or shut down the government, thereby putting the brakes on that runaway train.

Cruz choosing to defy Barack Obama and stand toe-to-toe with Senate Majority Leader Harry Reid is reminiscent of what happened in Scripture at Rephidim when the Israelites responded to an Amalekite attack. It was there that Moses instructed Joshua to "Choose some of our men and go out to fight the Amalekites. Tomorrow I will stand on top of the hill with the staff of God in my hands."

As Joshua fought the enemy, Moses, Aaron, and Hur ascended to the top of the hill. Throughout the battle, Moses raised his arms with his staff in his hands, and as long as his arms were raised, the Israelites were victorious.

Like a modern-day Moses, Ted Cruz has taken to the Senate floor to stand firm against a ferocious enemy called ObamaCare. 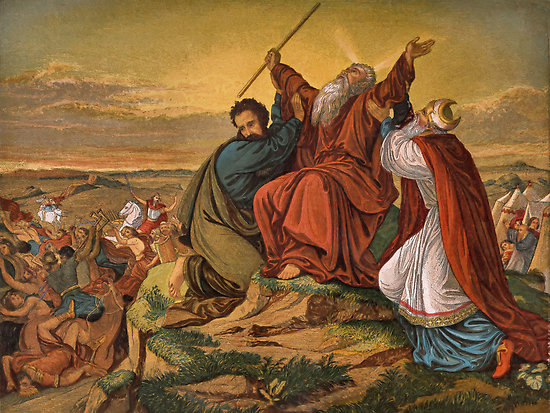 In Scripture, when Moses grew weary and lowered his arms, the tide turned in favor of the Amalekites. The Bible says that Aaron and Hur provided a stone for their leader to sit on and the men held up Moses' hands, "one on one side, one on the other -- so that his hands remained steady till sunset." Regrettably, Senator Ted Cruz did not have the luxury of sitting; he stood for 21 hours straight, but he did have a team to hold up his arms, so to speak.

In an effort to prevail over the army of ObamaCare advocates, along the way Senators Paul, Lee, Rubio, and Inhofe were joined by David Vitter (R-LA), Jeff Sessions (R-AL), and Pat Roberts (R- KS), who, like modern day Moses-helpers, stood up alongside Cruz, in effect holding up Cruz's hands.

Cruz had this to say about "principle" and "standing for integrity":

Moses' upheld arms assured that Joshua was able to overcome the Amalekite army. So, shod in black tennis shoes, Ted Cruz is a political Moses of sorts. Regardless of what the Washington DC establishment believes, in the hearts of millions, Cruz continues to articulate the fear and disgust a majority of Americans feel about being forced against their will into ObamaCare.

Thus, Reid stepped forward, pulled rank, and shut Ted Cruz down, ending the Texas senator's unofficial filibuster. But not for long! With the help of Rubio, Lee, Paul, and even Jim Inhofe, Ted Cruz will continue to 'stand' in the fight to beat back the Obamakites and their destructive policies.

Senator Cruz is certainly not done standing; he will continue to stand, even though he is no longer speaking on the floor of the Senate. For the rest of us who stand with him on the side of freedom, let's join together and continue to hold up Cruz's arms and extend to him the heartfelt appreciation of a grateful nation.