Warning: mysqli_free_result() expects parameter 1 to be mysqli_result, bool given in /var/www/html/americanthinker/admin/common/functions/func.general.php on line 126
 Takeaways from the Zimmerman-Martin Tragedy - American Thinker
|

Takeaways from the Zimmerman-Martin Tragedy

For well over a year, Americans passionately debated whether George Zimmerman wrongfully ended Trayvon Martin's life. The Zimmerman trial gripped the nation like no other since O.J. Simpson's.  While it was encouraging that so many people took a heartfelt interest in justice being done, it's a shame that the tawdry professional race-grievance industry decided to exploit this case for their own self-serving ends and turned it into something of a circus.

At this stage, everyone's opinion about Zimmerman's guilt or innocence is settled.  It's time to move on from what is rightly regarded as a terrible tragedy -- one young man's life cut short and another's turned into a living hell, all because of a chance encounter between two strangers that somehow escalated from initial visual contact to a lethal denouement.  What follows isn't about Zimmerman's guilt or innocence or race or whether our court system serves justice well. It's about several important, life-and-death lessons that we can derive from this case.

First, while the trial properly focused on determining Zimmerman's culpability, if we look at the incident from a broader context, every hood, punk, or thief who has burgled a house contributed to Martin's untimely death.  [Note to my fellow conservatives: I realize I am playing the liberals' game here by raising the prospect of collective guilt, but please indulge me while I seek to make a point in terms that they will understand.]  Those who blame the "neighborhood watch" phenomenon -- civilians not employed by a law enforcement agency carrying guns and guarding their neighborhoods -- for Martin's death are not following their line of reasoning far enough.  People have taken these steps in response to thefts and burglaries, perpetrated by malefactors of various races and age groups. 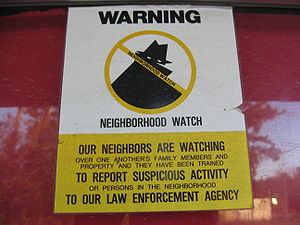 No burglaries, no neighborhood watches -- it's as simple as that.  What this means is that every burglar and thief is responsible for triggering the chain of events that culminates in neighborhood watch programs -- programs that, in effect, launch a Russian roulette dynamic whereby somebody eventually gets killed (and sometimes not a person who was intending to commit a crime, but just an unlucky person).

Second, adults need to do a better job of teaching kids -- especially hormone-charged youth in men's bodies but still with adolescent emotions -- to be wise about avoiding needless conflicts.  I can hear my long-departed Pop counseling me, "Don't start something you can't finish," or "When the other guy has home-field advantage, be extra careful."  It isn't fair (and I know this from painful experience) when someone jumps to the conclusion that you're up to mischief when you're not, but whatever Zimmerman said to Martin -- even if he diabolically egged him on by saying something offensive -- the smart thing to do would have been to swallow his pride, be cooperative, and walk away to live another day.  Forget about "fairness" or finding out who can kick whose butt -- just back off and live.  Dads, uncles, big brothers, and other mentors need to teach young men is that physical confrontations with strangers are what are known in the investment world as a poor risk-to-reward ratio -- i.e., the downside potential is a lot greater than the upside, so don't play that game.

Third, the most important takeaway from the Zimmerman-Martin tragedy is a lesson that our entire society needs to learn.  It is the most important and fundamental political question of all, the major philosophical difference that so effectively divides liberals and conservatives: The question of the proper relationship between citizens and government -- more specifically, whether individual rights or government power is primary and should have the upper hand.

The American philosophy holds that everything starts with individual rights -- that rights are primary and government power is derived from and remains subordinate to those rights.  Liberals, by contrast, believe that government power leads the way to a better world, and so they regard individual rights as an inconvenient anachronistic nuisance.  Thus, in the aftermath of the Zimmerman trial, liberals have fumed about "stand your ground" laws and objected to private civilians using guns to defend their neighborhoods on the grounds that such policies "upset a basic social order by, in essence, deputizing citizens."

Liberals have it completely, 180 degrees backward about who deputizes whom in a free society.  In the most fundamental sense, governments don't deputize individuals, but free individuals deputize government.  As Jefferson put it with such pellucid eloquence in the Declaration of Independence, "Governments are instituted among Men" "to secure [our individual, God given, "unalienable"] rights."  Our rights come first, and the collective force of government is legitimate only when it upholds those rights.  To say that a policeman has the legal right to use lethal force to protect us, but that we ourselves don't have that right is absurd. In legal terms, we, as individuals, are the "principals" and government serves as our "agent."  In an ideal world, the police would always be present to protect us in our moment of need, but in reality, they usually are not present at when we need them, so it is up to us, then, to exercise our right to defend our own lives.

Liberals tend to think that individual rights are superfluous and perhaps even an inconvenient obstacle to the attainment of a better world through the wonders of government planning and control.   Thus, Illinois Senator Richard Durbin has tried to use the Zimmerman "not guilty" verdict as justification for a witch-hunt against his political opponents (i.e., conservatives) -- essentially demanding that corporate officers publicly confess if they support "stand your ground" laws.  Such a position disrespects individual rights.  By demanding that those being confronted by aggression have the duty to yield instead of demanding that the aggressors stand down, Durbin tilts the field to the advantage of those who violate the rights of others, thereby disparaging those rights.  This is the same warped ideology that impelled liberals to appease rather than resist Soviet aggression during the Cold War.  Only in the liberal imagination resides the belief that the way to a more just, peaceful world is for innocent people to yield and surrender to criminals and aggressors.

Trayvon Martin's death was a tragedy.  But for Americans to react to the tragedy by adopting laws that nullify their individual and collective right to defend their person and property would cause a far larger number of people to be hurt.  That would be worse than a tragedy; it would be a disaster.

Mark Hendrickson teaches at Grove City College and writes the blog No Panaceas at forbes.com. www.forbes.com/sites/markhendrickson/