Warning: mysqli_free_result() expects parameter 1 to be mysqli_result, bool given in /var/www/html/americanthinker/admin/common/functions/func.general.php on line 126
 Strategic Blindness in Syria - American Thinker
|

War is a messy business. Serial wars get even more untidy over time. Often, it's hard to know where one begins and another ends. Such is the case today as the Arab spring looks like another Muslim winter. America and Europe stumble from one conflict venue to another wondering what happened to all those rosy assertions about jasmine, justice, moderation, and modernity. The Islamic world is a mess and no one has a clue as to where or how the sequential mayhem ends. In Syria, the nanny states of the West are again perched on the brink of another sectarian and/or tribal abyss.

Nonetheless, the optimism of intervention still prevails. Today you hear argument after argument about the responsibilities of power and success -- or preaching about very selective humanitarian concerns.  If you read enough foreign policy analysis you might come to believe that someone has the answer, or that somehow Europe and America have the "responsibility" to make the Third World well. Never mind that the very words "developing" and "emerging" have become geo-political oxymorons, triumphs of hope over experience.

So too, "red line" moralizing.  Alas, the no-fault/default cultures of Europe and America are unlikely enforcers of any kind of norms and standards in the less civilized world. The West insists, ironically, on measures of accountability and restraint that have been abandoned in Europe and America. Political decay, especially in the First World, has consequences.

All the rhetoric about global responsibility is a rehash of the "white man's burden" trope. Worse still, the hand-wringing and preaching seems to validate "orientalism," guilt-driven theories that excuse and forgive Muslim pathology because the chaos is thought to be the results of European racism, colonialism, or exploitation.

Ironically, much of the confused strategic rhetoric originates with senior military officers and the Intelligence Community.

Since Vietnam, the Pentagon has sought to redefine most wars as either guerilla, insurgent, or conventional conflicts. Conventional conflict is a distant third in most deliberations. Real wars might have to be declared and put to a vote. Unfortunately, the accepted taxonomy ignores ground truth and the worldview of likely opponents.

Most wars in the troublesome Muslim world are in fact religious wars, conflicts where the nexus is a clash between religious and secular values. The most obvious evidence of religious war, external to the Muslim world, occurs at the tectonic plates of religion, those borders where Muslim and non-Muslim polities meet. South Asia, North Africa, the Balkans, the Caucasus region, Thailand, and the Philippines are obvious examples. Even China has pockets of Muslim irredentism.

When ayatollahs and imams rant about "jihad," or holy war, they have few illusions about the nature of contemporary conflict. Indeed, most Muslim clerics seem to grasp global strategic reality better than American generals who insist on parsing various Muslim wars into local insurgencies with local motives. Religion has become the invisible camel in the infidel tent.

The most celebrated version of the official US military view in these matters is contained in Army Field Manual 3-24; Counterinsurgency, the doctrinal bible that David Patraeus helped write and subsequently rode to four star notoriety. Unfortunately, like too many of his over-schooled peers, General Patraeus is more likely to be remembered for his social life than his military insights or battlefield achievements. Equally misguided was the US Marine Corps decision to adopt the Army manual in the interests of tactical ecumenism.

Religious war is now a global phenomenon, thanks in part to the failure of flag officers to acknowledge that threat. The Pentagon doesn't have any official guidance for religious war beyond political correctness.

Within the Ummah, modern wars are of two types; civil and proxy. Contemporary revolutions in Iran, Algeria, Tunisia, Libya, the Sudan, Somalia, Mali, and Egypt are religious civil wars. These in turn are of two classes; sectarian (i.e. Shia vs. Sunni) or secular/sectarian. Secular military dictatorships, Egypt today for example, have been in the clerical crosshairs since Mohammed's time. Libya and Syria are examples of secular oligarchies where tribal rivalries created opportunities for Islamists.

Syria is a prominent example of modern proxy war, where principals (Russia and the US or Iran and Israel), once removed, are attempting to settle old scores or exploit a regional opportunity. Any notion of moral "red lines" or WMD thresholds in Syria is just another flight from reality, a veil for political egos and hidden agendas.

The American Ranch Hand campaign (1962-71), which poisoned Southeast Asia for nearly a decade, was the most egregious, sustained modern use of chemical warfare. Granted, the putative aim of the Agent Orange campaign was defoliation; still, the net effect was to poison civilians and water sources under the canopy. No American administration is well-positioned to point fingers at Syria when the US Air Force, the Pentagon, and the White House have yet to acknowledge or accept responsibility for the mutilation of a generation of American GIs and several generations of Vietnamese children.

We might also recall those gassed Kurds and Persians (1988) of recent memory, who perished from indifference if not complicity. Or we could mention the million or so Rwandans (1994) who fell to tribal clubs and cutlery. Such events barely make the evening news in the West. With these and Vietnam, moral superiority about chemical warfare or genocide, if it ever existed, is a void not a high ground.

The recent gas attack in Syria is not an exception, nor is it a rule. Identifying culprits is probably irrelevant.  Nations adhere to international conventions or "norms" as it suits their interests. Credible force is the only reliable sheriff or deterrent. And a false flag prologue is often the pretense for the use of force.

Clearly there is more than a little overlap in any conflict taxonomy. Nonetheless, the need for a new vocabulary for the age of intervention is underwritten by two indisputable facts: religion underwrites much of the typology and too many conflicts are misrepresented as insurgencies when they are in fact civil wars.

The insurgent paradigm suits the politics, not the reality, of modern war. Terms like Islamic, religious, or "civil" war are avoided because the US military has no charter, doctrine, or legal authority for intervention in overseas internal disputes; and surely no moral authority for taking sides in religious rivalries. The Sunni tilt in American foreign policy since 1979 speaks for itself, a grim litany of blowback and failure.

At a minimum, you could argue that American intervention has made Shia fanatics, Hezb'allah, the Taliban, and now a global al Qaeda possible. Recall that America helped create a vacuum in southern Lebanon for Hezb'allah to fill. Recall also that clandestine support to the Mujahedeen in Afghanistan in the Soviet era made the Taliban possible. Imprudent signals to Islamists made the recent Muslim Brotherhood electoral success possible in Egypt too. In the geo-political arena, unqualified support for Saudi and Emirate oil oligarchs makes Salifism and related religious fascism possible worldwide.

The incompetence of intervention has more than a little to do with the caliber of American generals since Korea. Surely, David Patraeus was no guerilla fighter like Joe Stillwell and Martin Dempsey is no cavalry officer the equal of George Patton. At Benghazi, American military honor was compromised by timidity, if not bureaucratic cowardice. General Dempsey claims that he did not act because Mrs. Clinton didn't give him a green light.  Under Dempsey, the military ethos changed from "no man left behind" to "cover your behind."  Victory is no longer a staple of any flag officer's resume or vocabulary.

The Intelligence Community is also part of the rhetorical decay. While at the White House, John Brennan literally scrubbed any reference to Islam, Islamists, jihad, or holy war from public and administration conversations about national security. He actually convinced most government departments, contractors, and the media to delete any language that might suggest linkage between terror, religious war, and Islam. The Director of National Intelligence now refers to Islamic terrorists as "nefarious characters." At CIA, Brennan is now well placed to police the language and analysis of National Intelligence Estimates.

And the chickens of strategic decline are home to roost as America again sides with the Sunni in Syria.  Dithering in the West for two years has allowed Bashar al-Assad to regain the tactical advantage on the battlefield.  And strategically, the Alawite regime now has a clear victory.  American gun sights have been lowered from regime change to "let's make a deal."  Never mind that time is as good a gift to Assad as any aid from the Persians and Russians. 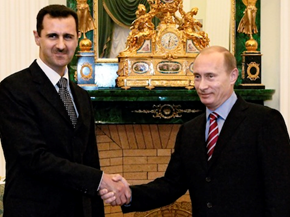 And the proxy war is a disaster. Vladimir Putin throws a 'Hail Mary' in Syria, and Foggy Bottom and the White House morph into cheerleaders. Worse still, the American administration embarrasses itself by trying to take credit for the Russian initiative. Say what you will about Putin, he is a better friend to Syria than Obama is to Israel. When the next "red line" is in the works, it might have to be drawn around Israel.

The Russian strategy may look a little like a deus ex machina, but compared to the Obama amateurs, Putin plays the great game like Winston Churchill. And putting John Kerry in  a diplomatic cage match with Sergei Lavrov is like watching  a bear  eat a cocker spaniel. Checkmate in Baghdad and Damascus!

G. Murphy Donovan is a Vietnam veteran who provided intelligence support to Ranch Hand at Tan Son Nhut AB in 1968 and 1971. He writes occasionally about the politics of national security.