Warning: mysqli_free_result() expects parameter 1 to be mysqli_result, bool given in /var/www/html/americanthinker/admin/common/functions/func.general.php on line 126
 Remember to Unplug the Refrigerator, Conservatives - American Thinker
|

Remember to Unplug the Refrigerator, Conservatives

In one of his more disgraceful outbursts, John McCain recently blasted Ted Cruz:

Speaking after Cruz had the floor for 21 hours and 19 minutes, McCain said he took umbrage at the Texas senator's efforts to pressure other Republicans to get behind his strategy for fighting President Barack Obama's signature health care law.

Maybe I am misreading McCain's response to Cruz, but I infer that the implication here is: we are all slaves by nature and must submit to whichever coterie has attained power over the ever-growing and self-enriching amoeba of Washington, D.C.

I felt hurt.  Then I felt angry.  Then I wondered if there is some deeper metaphysics to what McCain said.  Is he perhaps striking at some eternal wisdom about the human condition -- resistance is futile?

Or is John McCain just very old?  I don't think McCain does metaphysics, or anything visionary.  He does money, politics, and "maverick" self-dealing.  But the larger philosophical quandary of Ted Cruz's twenty-one-hour marathon of rhetorical martyrdom remains.  Like the vast majority of people who write and comment on American Thinker, I'm a fan of what Cruz did.

But it is important to explain to ourselves, so we have clarity, why it was more than a futile gesture.

By standing against such momentous opposition, mockery, and sabotage, Cruz reminds us that none of us is without some tools at our disposal to resist tyranny.

Even me.  The fact that I could connect my own situation to Ted Cruz is quite significant.  I would usually feel utterly disconnected from and dwarfed by anybody famous and powerful serving in elected office.

If there's one thing I know from my bizarre life experience, spending forty years immersed in gay culture, it's camp.  Before gay men became obsessed with surgically altering people's genitals and forcing middle schools to teach boys about ways to stimulate the prostate, gay men learned most of what they needed to know from Hollywood divas.  My lodestars were always the wholesome girls next door like Shirley Jones, Doris Day, and Audrey Hepburn.  Some gay men loved the tragic figures of Edith Piaf, Judy Garland, and Billie Holiday.  Still others venerated sex kittens like Mae West or castrating villainesses like Joan Crawford and Bette Davis.

Allegories are powerful things.  Once upon a time, not that long ago, actually, gay people tried to survive by watching movies, not by flying to Washington to file briefs in Supreme Court cases so they could avoid paying the death taxes on their partners' $3,500,000 estates.

Strong female characters who navigated the obstacles of a world stacked against them provided lessons for another population facing obstacles -- people with same-sex attractions.

And so one camp classic that I've never forgotten is Wait Until Dark, a 1960s play adapted into a film directed by Terence Young and starring Audrey Hepburn.  In addition to the delectably over-the-top 1967 film, I also saw the play live, complete with its climactic 25-minute death struggle, at Buffalo's Studio Arena when I was a boy. 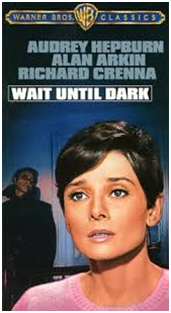 Connect with your inner camp aficionado and consider the adorable ridiculousness of the film.  The plot is deliciously contrived so that Hepburn's character, Susy Hendrix, is blind, and trapped inside her apartment with a corpse and a killer who's looking for a doll full of heroine, with the phone lines cut.  Susy's photographer husband has been duped into a wild goose chase in Asbury Park.  There is nobody to help poor blind Susy but a pudgy little girl with glasses who lives upstairs.

Indulge me for some allegory, if you will: Susy Hendrix is perfectly analogous to conservatives on the eve of ObamaCare being implemented.  Handicapped beyond belief, wildly outnumbered in the media and academia, threatened by the IRS and the NSA and the Federal Elections Commission if we make a peep of protest, we aren't that far off from being an elegant and righteous but frail 100-pound white woman who can't see anything, locked in a death trap doused in gasoline, ready to be blown up or stabbed or choked to death by an opponent twice our size.

Liberals say Republicans are "holding America hostage" by opposing the Affordable Care Act, but the fact that they control the House is due to the fact that the American people revolted against said law in 2010 and sent a Republican majority to the House.  They wouldn't be doing their job if they didn't resist the implementation of this monstrosity.

Still, innocence is no replacement for strength.  Like Susy Hendrix trapped in a basement apartment with a dead man and a killer with nobody to save her, we're right, but we're terribly disadvantaged -- almost hopelessly so.  The president will veto whatever we do, we'll get blamed by the legion of biased professors and reporters, the intelligence community will start bugging our phones, the IRS will mysteriously leak our tax returns to the gay storm troopers at the Human Rights Campaign, and many of our neighbors (even family) will be brainwashed by the fabricated consensus around us to demonize our position as unpatriotic.

Maybe it's best to surrender.

Wait.  Was it best for Susy Hendrix to surrender to Alan Arkin's cheap bad guy character?  Just hand over the doll full of heroine and hope he won't set fire to the whole place with Susy in it on his way out?  What would Audrey do?

She turns what makes her weak into a strength!  She's blind, and the bad guy who wants to kill her isn't.  So she smashes all the light bulbs in the apartment until it's completely dark.  Now the bad guy's only option to see his way around is to light a match, but he can't do it, because Susy's managed to feel her way to the gasoline bucket, and she's doused him, too.  While Alan Arkin stumbles over the furniture and bumps into walls, Susy knows her way around in the dark.  She manages to fish a knife out of the kitchen rack and stab the criminal in the belly.

The only thing she forgot to do was unplug the refrigerator.  Just as she thinks she's going to be able to climb out a window, the bad guy rises from his slump, pulls the knife out of his belly, and follows after her, using the light of the propped-open refrigerator to see where Susy's going.

Stage versions vary in how they stage the ending.  In Hepburn's film version, she succeeds in barricading herself between the refrigerator door and the wall and yanks out the electric cord for the fridge just in time!  Seconds later her husband returns, accompanied by the police, who break down the apartment door armed with flashlights, only to see Alan Arkin's thwarted body drowning in a pool of his own blood.

Wait Until Dark is only one hour and forty-seven minutes long, so it's easier to digest than von Clausewitz and Sun Tzu.  The camp lesson is simple: when the other side is strong, don't fight them on their terms.  Fight on the terms that you know and control better than they do.  Turn your weakness into a plus.

Conservatives will not gain anything by strategizing about how to succeed within standard congressional procedure.  Pull the plug.  Change the game.  Take away the "power" that the other side feeds on -- in Susy's case, light; in our case, respect for conventional opinion.  Be unconventional.

Maybe we will win big in 2014.  Maybe we won't.  In some ways, fighting over who's going to look good or look bad in 2014 or 2016 is the equivalent of Susy Hendrix trying to fight with the lights on.  Ted Cruz has drawn liberals into a rhetorical battlefield that they aren't equipped to deal with, because they've made all of their surroundings safe by co-opting or intimidating anybody who has a counter-argument.  Just by wandering off the acceptable scripts, Cruz changed the game.

But there is one thing we have to be careful of: make sure to unplug the refrigerator.