Pope Francis Said What?! Actually, No, He didn't

That NBC had doctored a 911 call for the purposes of making George Zimmerman look like a bigot was a shocking revelation. Yet cut-and-paste propaganda is a common media tactic, and I'm not sure anyone is victimized by it more than Pope Francis.

You've probably read the headlines. "Pope Francis urges global leaders to end 'tyranny' of money," "Pope Francis's stunning blow to conservatives," "Pope Francis assures atheists: You don't have to believe in God to go to heaven," "Pope Says Church Is 'Obsessed' With Gays, Abortion and Birth Control"; rinse, wash and repeat. Yet these headlines range from delusion to, possibly, deception. By and large, he said, she said is not what the pope said.

Let's start with the recent big news, the Jesuit magazine interview with Pope Francis called that "stunning blow to conservatives." The stunned (and stunted) journalist who wrote that line, the Guardian's Andrew Brown, used a Francis "quotation" prevalent throughout the media. To wit: "It is not necessary to talk about... abortion, gay marriage and [contraception] all the time." Now, it's not surprising Brown didn't provide a link to the actual interview. Because not only is his cut-and-paste job missing an ellipsis (between "and" and "all the time"), it's an elliptical formulation that omits 58 words -- and 58 miles of meaning.

After saying he hadn't talked about abortion, marriage and contraception much, here's what the pope actually stated: "The teaching of the church, for that matter, is clear and I am a son of the church, but it is not necessary to talk about these issues all the time [emphasis added]." The media didn't omit the italicized words merely for brevity's sake. When Francis said that the teaching is "clear" and he's a "son of the church," he is reaffirming doctrine and his fidelity to it. He's saying that the teachings in question are definitive, set in stone, and that he is loyal to mother Church as any good "son" is to his mother.

Ironically, the pope, whom Catholics believe is Christ's representative on Earth, is receiving the same treatment Jesus himself did. Many liberals make their case for homosexual behavior by saying that Christ was silent on it. Of course, Jesus didn't say anything about pedophilia, either; this doesn't mean He would have tolerated it. Likewise, it's as silly to think that dogma is null and void unless continually espoused as it is to assume that a law is no longer on the books just because legislators don't talk about it constantly. 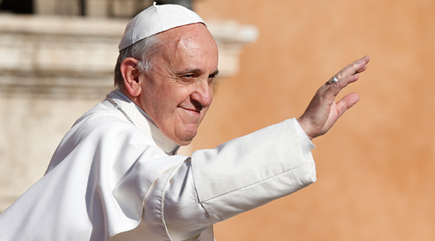 Of course, one could still find fault with Francis's comments. While "all the time" was surely just a manner of speaking, in reality I hear far too little sermonizing at Mass about the moral teachings in question. Instead there's much nebulous talk about "love." And while love is wonderful, I'd point out that a good physician makes the correct diagnosis and treats what the patient has, not what he doesn't have. There is no powerful social movement whose placards state "Down with Love!" and "Give Hate a Chance!" As far as abortion and marriage go, however, the left has sought (and largely succeeded) in changing a tried-and-true status quo, and traditionalists' talk about these issues is simply responses commensurate with the left's cultural-attack talk. We don't hose people down indiscriminately; we simply try to douse as many fires as the cultural pyromaniacs light.

Having said all this, the main difference between Pope Francis and his two predecessors is one of style, emphasis and tactics, not dogma. Dogma cannot be changed.

One problem between the pope and secular world involves communication breakdown: terms and phrases have different connotations, and sometimes different meanings, to a devout Catholic than to a modernist. Consider, for example, Francis's July remark about homosexual priests, "[W]ho am I to judge?" This was widely viewed as deviation from Catholic doctrine, but the pope averred otherwise in the Jesuit interview, explaining, "I said what the catechism says." But what long-held Catholic doctrine did Francis's comment reflect?

The catechism states that while homosexual behavior is gravely sinful, homosexual tendencies are not (the catechism labels them "disordered"). This is simply common sense. A person generally doesn't ask for the feelings he has, and they often result from early childhood influences over which he has no control. His responsibility lies in whether or not he chooses to act upon those feelings.

This brings us to the rub: when the pope says "homosexual," he thinks of a person with the tendency, but takes for granted that a priest so burdened will strive to live a celibate life. When secularists hear the word, however, they generally think of a person engaging in homosexuality. Thus, while Francis was saying he wouldn't "judge" a person bearing the homosexual cross nobly, the secular world heard, "I won't judge the behavior."

This misunderstanding is easy to fathom. "Who am I to judge?" has become a code-phrase meaning, "There's nothing wrong with homosexual acts." But the pope is not of our culture; he's a South American, and I suspect he didn't understand the code-phrase and how it's interpreted by secular Western ears.

But some "interpretations" of the pope's words are, damnably, much farther afield. Consider the Independent's headline: Pope Francis assures atheists: You don't have to believe in God to go to heaven." Not surprisingly, this paper also suddenly forgot how to use the hyperlink feature in its reportage (what the pope actually wrote).

But Francis never said "You don't have to believe in God to go to heaven."

In fact, he never used the word "Heaven" in what was a 2688-word letter even once.

What the pope said that the media is spinning was, "God's mercy has no limits if you go to him with a sincere and contrite heart. The issue for those who do not believe in God is to obey their conscience." The Independent also quotes the pope as saying, "Sin, even for those who have no faith, exists when people disobey their conscience." Perhaps the paper has a (much) different translation from the Italian, but I find that line nowhere in the letter. Anyway, the letter is actually quite good on balance. As for insight into what Francis meant, space constraints here preclude deep theological expositions, but The Telegraph's Tim Stanley provides a decent explanation here.

Yet the Telegraph also had its Independent-of-truth moment when publishing, "Pope Francis urges global leaders to end 'tyranny' of money," which, as you could guess by now, also omits a link to the pope's actual words. The paper writes, "He [the pope] said free-market capitalism had created a 'tyranny'.... [That is,][u]nchecked capitalism had created 'a new, invisible, and at times virtual, tyranny', said the former Cardinal Jorge Bergoglio."

Francis never used the phrase "tyranny of money" or the term "free-market capitalism."

In fact, he never mentioned "capitalism" or the "free market" even once.

The pope's actual theme in what in this case was a speech, was that financiers, politicians and economists should cultivate a God-centered ethics, and Francis used the word "ethics" or "ethical" eight times and "God" four times in a speech that took mere minutes to deliver. And author of the Telegraph article, Nick Squires? He used the word "ethical" just once... in passing.

He didn't mention "God" at all.

And while he didn't present his cut-and-paste, add-and-subtract, mix-and-match formulations as direct Francis quotations, many readers would either assume they were or, in the least, wouldn't figure that he had "Zimmermanned" the pope. But it's not surprising the media is reluctant to report on a God-centered ethics.
They, apparently, are sorely lacking in it themselves.

Yet there are many reasons why media distort the pope's words. First, they'll do anything for eyeball-grabbing headlines. Second, Catholic theology has been forged over 2000 years, is very deep, and thus doesn't lend itself to sound-bite presentation. More significantly, it cannot be understood by sound-bite commentators with 15-second attention spans who, sadly, interpret things knee-jerk style via the prism of their own prejudices. Third and in keeping with this, liberals exist in a realm of rationalization, anyway, and thus can truly convince themselves that their feelings-derived "sense" of someone's meaning is gospel. The fourth factor is simple.
Leftists are dishonest.

Yet even many well-meaning people don't understand the Church. For one thing, there's the aforementioned factor: the secular and devout Catholic worlds often speak different languages, with words and phrases holding different meanings. As for doctrine, the Church isn't some journalist with hormone-imbalance-induced mood swings. Defined doctrine (dogma) cannot change, and new doctrines won't be forged with reporters. What a pope says in an interview doesn't change doctrine any more than what a president says in an interview changes American law.

But then there is a more insidious reason for the media's papal spin. Not only do the militant secularists assume the Church will eventually "get with the times" and embrace its agenda (it feels so obviously correct, you see), but they know if they can break the Catholic Church -- if they can get its imprimatur -- cultural domination is theirs. And, hey, if you can't break it, fake it. With image being "reality," making the low-info masses believe the Church has "seen the light" may be sufficiently demoralizing.

The last significant factor is one I'd like my Christian brethren to consider very, very seriously. By creating the illusion that the Church is abandoning certain unchanging moral principles, the media can widen the rift between the Church and some traditionalist Protestants. Beware the divide-and-conquer devils among us.

Having said all this, Pope Francis certainly gives the media much grist for the mill. One issue is his gregariousness -- he said he loves being around people -- and he talks to anyone and everyone about anything and everything. This is dangerous for any public figure. Moreover, while the pope is orthodox, and in that sense neither liberal nor conservative, Catholic doctrine doesn't address every issue and all its nuance. And given that Francis's instincts are, it seems to me, somewhat modernistic, I'm not confident in his pronouncements on matters beyond doctrine (or in his sense of priority). I think his grasp of economics is especially suspect.

And while the pope's tactic of stressing Christ's love and salvation message to the exclusion of certain moral doctrines is well-intended, I don't believe it will work. The militant secularists aren't interested in conciliation or compromise, but in the complete and utter destruction of Christianity. They take no prisoners.

So say your prayers; they're needed now more than ever. And I will say that Pope Francis may inspire me to expand my prayer life. For the first time ever I may start praying for laryngitis.