Warning: mysqli_free_result() expects parameter 1 to be mysqli_result, bool given in /var/www/html/americanthinker/admin/common/functions/func.general.php on line 126
 Party of the Rich? That's the Democrats - American Thinker
|

Party of the Rich? That's the Democrats

As we continue to knock down individual members from the long list of liberal talking points, another we can add to the scrap heap of history is that Republicans are the "party of the rich."

The US Census Bureau has released its latest installment of "Income, Poverty, and Health Insurance Coverage in the United States," a document that includes measures of household income dispersion.

The following figure shows the change in share of household income going to the top 5% and the highest quintile (i.e., top 20%) over each presidential term since Reagan. 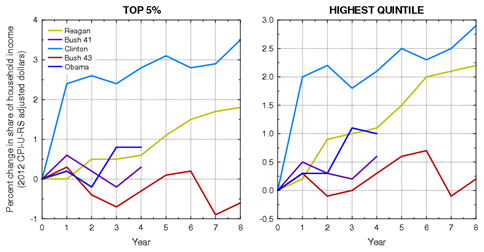 Well, now.  This doesn't fit the liberal narrative very well.  Clinton increased the share of household income going to the top 5% by a whopping 3.5% during his two terms, double the rate of Reagan at only 1.8%.  After four years, Obama increased this share to the rich (0.8%) more than Reagan had following his first term (0.6%).  Bush 43 actually dramatically decreased the share of household income headed to the top 5%, and his father saw only a very small increase.

We see the same message in the share of household income for the highest quintile.  Clinton is well out in front in terms of increasing the income share for the highest 20%.  Reagan and Obama are in an effective dead heat after their first four years.  After four years, the Republicans average a 0.7% increase; the Democrats are at +1.6%.  After eight years, it is Republicans at +1.2% and the Democrat at +2.9%.

But the Democrats are the party of the middle class and the poor, aren't they?  Wrong again.  The following plot shows the change in share of household income going to the third quintile (i.e., middle class) and the lowest 40% over each presidential term. 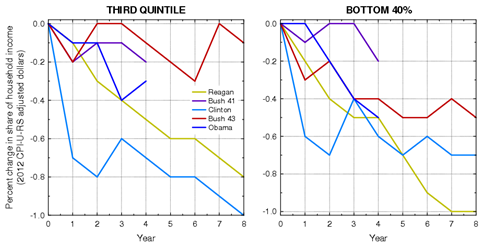 In his first term, Obama has decreased the household income share going to the lowest 40% by 0.5%, the same decrease as Reagan after four years, and more than either Bush 41 (-0.2%) or Bush 43 (-0.4%).  Clinton leads the way in this statistic, decreasing the income share going to the poorest members of society by 0.6% after four years in office.  After eight years, the two Republicans average out to equal Clinton at a 0.7% reduction in the income share for the lowest 40%.

Another liberal storyline in shambles.  Could it be that "Reaganomics" and the "Bush tax cuts" actually favor the middle class more, and the rich less, than the corresponding liberal policies enacted under Clinton and Obama?  Nearly three and a half decades of data suggest that this may be the case.  Of course, there is nothing wrong with being rich -- and promoting the acquisition and protection of wealth -- but if liberals persists in using these terms pejoratively, they may find that the data works against them.