Warning: mysqli_free_result() expects parameter 1 to be mysqli_result, bool given in /var/www/html/americanthinker/admin/common/functions/func.general.php on line 126
 Obama and Syria: Words versus Deeds - American Thinker
|

Obama and Syria: Words versus Deeds

In trying to puzzle out what might be going on with President Obama's muddled, non-strategic, and fundamentally "unserious" approach to Syria, it helps to remember that Obama believes that words are as good as deeds, perhaps even better -- especially when those words are uttered by Obama. He has concluded that words serve a convincing purpose in the moment, that one utterance does not have to be consistent with the next to be credible and serve that purpose, and that none of it has to be followed up with action to be effective. 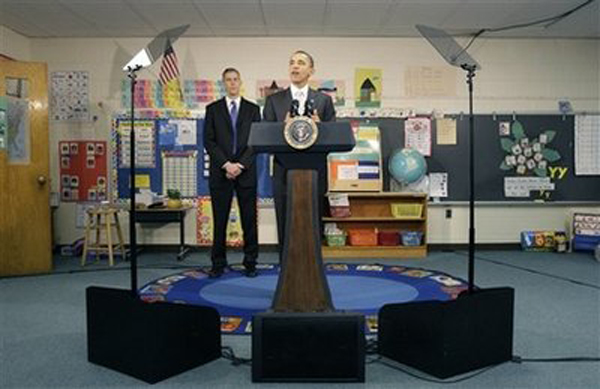 And why wouldn't he? Words have gotten him to the pinnacle of the US presidency without deeds ever having been necessary.

Obama has been told for much of his life that he could and even should be president. As best we can tell, he was accepted to Harvard Law School without an especially stellar record of prior academic achievement. While there he became president of its august Law Review, through the mechanism of an election that was basically a popularity contest. Because he was the first black person to hold that position, the event merited coverage in the New York Times and later led to Obama's being signed to a book contract, although he had never written a book before and done a minimal amount of academic writing in general -- including virtually none for the Law Review even as its president, which is a highly unusual state of affairs.

On graduation Obama was quickly offered a position at another highly-respected institution, the University of Chicago Law School, although he lacked a record of the sort of scholarship that would ordinarily merit such an appointment. The details of his early years at Chicago exhibit the same pattern of reward despite what would seem like insufficient achievement: according to Chicago Law School professor Douglas Baird, the man who recruited him, Obama was sought out by the law school because another law professor had said Obama had done a good job merely editing an article in his role as president of the Harvard Law Review. As a result, Obama was offered an office at Chicago and given carte blanche to write his book there, and then he was "persuaded" (Baird's phrase, not mine) -- despite Obama's own reluctance -- to teach law at Chicago, as though he were doing the school a big favor. As a law teacher he seems mostly to have been good at listening to "conversations" and making students feel heard.

Obama did nothing at Chicago but teach his courses, and did not produce even the minimal publication record usually expected and regularly required. He ran for and was elected to the Illinois state senate and was pegged as a star going somewhere by President Emil Jones, who facilitated his climb by handing him legislation that other people had developed and allowing Obama to get unearned credit. And then Obama became a US senator, having done little of substance at the state level, and a US president having done little of substance at the US senate level -- except to look good, sound good, speak well, and impress people by looking good, sounding good, and speaking well.

There's no escaping the fact that Obama also combined the powerfully charismatic but essentially empty characteristics already listed with a racial background that appealed to many people who wanted to show their own open-mindedness, and to be part of making American history by voting for a black man for president.

And so Obama became president on the strength of all of the above. And then he received a Nobel Peace Prize for the same, after only a few months as president and seemingly on the strength of speeches and promise. It seemed as though, at least for the moment, the world concurred that he was a very special fellow.

So to be cold-bloodedly logical here: why wouldn't Obama believe his own hype? It's the message that he'd consistently and repeatedly been given. Imagine if the above story had been your life. Wouldn't you believe in the magical power of your words and your persona? It is a world most of us will never know, but it has been Obama's world for his entire adult life.

Now he's come up against something different: the actual world, and especially the world outside of elite law schools, the US and its sycophantic press, or even the leftists of Western Europe. It's the world of big bad guys such as Assad and Putin and quite a few others, who have different standards by which they judge a person's mettle.

Obama warns, draws red lines, and fires off what he refers to as "shots across the bow" without even seeming to understand (as Krauthammer points out) what the phrase really means. Obama's youthful speechwriters -- who know even less than he does -- write the words he speaks, and he approves them. On occasion he also ad-libs some words, too.

But those other guys laugh at his pretty words. They are immune to his magic, and to the persuasive power of certain other words: those of the journalists and pundits in our mainstream media. While Obama talks, certain foreign leaders make plans, and sometimes they even follow their plans through with action.