Journalists like to think of themselves as bold and fearless. In practice, they are often a timid bunch of rabbits -- as evidenced by their handling of Private Manning gender problem.

What you have been reading lately is not an Iowahawk satire -- it's regrettably real. Private Manning -- the Private Manning who leaked more than 700,000 military and State Department records to Wikileaks -- is reported to have "issued a statement that said Bradley Manning was a female who wanted to live as a woman named Chelsea." Or, to quote Manning's own press release:

As I transition into this next phase of my life, I want everyone to know the real me. I am Chelsea Manning. I am a female. Given the way that I feel, and have felt since childhood, I want to begin hormone therapy as soon as possible. ... I also request that, starting today, you refer to me by my new name and use the feminine pronoun (except in official mail to the confinement facility). ... Thank you, Chelsea E. Manning 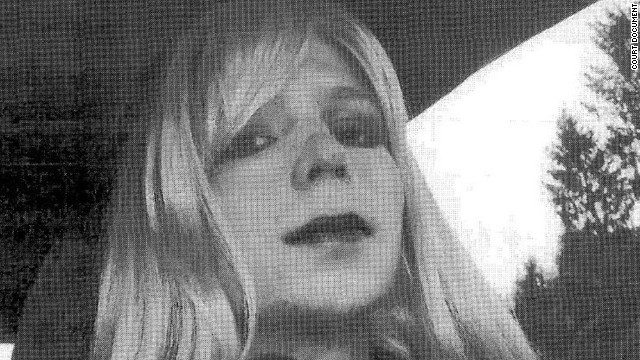 Manning actually reported this gender identity disorder to a supervisor, who never took any action and apparently didn't regard it as a security problem.  It thus appears that Manning is a tortured and twisted soul who deserves the seclusion of an asylum rather than a prison.

But I haven't yet come to the punch line of the story. With an uncharacteristic deference that the media rarely extends to its victims, many newspapers took Manning at his/her word and started calling him/her "she."

With a deftness that deserves some sort of Pulitzer, Reuters managed to completely avoid the use of any pronoun, thereby achieving neutrality.

But the rest took sides. At the latest count, Fox News,  The National Review,  The Washington Times,  Politico, CBS News, USA Today, The Washington Post,  and CNN, doggedly stuck to "he" while The New York Times,  The Associated Press, NPR,  The Chicago Tribune, and TIME, switched to an acquiescent "she."

This deference strikes an odd note. The press is not noted for old-world courtesy, as witnessed by their brazen invasions of privacy and hectoring of disaster victims. I suspect that it did not rise from Christian charity but from cowardice.  The comment from NPR's Stu Seidel gives us a clue:

In the past day, we have been challenged by listeners and readers and by colleagues at our member stations and in our newsroom, raising a chorus of views, including requests to rethink, backed up by arguments that make good sense. We have been persuaded. [italics mine]

Translated into plain English, they got their arm twisted. Manning apparently has the backing of the glibits*, as witnessed by statements from GLAAD and NLGJA. This is enough to make anyone think twice. The slightest hint of non-acceptance spurs GLBT activists to retaliation. They closed down a bar and a bakery in Portland for denials of service. As Houston's lesbian mayor recently put it, "This is a war we've already won. There are still battles left to fight. . . . mopping up operations." That threat is enough to scare any newspaper editor.

But this pronoun twisting is more than extremist nitpicking; it may be a legal masterstroke. Citing media acceptance as a precedent, Manning's attorney may appeal for release on the grounds that "she" is not that man Bradley who committed the security breach -- "she's" a different person now, a woman called Chelsea. And who knows, with the right kind of judge, "she" might get away with it.

This could be a major legal breakthrough. The controversy over same-sex marriage would become trivial. Two men could walk into a marriage bureau in any state and tell the clerk that one of them is really, deep down inside, a woman called Dolores who is the intended bride.

I suppose I shouldn't make a fuss about it. After all, it's hardly the first time the media has twisted language to appease a pressure group. What really should disturb us is that, despite an admirably honest admission to a supervisor, Manning was allowed to continue in a highly sensitive position, wherein misconduct could -- and did -- cause serious harm to our country.  How many more nutcases are in top security jobs where our fate is in their hands?

*  my pronunciation of the GLBT acronym favored by gay, lesbian, bisexual, and transsexual activist groups.