There is irrefutable evidence that the government of Syria has used chemical weapons to murder its own citizens. The wrapped corpses of children provide grisly testimony that President Bashar al-Assad, following the horrific precedent set by his father, will rank high among the most odious political murderers of the past century.

Such photographs trigger memories. During my boyhood years, before television, my visual images of World War II came with the weekly arrival of Life magazine, whose pages I eagerly turned to expand the narrow boundaries of Forest Hills, Queens. Life riveted my attention with battle photos from the D-Day invasion and the iconic raising of the American flag at Iwo Jima. Nor could I forget the sorrowful photograph of a Negro naval petty officer, with tears streaming down his face while he played "Goin' Home" on his accordion as Franklin D. Roosevelt's flag-draped casket left Warm Springs for Washington.

But by far the most stunning Life photographs arrived in the issue dated May 7, 1945, which also happened to be my ninth birthday. Its cover, above the caption "The German People," showed three grim-faced German men. I doubt that I read the description, in tiny print on an inside page, of their personification of "the bitterness of defeat." With "unhappy but hard and arrogant faces," an editor wrote, they had not yet "been forced to see the atrocities committed in their name." 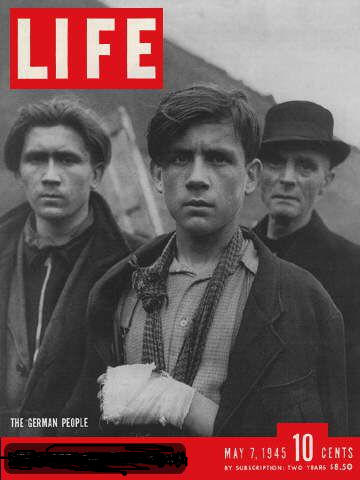 Turning the pages past photographs of victorious American and Russian soldiers celebrating V-E Day with warm handshakes and toasts, I was so stunned by what followed that I never forgot it. There, in horrific view, were the atrocities. A full-page photograph showed a young German boy as he "strolls down a road lined with dead bodies near a camp at Belsen." Corpses lined the tree-shaded path. Understandably, the boy looked away. I could not.

On the facing page were photographs of newly liberated Buchenwald prisoners in their barracks. In one, the haunted eyes of two survivors stared blankly at the camera from their triple-tiered bunks. Three others waved feebly. Three were too debilitated to even lift their heads. One smiled. In the adjacent photo, a feeble prisoner "deformed by malnutrition" leaned against his bunk, his emaciated legs barely enabling him to stand, his hollow eyes staring past the camera.

The final full-page photos in the six-page spread were horrific. American soldiers in Nordhausen walked past the bodies of 3,000 corpses, most in their bedraggled striped uniforms, awaiting burial. In Belsen, an SS officer and his female assistant (a "strong-armed German SS girl") lifted decaying bodies into a mass grave. At the top of the pile, a grotesquely emaciated naked man was sprawled on his back, his wide-open mouth framing what may have been his final scream.

Those images have remained with me for nearly seventy years. When I recently mentioned their enduring and disturbing power to my son, he promised to locate a copy of that issue of Life, overflowing with death, for me. When it arrived I was surprised to see the German civilians on the cover; that I had forgotten. But the photographic evidence of Nazi atrocities -- and hardly the worst of them (no ovens or gas chambers were shown) -- still stunned me in their horror. No wonder my shocked nine-year-old self had instinctively absorbed the ancient Biblical admonition: "Remember what Amalek did to you on your way out of Egypt" (Deut. 25:17-19).

But I did not remember, if I had even read at the time, the brief Life narrative entitled "Atrocities" that accompanied the photographs. Referring to skepticism about wartime reports of German bestiality, it cited the "irrefutable evidence" provided by "camps filled with political prisoners and slave laborers" of the "horrible" things that happened there. Jews, gas chambers, or "Holocaust" were not mentioned. Nor was Auschwitz, which had been liberated by Soviet troops several months earlier.

These were stunning omissions. It could not have been lack of information about the identity of the victims. By 1945 it was hardly a secret that the primary targets of Nazi extermination were Jews. But like the American government and the press (most conspicuously and persistently, The New York Times, which preferred to disguise the identity of Jews as "citizens of various European countries"), Life editors declined to identify Hitler's chosen victims. After all, as even Roosevelt's trusted Jewish adviser Samuel Rosenman had warned the president, to speak of atrocities against Jews would only increase hostility toward them.

My parents, who were avid Life readers, said nothing about the contents of the May 7th issue. I cannot remember when I first learned about the extermination of six million Jews. But I do recall that a childhood friend and I tested how long we could hold our breath to determine whether we might have survived the carbon monoxide and hydrogen cyanide used by the Nazis in their maniacal determination to annihilate the Jewish people.

Like so many Jews my age, I identified with the terrified nine-year-old Jewish boy, neatly dressed in his cap, shorts and knee socks, a knapsack on his back, a look of terror on his face, memorably photographed with his arms raised in surrender to Nazi soldiers as he exited from his Warsaw Ghetto bunker. He was who I might have been. His photograph remains in view from my desk chair.

Nearby is the issue of Life magazine dated May 7, 1945, with its haunting photographs that provided my first boyhood glimpse of the results of Hitler's relentless determination to annihilate my people. Sixty-eight years later I remain riveted by what I saw as a young boy and must always remember, especially when innocent children are brutally slaughtered by a maniacal dictator -- and an American president does everything possible to do nothing.

Jerold S. Auerbach is professor emeritus of history at Wellesley College. His newest book, Jewish State/Pariah Nation, will be published later this fall.