Warning: mysqli_free_result() expects parameter 1 to be mysqli_result, bool given in /var/www/html/americanthinker/admin/common/functions/func.general.php on line 126
 Keystone XL and Gas Prices - American Thinker
|

In the media wars surrounding the Keystone XL pipeline, there is an ongoing debate over whether its construction would raise gasoline prices.

Economist Jeff Rubin -- who published an extremely flawed book titled The End of Growth that myself and a colleague systematically debunked -- claimed the following:

"The proposed Keystone line would facilitate an ideal marriage between Texas refineries hungry for more supply and new Canadian oil in need of a home. A surplus of oil backing up at Cushing [Oklahoma] has turned into a sweet deal for Midwest refineries, and it's why West Texas Intermediate crude (WTI) traded for more than $20 a barrel lower than benchmark world oil prices for most of 2011. Without a new pipeline, Midwest refiners will get to keep paying a discounted price for Canadian oil. What exactly happens to that missing $20 a barrel? US motorists certainly don't get a break at the pumps. By and large, American drivers pay the same price no matter where in the country they live. No, the big winners are the oil companies that own the Midwest refineries; they've been pocketing huge profits on the back of abundant supplies from Canada."

This interpretation is not accurate. First off, gasoline prices vary substantially around the U.S. Today, there is a >20% difference in gasoline prices between the most and least expensive counties, with prices much lower across the south (except California) than in the north. In June 2012, the price differential was 33%.

As for the relationship between gas prices and the so-called Canadian discount, the U.S. Energy Information Administration (EIA) disagrees with the view that the discount is never passed along to the consumer in any form. In analyzing a February 2012 gas price map and the average gasoline prices in the Rocky Mountain region versus the American average between early 2010 and early 2012, the U.S. EIA made the following statements:

"In contrast to the eastern half of the United States, the gasoline market in the Rocky Mountain region is fairly self-sufficient. Refineries within the Rockies use crude oil produced within the region, the neighboring Midwest region, or imported from Canada. Over the past year, due to transportation constraints and increasing production, these crude oils have tended to sell at a discount to many other crude oils. Prior to 2011, refineries in the Rockies generally paid about $3 less per barrel for their crude oil than the average U.S. refinery. However, through the first 11 months of 2011 this difference grew to an average discount of $14 per barrel. In November 2011, the most recent month for which EIA has data, the gap was $16 per barrel. These lower crude oil costs have created generally lower-than-average retail gasoline prices in the Rockies for most of 2011... it is likely that crude oil in the Rockies compared to the rest of the country became even cheaper in January as spot prices for some Canadian crude oils and Bakken crude oil became more steeply discounted compared to many crudes used by U.S. refiners in other parts of the country... These recent price declines may have provided additional impetus for the sharp decline in Rocky Mountain gasoline prices."

The U.S. EIA analysis of these PAD District 4 (Rocky Mountain) Canadian oil discounts being passed on to consumers is consistent with the comparison of the 96 month average gasoline prices for the U.S., Wyoming (in PADD 4), and neighboring South Dakota (in PADD 2): 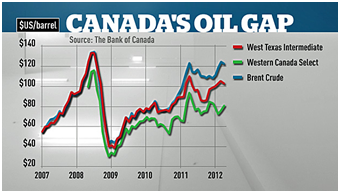 The full WCS discount relative to WTI/Brent may not be always passed along to U.S. gasoline purchasers in its entirety, but -- consistent with the U.S. EIA analysis (and in contrast to Rubin's claims, as well as those of Andrew Leach from the University of Alberta) -- there is strong evidence of at least some periodic regional gas price savings in the U.S. due to the WCS discount over the past few years. If the WCS discount is removed because of Keystone XL's construction, gas prices in some regions of the U.S. will likely be higher than would otherwise have been the case if the pipeline was not built.

Gas prices in Canada may rise as well, as evidenced by testimony from the Keystone XL proponent (TransCanada) in a Canadian National Energy Board hearing from 2009:

"Q: So, first of all, this 'strategy' as you call it, would be intended to raise the crude price not only in PADD II [U.S. Midwest] but also in Ontario; right?

[A:] Mr. Wise (representing TransCanada): 'Yes, it would raise it in Ontario and in Western Canada.'"

Philip Verleger, a well-known oil market economist, clearly agrees with my analysis. His view is that "US farmers who spent $12.4 billion on fuel in 2009 could see those costs rise to $15 billion or higher if the [Keystone XL] pipeline goes through, he projects. At least $500 million of the added cost 'would come from the Canadian market manipulation,' he wrote. 'Millions of Americans will spend 10 to 20 cents more per gallon for gasoline and diesel fuel as tribute to our 'friendly' neighbors to the north,' the highly respected Dr. Verleger wrote. 'The Keystone XL pipeline will move production from Canadian oil sands to a deepwater port from where it can be exported.'"

On the balance of evidence, gasoline costs are likely to increase in some regions due to Keystone XL.