Warning: mysqli_free_result() expects parameter 1 to be mysqli_result, bool given in /var/www/html/americanthinker/admin/common/functions/func.general.php on line 126
 Interview with an Al Shabaab Member - American Thinker
|

Interview with an Al Shabaab Member

Although Al Shabaab is the largest and most violent terrorist group in Somalia, there is relatively little known about this Al Qaeda group's day-to-day functioning. Formed in the chaos of Mogadishu in 2006 by the radical Islamic Courts in the capital city, Al Shabaab -- translated from Arabic as "The Youth" -- originally performed duties as enforcers and police for the court.

Since being forced out of Mogadishu into rural areas of Somalia in August, 2011, Al Shabaab now has the stated goal of forcing all foreigners out of the country. The group is noted for the violence it uses against enemies and has repeatedly carried out suicide attacks against any individual or entity it deems working against the neo-caliphate system Al Shabaab has as a vision for Somalia. The June 19th suicide bombing of the UN compound in Mogadishu that left more than 15 dead illustrates only too well how willing Al Shabaab is to kill in order  to accomplish its goals.

In order to put a human face to Al Shabaab, I arranged an interview with Ahmed, a 24 year old, self-described member of Al Shabaab, in the Sahafi Hotel in Mogadishu in late June. He arrived a few minutes late for our meeting dressed casually in western clothes.  Around his neck he wore the black shahada flag of Al Qaeda.

As noisy crowds of Somalis pushed by in the muddy streets outside the hotel, Ahmed told me his story in a sometimes trembling voice.

How long were you in Al Shabaab?

"I was in the group for three years - from 2006 to 2009" Ahmed states. His current involvement in the group, however, is not clear. But his wearing the flag of the group around his neck suggests he is still a member of Al Shabaab. And it is easy to discern by his shaking hands and the tremor in his voice that he is nervous to talk about the group, especially with a foreign stranger in the meeting room of a hotel in Mogadishu where several Somali government ministers live. 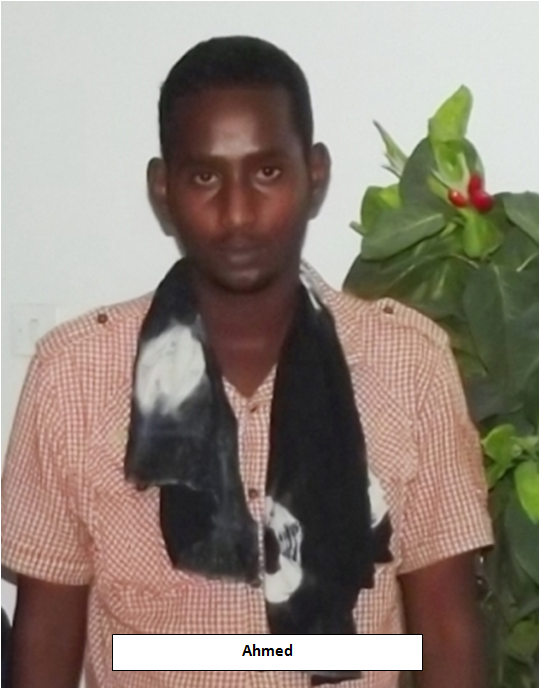 Why did you join Al Shabaab?

Ahmed audibly sighs, then leans forward in his chair, and rubs his right hand through his hair while looking at the floor. "I started with the group in 2006 when I was 17 and attending a mosque near 21 October Street in Mogadishu."  At that time he was a student in a madrassa and he was very devoted to the teachings of the Koran. Shootings were commonplace and clans frequently fought. With no real civil authorities, it was a very dangerous time in Mogadishu and people found safety only within their clan which were residents' only source of protection. "There was no government then in Mogadishu, we could only go to the Islamic Court with our problems" he says.  With no real contact with the world outside Mogadishu and entirely focused on the teachings of Islam, Ahmed's  days consisted of studying the Koran in the madrassa  and his nights on strengthening and maintaining close relationships with his family and clan.

Additionally, simple economics played a role in his joining the group. "There was no work in Mogadishu then" he says with a shrug. "No work, nothing to do all night in Mogadishu but to walk around the town but it was too unsafe to do that." At times his family had no food and he remembered being hungry when he went to sleep. Ahmed also alluded to friends of his being killed in fighting in the city, but offered no details. "The Islamic Court would give us no 'penalty' for what they (a rival clan) did to my friend" Ahmed said while looking straight ahead at the wall in front of him.

Who brought you into the group?

Ahmed was vague in answering this question.  He states the Islamic Court at some point began offering $70.00US per month to young men who would work for them. I asked him where the money came from and he answered "The court got it from Al Qaeda outside Somalia" with no other details.

He states it was at this point that he became aware of the existence of the group. "I heard then about Al Shabaab, 'The Young' I first heard it called. They said it was for us as young men to try and help Somalia and our clan." He joined the group in early 2006 with a small ceremony performed by the Islamic Court.

Where did you join Al Shabaab?

"In Mogadishu" he responded with no emotion.

What does Al Shabaab believe?

Here in the interview Ahmed's answer did not directly follow the question as given. Perhaps through bad translation or simply because he felt his points were more important, Ahmed instead listed three keys points which apparently form part of a formal code of conduct for Al Shabaab.

Ahmed moved his chair forward and smoothed the front of his shirt before answering.

"There are three things that are true:

One person in our group will kill all the others if you betray our clan-group. It is his job and he must do it.

Some Al Shabaab take money from Al Qaeda. This changes how we move.

Some Al Shabaab have loyalty to their family clans but some do not. This is it."

What does Al Shabaab want?

"Now things have changed since when I joined. At first we were an 'Arm of God', but not now I think. Al Shabaab now fights against each other and against others not from here. Now they fight for a title in the group, "I am commander" then, "No, I am commander".  People are killed for this and now it is different" he says.

Did you have any meetings?

How often did you have meetings?

"Sometimes once a week, sometimes less. We called each other if we needed to meet."

What did you do in the group?

"I was commander" Ahmed said with notable pride in his voice. I attempted to elicit specific examples of what specific tasks he performed in the three years he was in Al Shabaab, but Ahmed evaded answering the question.

Do you think the use of violence by Al Shabaab is necessary?

Ahmed sat still and looked pensive for 20-30 seconds  before answering this question.

"In the past I thought we were God's Arm, so yes then I thought to kill was right" he 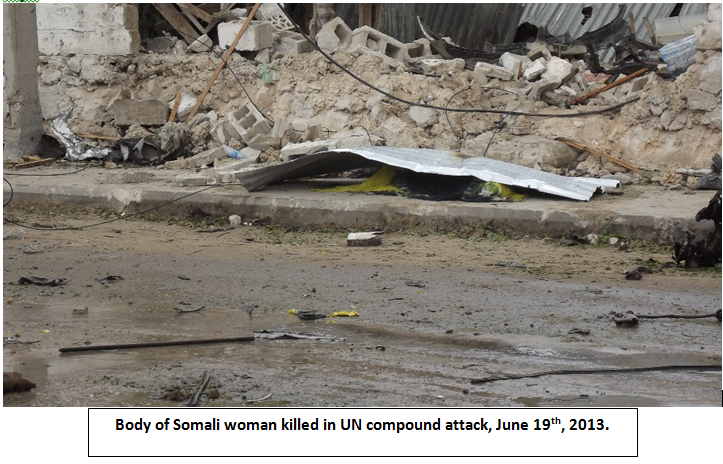 Are there different groups of Al Shabaab?

Ahmed states there are many groups. By all accounts Al Shabaab functioned, at least originally, as the enforcement arm of the Islamic Courts. Additionally, there is an undefined dynamic of clan identification associated with the groups, and Ahmed's answers suggest that part of the fighting between Al Shabaab groups are related to power struggles between family groups locally, regionally and apparently tribally. Family vendettas are seemingly incorporated into Al Shabaab group struggles for power.  He states clan identification is necessary for belonging to individual Al Shabaab groups, but it is difficult to understand exactly how this functions.

"Groups in Mogadishu, groups in Galguduud, groups in Baidoa. Many, clans, many families, many groups" he says with a shrug.

What do you call your leader?

"We call him Emir" Ahmed says, looking me straight in the eyes.

Are there any generals or captains?

There is some confusion as to the meanings of these words but by consulting an Arabic/ English dictionary he eventually states there are not.

"No, no generals, no captains. Only the Emir and commanders."

What is the name of the Al Shabaab group in Mogadishu?

Ahmed's answers again appear to stray from the question, but his responses never-the-less contain insights into Al Shabaab group cultural  identification patterns.  For this question, Ahmed wrote his responses on paper, and  Dr. Ali Mansouri (A'Sharqiyah University, Ibra, Oman) examined them. Ahmed wrote each word carefully so as not to be misread.

Each of the following responses were cited by consultant as being written in archaic styles referencing past judiciary/police  functions in the Caliph system. These responses were noted as having significance as they illustrate Al Shabaab self-identification with ancient societal roles in the Arabic past.

It is important to note that while Ahmed is Somali, the consultant is Iraqi.

Ahmed explained the roles of these positions as follows:

"We have three positions in Al Shabaab:

Each of these positions have a different job. We see each one doing his work as the Arm of God".

How does Al Shabaab view foreigners in Somalia?

"Al Shabaab wants no foreigners" Ahmed responded by making a cutting motion with his thumb extended across his throat.

"Al Shabaab wants no United Nations, no Americans, no one different living in Somalia." 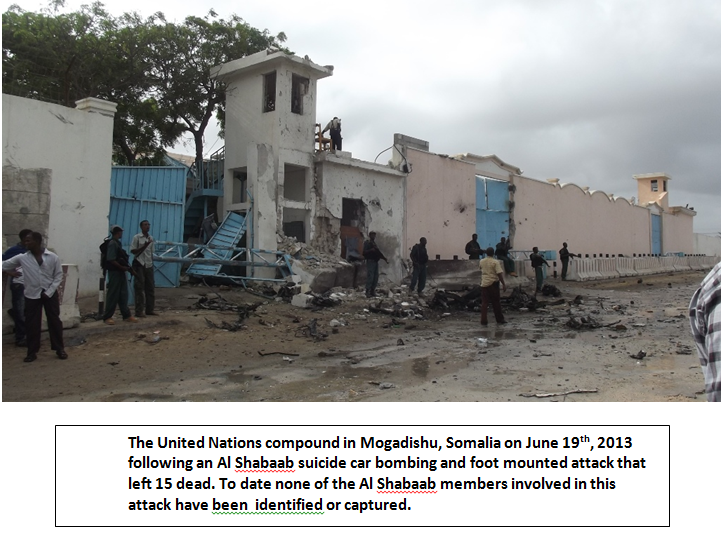 At this point in the interview, Ahmed's cell phone rings. With no explanation he leaves the room for several minutes. 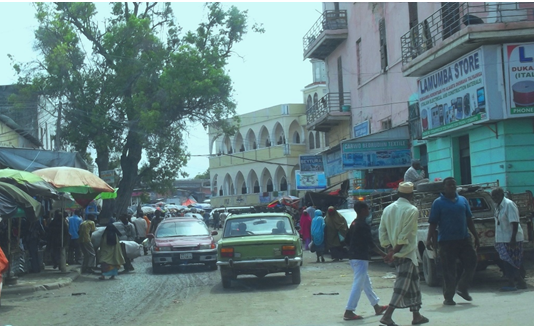 When he returns he simply states "I have to leave" and abruptly ends the meeting. Ahmed does not say goodbye when he leaves and we do not shake hands when he exits the room.  As he walks through the heavily guarded corridors outside of the hotel, Ahmed pulls his cell phone from his pocket and begins writing a text. Within seconds he disappears into the swirling mass of Somalis pushing by in the late afternoon rain.