Warning: mysqli_free_result() expects parameter 1 to be mysqli_result, bool given in /var/www/html/americanthinker/admin/common/functions/func.general.php on line 126
 How to Make Obamacare Obsolete - American Thinker
|

How to Make Obamacare Obsolete

Republicans are falling into the trap the Democrats have set for them.  By repeatedly voting to overturn Obamacare without proposing any effective alternative, House Republicans are allowing Democrats to brand them as "enemies of the poor."

The public does not like Obamacare but they do want healthcare reform, especially with regard to soaring costs. Previous Republican plans, though sensible, have addressed secondary matters such as tax breaks, administration and insurance and have not considered the fundamental issue of reducing costs by radically changing our antiquated healthcare processes.  By way of example, the following is a brief summary of a private analysis of some possible changes. 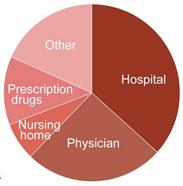 data from Centers for Medicare and Medicaid Services

As the above diagram shows, the major sources of healthcare costs are physicians' time, clinical tests, diagnostic procedures, hospitalization, and medication. Their costs can be drastically reduced by restructuring healthcare to take full advantage of modern technology. The following proposed innovations are examples of how this can be done:

(A)   replacing the "gatekeeper" physician with patient empowerment,

One of the obsolescent factors that have escalated healthcare costs is the role of the primary-care physician as a "gatekeeper" who assesses the patient's symptoms, performs or orders tests, prescribes treatments, and in some cases, transfers the patient to a specialist.  This cumbersome practice leads to unnecessary spending, often because of physicians' concerns about possible future accusations of malpractice.

The obvious remedy is to put the patient in charge of his own healthcare. Although some steps in this direction have already been taken, a complete transfer or responsibility would probably require legislative action to establish a patients' bill of rights, e.g.

The most valuable thing about a physician is his memory. As a result of training and experience, his brain contains a complex flow chart wherein the inputs of patient history, symptoms, and test results lead to a set of possible diagnoses which in turn lead to further tests and/or options for treatment. This "HSTDT flow chart" is the major part of a physician's expertise.

However, physicians are no longer the sole repositories of this knowledge. Such flow charts are now embodied in computer programs that, in a few seconds, can usually come to the same conclusions as the best of physicians -- and at a negligible cost. Programs of this type are already being used for teaching in medical schools and to assist physicians in office diagnoses.

Such programs should be directly accessible to any patient. His medical record would be at his disposal, either on a personal thumb drive or by encrypted access to a national database, linkable to any personal computer with a diagnosis program. The computer would then access the patient's medical record, accept inputs about symptoms and tests, process the data, optionally request additional tests, and then print out possible diagnoses and recommend medication, treatment, or a doctor's more detailed diagnosis. Alternatively, it might flag the patient's case as urgent and recommend an immediate visit to a doctor or hospital.

A suitable milieu would be walk-in clinics, such as those being tried at Walmart. In this manner, a nurse or intern could manage a dozen or more patients at once. Alternatively, some physicians' offices, or even hospitals, might include such low-cost high-throughput clinics.

This procedure would not eliminate the need for physicians but it would reserve their valuable time for the minority of cases where their personal skill and judgment are really needed.

Sole retention of a medical record by the patient is a possible but risky option. The possibilities for data loss or malicious tampering would necessitate some sort of certification and backup. The optimal method appears to be incorporation of all records into a national database with two levels of access:

Needless to say, in the light of (a) recent disclosures on NSA intrusions into private records and (b) recent hacking exploits, the greatest possible care would be necessary to secure identity-specific records from government spying or private exploitation. Therefore, for the sake of identity-squeamish patients, participation in such a national database would probably have to be voluntary, provided that some alternative method of medical record backup and updating is provided.

The use of clinical tests as an alternative and supplement to direct examination has become increasingly valuable over the past fifty years. Moreover, recent developments in electronics and miniaturized automation have enabled the transformation of such tests from manual laboratory procedures, requiring hours of technician time, to OTC packets allowing virtually instantaneous performance by the patient himself. Two obvious instances are pregnancy and blood-glucose tests.

An example of how far such tests can go is the Luminex Respiratory Virus Panel, which, in a few hours, can test for the viruses that cause most respiratory infections, thereby eliminating the need for days of expensive cell-cultures. The development of such tests should encouraged by government grants and the resulting products made available to patients.

Excessive hospitalization charges -- often over $5,000 per day for non-critical patients -- are a major factor in healthcare cost escalation. Studies by Consumer Reports, the Readers' Digest,  and the O'Connor Report indicate that much of this is unjustifiable and is due to waste, inefficiency, excess bureaucracy, hyperanxiety about possible malpractice accusations, and the covering up of expenses due to errors.

A high percentage of hospital stays, e.g. for non-critical "observation" or recuperation, could be handled by family- or volunteer-staffed facilities.  For example, one might envision "medi-hostels" -- motel-like structures, adjacent to and directly accessible to hospitals, wherein low-risk patients could stay, tended by family and/or volunteers, monitored by rentable portable equipment, such as that now used in hospital rooms, and immediately communicable with the hospital emergency desk. A patient could probably be accommodated in such a hostel for less than a tenth of current hospital costs.

There is little doubt that pharmaceutical companies are milking the public; their posted profits are ample proof. By way of example, OTC ophthalmic drops sell for over a thousand times the cost of their raw materials.

However, there is some justification for the high cost of prescription drugs, not because of R&D costs or the high failure rate of new drugs, but rather because of the high cost of phase 3 clinical trials -- often tens to hundreds of millions of dollars. Ironically, despite such costs, these trials often fail to reveal side effects that ultimately cause promising drugs to be withdrawn.

We should therefore consider replacing phase 3 trials with post-phase-2 periods of at-risk no-cost public use, carefully monitored by the national database described in (C). These would serve the function of clinical trials by giving prompt early warning of adverse side effects and determining whether or not the new drugs are really substantial improvement over older cheaper generics. After safety and efficacy of a new medication have thus been established, the manufacturer would be allowed to distribute and sell the medication at a profit.

These proposals are examples of the improvements and savings that can be achieved by reinventing healthcare in the light of modern technology. Our existing system is a cumbersome dinosaur that is too antiquated to be patched up; it must be entirely rebuilt.

By insisting that Obamacare will solve all our healthcare problems, Democrats have rejected reforms like those proposed here. Republicans thus have a chance to seize the initiative and appear to the public as the true healthcare reformers.

The 175 members of the House Republican Study Committee have proposed an approach relying on tax breaks for families who purchase their own coverage. Some perceptive reforms were also proposed by John McCain, and a few Republican representatives such as Kevin Brady.

A more detailed report is available to qualified legislative and healthcare specialists by  requests made here.

The variability and imperfection of the mental flow-charts inside physicians' heads has been brilliantly analyzed in Jerome Groopman's  How Doctors Think. A detailed proposal for patient-based decision making has been described by Thomas Goetz in The Decision Tree . I strongly recommend these books to anyone considering healthcare reform.

McCain made just such a proposal during his campaign: i.e. "Promote competition among providers by paying them only for quality and promote use of alternative providers (e.g., nurse practitioners) and treatment settings (e.g., walk-in clinics in retail outlets)"; see http://www.health08.org/sidebyside_results.cfm?c=3&c=5&c=11&c=16 .