He lies, denies, smears and defies America. He sticks his tongue out at our laws, our institutions, our traditions and our noble heritage. His one-man wrecking crew policies have spiked gas prices and government debt to unprecedented levels, and promise to destroy healthcare. Unemployment remains high, and has only declined due to discouraged workers leaving the labor force entirely. He undermines national defense with agreements that benefits our enemies at our expense, demands confiscatory taxes and illegally legislates through regulation and executive orders. He bans White House visits, then jets off on end-to-end exorbitant vacations.

He glorifies perversion while punishing morality. His foreign policies have caused the murder of American citizens overseas, which his own spokesman calls old news. His defense policies have caused the needless deaths of American servicemen - including the horrifying, inexcusable killing of the Extortion 17 SEAL team - while insuring that the conflicts for which they paid the ultimate sacrifice will be lost. His arrogant, revolting display of contemptuous, conceit is more obscene than a year's worth of Anthony Weiner tweets. He is presiding over the premeditated destruction of American society. 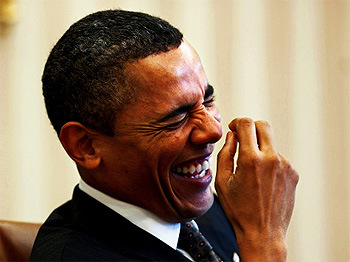 Yet now Obama wants -- nay insists -- that we follow him into Syria. Is he insane? Or maybe we should ask, has our entire DC establishment gone insane?

Congressmen and Senators from both sides of the aisle treat his infantile proposals as though they were the Ten Commandments being delivered by Moses himself. John McCain and Lindsay Graham demand our participation, while John Kerry with his characteristically affected elitist airs issued one gaffe after another. Even the Washington Post, normally a reliable PR outlet for Democrats, couldn't resist cataloging Kerry's endless display of stupidity:

House Speaker John Boehner might be forgiven for his stalwart support for the White House. Boehner has an excuse. As the Pink Floyd song says, "I don't know, I was really drunk at the time...."   Actually, we might be able to excuse a lot of them for the same reason. It is high time to revoke their lawmaking licenses, for it seems most of the U.S. Congress could be pulled over at any time, forced to take a field sobriety test and be cited for LUI -- Lawmaking Under the Influence.

How else could we explain their bizarre, surreal support for this President and his unerringly deleterious policies? Boehner may have been too busy downing shooters at Bullfeathers to have read it, but the Syrian opposition is much more likely to have used Sarin gas than the Syrian government. Ken Timmerman has been covering this story and revealed even more:

Shortly after the August 21 attack, the United States claimed it had "high confidence" that the Syrian regime was responsible for the slaughter. Reinforcing that view were YouTube videos posted by opposition sources showing fragments of rockets that were of a kind used only by Syrian government forces, not the rebels.

So now we're justifying American foreign policy with YouTube videos? When did we do that last time? Bueller? Bueller? Oh yes, Benghazi! More from Ken:

But intelligence reports from French and Jordanian military intelligence show that the jihadist al-Nusra front rebels acquired similar rockets and chemical agents earlier this year when they overran a chemical weapons depot in Aleppo on May 17 and captured a rocket unit in Daraa now long afterward, sources privy to the intelligence tell me.

Those intelligence reports concluded there was a strong likelihood the rebels had carried out the Aug. 21 chemical weapons attacks either deliberately or by accident.

Meanwhile recently released Belgian and Italian journalists taken hostage by Syrian repels are now claiming the rebels did it. Pierre Piccinin and Domenico Quirico say they overheard rebels explaining that they did it to trigger an American intervention. Quirico added that he was treated badly while in captivity and that the revolution had become "very dangerous."

And who may have finally pulled Obama's bacon out of the fire from this unbelievable display of ignorance, stupidity and careless negligence? Well, our old friend and former KGB chief, Russian President Vladimir Putin himself! Good old Vlad suggested the whole thing could be avoided if Syria turned over the chemical weapons it holds. Note that he doesn't even mention the rebels, who Russia claims launched the chem. weapon attack in the first place.

Now the Syria vote is on hold in Congress, as Obama "weighs" his "options" in Syria, claiming that, thanks to Putin, we now may have a "breakthrough" solution.

One must wonder what Obama gave away to our one of our greatest world rivals at the G-20 Summit in order to inspire Putin to put forth this "solution." He has virtually exhausted our bargaining chips.

God save us. When will Congress do its job and initiate impeachment proceedings?