Warning: mysqli_free_result() expects parameter 1 to be mysqli_result, bool given in /var/www/html/americanthinker/admin/common/functions/func.general.php on line 126
 A Third-Party Candidate on the Rise in 2016? - American Thinker
|

A Third-Party Candidate on the Rise in 2016?

There are many lessons to be found in studying the American presidential election record.

We're currently moving through a period of profound frustration with the Republican Party.  Many were looking and hoping for a Reagan-esque candidate to arise during the 2012 primary debates.  Alas, there wasn't one anywhere to be found.

But it hasn't always been this way, and -- if history is any guidance -- the tide will turn again, and soon.

Thus, from a historical perspective, the rise of both a significant non-top-two-party vote and a prominent third-party candidate is overdue. 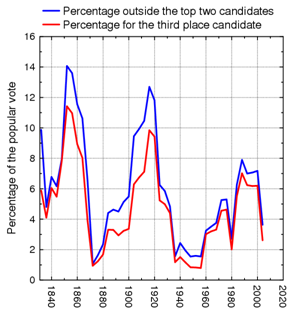 Keep in mind that the latest data point on this graph is 2004, which is the average of 1996 through 2012.  Consequently (and assuming that what is past is prologue), come 2016 -- or 2020 at the latest -- we should begin to see the share of the vote outside the top two parties rise again, and significantly so.  Also note that the amplitude of the non-top-two-party and third-party peaks are declining over time, suggesting a progressive consolidation of the two-party dominance.

The question remains: does the vote outside the top-two candidates matter?  Occasionally, the answer is yes.

We'll never know how Perot's voters would have gone had he not been in the race.  Exit polling data is unreliable on this front, since the campaign would have been different with Perot not in it -- making it effectively impossible to run a reliable counterfactual.  That said, given Perot's policies, it's reasonable to assume the large majority of his vote would have gone to Bush 41.  Perot almost certainly took a landslide victory away from Bush 41.

Some argue that Perot's exit polling data after the 1992 election showed that an equal share of Perot's voters (38% vs. 38%) would have voted for Bush and for Clinton had Perot not been in the race (the remaining 24% claim they wouldn't have voted at all if they couldn't have voted for Perot).  This seems like junk data.  Perot's running mate was United States Navy vice admiral James Stockdale, and Perot's political platform was based on reducing national debt and government bureaucracy and balancing the budget -- hardly liberal positions all around, and instead being more consistent with the current conservative Tea Party non-establishment platform.  It seems bizarre that Perot's voters would comprise a perfect liberal-conservative split.

We need to reflect on the implications of this election.  If Bush 41 had adopted fiscally responsible conservative policies that would have negated the need for Perot's entry, Bush 41 would have undoubtedly crushed Clinton, thereby ending Clinton's political career at the federal level, likely precluding his wife's future political successes, and possibly preventing an Obama 2012 victory (where voters were swayed by Clinton's campaign efforts on his behalf).  Post-1992 American political history would have been very different without Perot's 1992 election run.

Along comes 2000.  Bush 43 wins Florida's 25 electoral votes by only 0.01%.  The third-place candidate -- Ralph Nader of the Green Party -- takes 1.63% of Florida's popular vote.  It would be absurd to suggest that Ralph Nader and the Green Party had a dominantly conservative following.  Ergo, absent Nader in the race, Gore easily takes Florida and the 2000 election.

Third party candidates rarely rise up to significant levels because of voter dissatisfaction with both of the two major parties at any point in time.  Rather, they typically represent aggrieved voters from one of the major parties.  Analysts must keep this in mind when running counterfactuals, regardless of what dubious exit polling data tells them.

Again, we see that -- other than the period between 1920 and 1956 -- there are generally no more than three or four consecutive elections without a victory margin that could have been overcome either by the third party candidate on his/her own or via the combined vote of all non-top-two candidates.

Currently at three consecutive elections with no possibly determinative vote share outside the top two parties, we appear due for the rise of a potential electorally decisive third-party candidate (or, at least, non-top-two party vote share) in 2016 or 2020.  With the agitation in Tea Party circles and widespread displeasure at the GOP establishment's performance over the past few years, the pressure is clearly building in the conservative ranks.  For the Republican Party establishment to ignore this angst and assume that no serious third-party right-of-center candidate threat will develop in the next decade is to ignore history, and to do so at its own peril.