Warning: mysqli_free_result() expects parameter 1 to be mysqli_result, bool given in /var/www/html/americanthinker/admin/common/functions/func.general.php on line 126
 The Crusades Reconsidered - American Thinker
|

One of the idiocies passed off for decades among Western historians is bemoaning the Crusades as evil. The Islamic world -- the Ummah -- has disseminated this imaginary charge against the West, and like fools, we have absorbed Arab lies and taken the blame to heart. But the most superficial reading of Western history should put that canard to rest.

Shortly before he died in June 632 AD, Mohammed ordered Muslims to prepare to wage war against the Eastern Roman (Byzantine) Empire.

Upon his death, Mohammed's successor, Abu Bakr, planned to fulfill those instructions. Plans were also made to conquer Zoroastrian Sassanid Persia.

This vainglorious troop of bandits should have been easily dispatched,

However. Persia and Byzantine Rome had just come out of a savagely vicious war which ended in 628 AD. Emperor Heraclius had finally imposed the total defeat over Persia that had eluded the earlier Roman Republic and the Caesars -- but Byzantine Rome, though victorious, was severely mauled. Persia was reduced to a state of anarchy; and forced to pay indemnities to Constantinople.

The Persian and Eastern Roman empires were attacked almost simultaneously around 633 AD, while both were still licking their wounds. So frightening were the Islamic advances that these former blood enemies made a sadly futile alliance. By 644, Persia fell anyway.

By 634 AD, Byzantine Palestine and Syria were being attacked. The Battle of Yarmouk in August 636 AD would see Eastern Roman forces beaten. Emperor Heraclius, the victorious warrior, a mere 8 years earlier, would have to sneak out back to Constantinople in a boat.

Farewell, a long farewell to Syria, my fair province. Thou art an infidel's (enemy's) now. Peace be with you, O' Syria -- what a beautiful land you will be for the enemy hands -- Emperor Heraclius, after the defeat at Yarmouk.

Roman-held Jerusalem was besieged in November 636 AD, and surrendered by the following April.

By 674 AD, the Muslims had taken Egypt and much of Anatolian Turkey, and were besieging Constantinople. The Byzantine Romans, unlike the Persians, still had some fight left and managed to lift the siege using Greek fire, a fearsome weapon similar to a flamethrower.

In 711 AD, the Muslims invaded Spain, again taking advantage of weakness caused by internecine wars. It would be 781 years before Spain would be free. Among Islamic Andalusia's contributions to civilization were the demanded tribute of 100 white virgins every year to staff their harems. Every other contribution was plagiarized from other civilizations the Muslims had plundered.

By 732, the Muslims had advanced to central France, where they were finally repelled by Franks at the battle of Tours. Western Europe had been temporarily spared.

Sicily fell under Islamic rule for almost two centuries, until finally liberated by Norman Franks around 1091 AD.
According to tradition, Malta fell to Islam in 870 AD. Islam's contribution's to local culture was piracy. Malta became a staging point for predatory raids on Southern Europe.

After two centuries, Malta was finally retaken in 1091 AD.

Later on, historians would blame the Dark Ages on the Germanic Tribes, but the Goths and Vikings readily Christianized and embraced the higher civilization of the lands they conquered. The reality is that Islamic raiding is what produced the Dark Ages. Trade and the economy collapsed under the Muslim threat, plunging Europe into stagnation.

In 1095, after centuries of Muslim aggression, Pope Urban II finally had enough, and called Christians to war. He did so after the Byzantine Empire, now broken away from Roman Catholicism, appealed for fraternal help from the Western Christians to save them from Islam. After over 4 centuries of war with Islam, the Byzantines were on the verge of collapse. Most of Spain was still under Islamic tyranny. Malta and Sicily had only been recently freed. 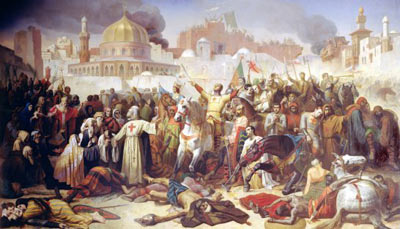 One may condemn the atrocities of the Crusaders, but what infuriates the objective student of history is that the far greater crimes of Islam are ignored.

The Crusades was Christendom finally fighting back, not always honorably, but against a foe which had plunged Europe into darkness for centuries.

Instead we allowed our students to be brainwashed, and force fed an Islamic line that we have to feel guilty. The Muslims invaded Southern Europe, yet somehow we Westerners are labeled the imperialists.

Islamic aggression did not end with the Crusades.

The reason Columbus headed West was because the Muslims had blocked all trade routes to the East. Yet, we are never told this.

Up until the 16th century, Italy was regularly invaded by Islam. Otranto was taken by the Turks in 1480, and held for only 10 months. Yet, it was time enough to behead over 800 Christians who refused to convert.

Piracy and kidnapping was so common that Catholic Churches in Southern Europe had donation boxes where the faithful could contribute to ransom hostages.

One could go on and on. The Islamic subjugation of Greece and the Balkans. The kidnapping of hundreds of thousands of Christian boys, over the centuries, to be forcibly converted to Islam, and compelled to serve in the Ottoman Army as Janissaries.

A half million or more slaves from the British Isles were kidnapped on the high seas by the religion of peace.
It was not until the U.S. Marines took on the Barbary Pirates and the French razed Algeria that Islamic predation finally stopped in the 19th century; but all of this is forgotten. Somehow, white Christians are the only villains now.

We hear the Muslims bewail about British imperialism; but the British do not want to go back to Egypt. The Muslim do want Andulasia back. We hear about French crimes in Algeria -- which were real -- but do we remember that Islamic predation that was the real agent which caused the Dark Ages. Europeans were in North Africa for only a century, but Islam pounded Europe for 1200 years. Yet, it is the Arabs who claim victim status.

But what do our politicians do, but apologize for the Crusades. Why?! Have the Muslims apologized for 1400 years of their crimes?!

Part of this idiocy stems from a hyper-liberal view of history which views European Christianity as inherently evil. It permeates the culture of academia; and refuses to see the real evil of Islam.

Sadly, a second cause is an ancillary residue of historiography which has a tradition of exaggerating the real crimes of Catholicism out of all proportion. The Spanish call this exaggeration the Black Legend of the Inquisition; and it results in a pseudo-acquittal of Islam, by blaming the Crusades on Catholicism.

Let us not forget either that it was Catholic France which saved the Christians of Lebanon in 1860 while the Protestant British were arming the Druze.

The time for apologizing to Islam must end.

Mike Konrad is the pen name of an American who is neither Jewish, Latin, nor Arab. He runs a website, http://latinarabia.com/, where he discusses the subculture of Arabs in Latin America. He wishes his Spanish were better.