Warning: mysqli_free_result() expects parameter 1 to be mysqli_result, bool given in /var/www/html/americanthinker/admin/common/functions/func.general.php on line 126
 No Evidence That ObamaCare Will Bring Down Health Care Costs - American Thinker
|

No Evidence That ObamaCare Will Bring Down Health Care Costs

As the liberal talking points on ObamaCare dictate, once ObamaCare is fully implemented, more people will contribute to the insurance pool and rates will stabilize and perhaps come down.

Sounds nice in theory, but does it work in practice?  Is this revealed as just a utopian fantasy not grounded in empirical evidence when we examine what has occurred in other nations?

The liberal premise for ObamaCare can be distilled into a couple of key hypotheses regarding health care costs: (1) health care costs are being driven up at rapid rates because of the high private-sector profit-driven component of the American health care system, and (2) increasing public-sector involvement in the health care system and government regulation will stabilize or decrease costs.

Multi-national health care expenditure data in the World Bank database begins in 1995, so that will be the datum for our studies. The following figure shows per capita health expenditures since 1995 in constant dollar purchasing power parity (PPP) terms for the USA, along with the Netherlands, Norway, the UK, Canada, and Australia -- as well as the OECD members average and the World Bank high-income non-OECD category. 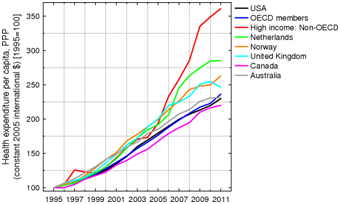 The USA has the second-lowest per-capita health expenditure cost increase rate among these countries/groups.  Since 1995, American per-capita health expenditures have risen 130% on a constant-dollar basis -- a substantial increase, no doubt, as I previously noted.  But this rate of increase is below the OECD average during the same timeframe (136%), well below the high-income non-OECD increase (261%), and also significantly lower than the increases seen in the socialized medicine/universal health care coverage domains of the Netherlands (185%), Norway (163%), and the U.K. (146%), and about equal to that of Australia (131%) and Canada (120%).  Sweden's increase has been 122%, Finland is at 126%, Belgium at 141%, Denmark and New Zealand at 144%, Spain at 155%, Luxembourg at 217%, and Ireland at 227%.

Committed ObamaCare proponents will counter that the increase in health care spending normalized to the economy has been higher since 1995 than these other nations.  Yes, that is true -- with the increases as a percentage of GDP equal for both the private and public sectors.  But the erroneous interpretation is that, when compared to nations with socialized medicine/universal health care coverage, American health care spending is increasing more rapidly.  As I showed above, this is not what is happening.

The take-home message is that the American problem with rising health care expenditures as a percentage of GDP is more a problem of economic underperformance than of unusually rapid health care cost trends.  The answer to bending this curve back down isn't ObamaCare (rather, that will likely make the problem worse -- either by further increasing costs or decreasing quality, or both); it is to take concrete measures to stimulate the private sector economy.  This includes less regulation and taxation -- which ObamaCare, by definition, fails to do.