Warning: mysqli_free_result() expects parameter 1 to be mysqli_result, bool given in /var/www/html/americanthinker/admin/common/functions/func.general.php on line 126
 Minimum Wage Laws are a Masterful Delusion - American Thinker
|

Government does not create wealth -- it merely taxes and consumes it. It may create 'government jobs' but it cannot create real wealth. Governments specialize in bureaucracy and welfare. Real wealth is created by real jobs profitably producing things of value in the marketplace. A real job is possible when an employer decides that their investment in a 'worker' is worth their risk, but alas, constant government interference greatly affects how risky this proposition is for them.

Market wage levels are not determined by emotions, greed or pity; the wage offered by an employer to a prospective employee is the result of certain constraints:

a. The skill-set of the employee and how it fits with the job requirements

b. The experience and record of reliability of the prospective employee

c. The actual value that the employee can potentially produce in the job

d. The quality and quantity of prospects competing for the same job

e. The wage level the prospective employee is willing to accept

g. The relative scarcity of skills and knowledge required to perform the job

Wage offers in the marketplace are bids; prospects with more valuable skills will receive higher bids for their labor by those who believe they can profit by employing them. Businesses that employ low-skilled workers typically operate within slim profit margins -- if these margins go too low, or run negative for very long, the business will likely cease to exist, putting all its employees out of their jobs. An unemployed 'worker' is then relegated to earning $0.00 per hour -- this is the true minimum wage.

An unprofitable business that operates in the red is actually consuming a net amount of wealth, rather than creating a net sum of wealth for the economy. To create a job, an employer must first decide that it is worth their risk to add an employee. When government issues edict to force employers to instantly pay their employees more, or threaten to add a myriad of arbitrary costs upon employers, this creates increased business risk, and often employers tend not to hire or even to lay off employees in order to remain competitive.

Moreover, in order to stay in business and remain competitive in a free marketplace, these mandated added costs to the business must be recouped. Sudden added wages represent real money which must be taken away from someone. Something must be sacrificed to pay for them. The business owners cannot wave a magic wand to create this money in the same way the government did to create its edicts. The federally mandated minimum wage is currently $7.25 per hour. 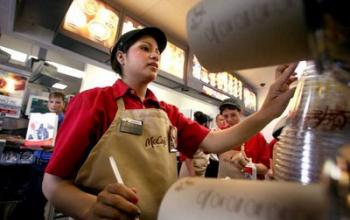 Let's examine a small fast-food business, Winston's Flame-Broiled Burgers; it has 20 workers whose average pay is $7.50 per hour. Because of the misnamed "Affordable Care Act" the average hours worked per week per employee has been lowered to 25 hours. Doing the math, the burger joint's monthly payroll is about $15,000 per month, while the monthly profit margin typically averages $10,000.

When the government comes along and mandate that Winston's must suddenly pay their employees $15 per hour, what happens? The payroll instantly doubles to $30,000. The business owners have some very difficult choices ahead if they want to stay in business -- from where is this windfall of money to the employees, an extra $15,000, going to come?

B) In order to stay in business, the management has no choice but to implement some combination of the following:

b. Lower the quality and/or quantity of its products - but doing this will make them less competitive leading to fewer sales. Lower revenue leads to lost profit.

c. Take away some workers' benefits (such as their healthcare premiums)

f. Lay off some workers -- for the ones who remain and rake in the windfall raise, woohoo! For the ones laid off, they are suddenly earning the minimum wage of $0.00 per hour (driving up unemployment)

g. Move the business to a free-market environment to remain competitive (all jobs are lost locally, more jobs are created elsewhere)

h. Go out of business -- some employers simply can't absorb all the mandates any longer and fold their businesses -- all employees lose their jobs (unemployment goes up)

C) The normal labor incentives are also turned on their head:

a. What incentive is there for a worker to improve their skills, to be responsible for taking the initiative to make their own labor more valuable in the marketplace, if raises come from the magic act of government edicts?

b. The employees who are not laid off as a consequence of the minimum wage may be happy, but what damage has this done for the careers of those who are newly unemployed?

c. And what good has come to those low-skilled prospects, typically the young and "the poor" whom the masterminds are supposedly protecting, who are then priced out of the market, or kept unemployed by hiring freezes, businesses that fold, or businesses that are too risky to start up in the first place?

d. For the young workplace entrant and the low-skilled worker whose skills do not produce anywhere near enough value in the marketplace, such as $15 per hour, from whom do they obtain entry-level positions -- the very positions in which they could have gained experience and learned to increase the market value of their labor?

e. What message of future economic incentives does this send to low-value workers when they expect to be magically rewarded with windfall pay increases through no effort of their own?

And some people seriously wonder why the unemployment and labor participation rates are so depressed now in the United States? Could the obvious resulting dearth of economic production, this void of wealth creation, have any connection with our limping economy?

Recently in Seattle, there have been mob protests from the "fast food workers community" demanding a raise to all their wages to the proclaimed "living wage" rate of $15 per hour. One such protest, with imported union activists and assorted progressives, screeched that any deficit in wages below the 'living wage' du jour was "Wage Theft" by their cruel employers, as they petulantly blocked city traffic while some were symbolically arrested.

And Seattle area masterminds actually take the progressive mob's demands seriously. BTW -- The government mandated minimum wage in Washington State is currently $9.19 per hour -- the highest rate in the country. The intersection of economics with politics continues to be an unholy one -- simply examine the founding of our country.

But as we continue to drift away from the foundations of our Constitutional Republic, magical edicts from government masterminds, who want nothing more than to "take care of" us, are just too mesmerizing to resist.

Fortunately for politicians, low-skill workers also tend to be low-information voters -- and hence, politicians will continue to prey upon them, ever impeding their economic progress whilst locking in their victimhood and votes.

The confluence of politics with economic tricks culminates in the age-old art of illusion -- always flashing the visible benefits of higher wages, appearing from thin air before the rabble -- all the while, the magicians' sleight of hand making invisible the loss of jobs, the prevention of jobs, and the destruction of incentives for the workers' self-improvement -- by forever conjuring the destructive illusion of "living wages" for the easily bedazzled.
By their masterful grand delusions, are we going to allow the masterminds to become our masters?