Part of the conservative appeal for the 2012 Republican vice-presidential nominee Congressman Paul Ryan (R-WI) was that he could "do math." He was a "numbers guy." Similarly, former Governor Jeb Bush is from Florida, and should understand very well its electoral demographics -- particularly since his brother George won the 2000 election by a bare margin due solely to what happened in the Sunshine State. These points make it all the more bizarre that both Ryan and Bush would support immigration reform. This type of legislation would sentence the GOP to near permanent electoral oblivion unless the party adopted very liberal positions to match up with the resulting illegal alien infused left-wing demographic shift.

Slate.com has published the following state-by-state map of the estimated American illegal immigrant population, based on data produced by the Pew Hispanic Center. While they are spread out across the nation, illegal immigrants are especially concentrated in Nevada, California, Texas, New Jersey, and Florida, where they accounted for an astonishingly high 7.2%, 6.8%, 6.7%, 6.2%, and 4.5% of these states' total populations in 2010. 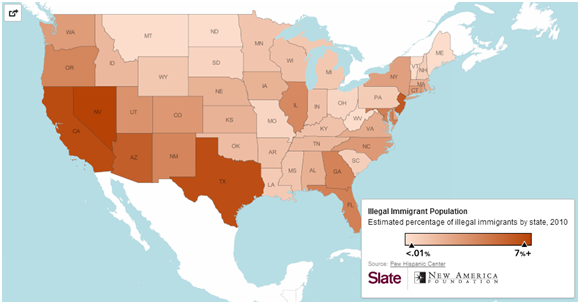 California and New Jersey are already Democratic strongholds. Texas is safely Republican (for now). Nevada and Florida remain battlegrounds, as do a number of other key states.

The post-1992 period is where we see the left-right split consistently tightening up in Florida. In 1996, Clinton (48%) only modestly fended off the Dole (42%)/Perot (9%) combination. As noted already, 2000 was essentially a Bush/Gore tie, with 2004, 2008, and 2012 also being close races. Bush would have lost the 2000 election if the illegal immigrants in Florida had been legalized at that time; and thus, he wouldn't have been contesting the 2004 election. It seems bizarre that Jeb Bush would now advocate for an immigration reform policy that would have denied his brother the presidency had it been enacted pre-2000.

As well, if we run the historical counterfactual, had Bush lost in 2000 due to hypothetical amnestied voters, whoever the Republicans would have likely nominated in his place would not have had the Bush-Florida connection, suggesting that a non-Bush ticket in 2004 coupled with the amnesty vote would have seen a Republican loss, leading to the counterfactual pre-2000 amnesty giving Florida to the Democrats for the entire period from 1996 to 2012. With 29 electoral college votes, promoting policies that put Florida consistently in the "D" column is politically suicidal.

It's a very dangerous electoral game the pro-amnesty group of Republicans is playing. Never mind the irrefutable objections to immigration reform based on fundamental rule of law principles, national security concerns, and economic arguments, this type of legislation can also be clearly shown to lead to potential electoral disasters for conservatives.