Warning: mysqli_free_result() expects parameter 1 to be mysqli_result, bool given in /var/www/html/americanthinker/admin/common/functions/func.general.php on line 126
 De-Politicizing the International Energy Agency - American Thinker
|

While the International Energy Agency (IEA) has some laudable goals, such as promoting energy security and economic development, it needs to be de-politicized away from environmental activism.  It also needs to improve the rigor in some of its reporting.  The IEA doesn't come cheap, however, with a 2012 budget of over $35 million funded by its 28 member-states -- including the USA.

Numbers of such magnitude are absurd, particularly in light of current levels of fundamental uncertainty regarding the existence, direction, and magnitude of anthropogenic climate change.  Global GDP is about $63 trillion.  Thus, the IEA expects us to pay about 5.5% of cumulative global GDP before 2020 and about 6% of cumulative global GDP before 2050 to deal with a problem that we collectively cannot define at high certainty?  By comparison, the world currently spends 6.1% of global GDP on public-sector health expenditures, 10.4% on total health expenditures (public + private sectors), 4.6% on public expenditures in education, 2.1% on public + private expenditures in research and development, and 2.6% on military expenditures.

The IEA claims such clean energy investments will be substantially, or even entirely, offset by fuel savings costs.  So the IEA can reliably predict fuel costs and relative contributions to global energy consumption across all energy sectors at high spatial and temporal resolution out to the mid-21st century in order to support such statements?  I thought not.  These IEA proposals are nonsensical econo-fantasizing and evidence that substantial reforms are required.

This institution has also recently waded into the fracking debate with a report entitled "Golden Rules for a Golden Age of Gas."  The report provides a nice case study regarding the IEA's need to avoid political topics, and to instead maintain a more objective and distanced perspective, as well as improve some of its reporting quality.  More specifically, while the IEA report offers a significant quantity of useful background information on unconventional gas, it suffers from two key flaws: (1) excessive precision in future production and economic estimates and (2) excessive deference to unfounded environmental concerns regarding the production of unconventional gas.

The first issue is all too common among resource modeling efforts; most computer modellers suffer from it.  However, many non-technical non-experts to a field may not realize the limitations of modeling economic and environmental variables into the future and, as such, may assume such future estimates to be reliable (particularly when obtained from a source such as the IEA).  A common inference from high precision is high accuracy, even though the two concepts are fundamentally unrelated.  Consequently, in future reporting, the IEA should substantially reduce the precision of its modelling predictions to bring them better in line with reality.  This will help the IEA avoid giving some non-experts the impression that the modelling results are more accurate than they actually are.

A couple of representative examples (of which there are -- unfortunately -- many to choose from) can illustrate the problems in the IEA report's predictions.  On page 99 of this report, the following figure is shown that presents predicted "[s]pending on net-imports of natural gas as a share of real GDP at market exchange rates by case" for the European Union, Japan, China, and the United States out to the year 2035. 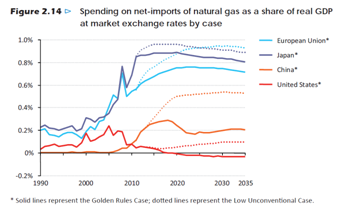 But if we look closely at this graph, we see China (under the Golden Rules Case) experiencing substantial variability between the late 2010s and early 2020s, with even a slight "blip" increase in the year 2025 that is out of place relative to the general trend between the early 2020s and early 2030s.  Is this single-year blip more than a decade in the future real?  How likely is it to occur?  We see similarly excessive precision in the predictions for the other regions.

How should this plot look?  Much "smoother," as there is a negligible chance of accurately predicting annual variability in "[s]pending on net-imports of natural gas as a share of real GDP at market exchange rates by case" out to the year 2035.  Furthermore, there should be error bounds on such predictions.  Models should be constructed to yield probability boundaries, and these should be shown on all IEA predictions.  Such boundaries, coupled with more realistically smoothed lines, would give readers a better indication as to the real limitations (and they are very real and very great) behind such predictive efforts.

Similarly, throughout the report we read statements such as the following from page 101:

In North America, both Mexico and Canada also have significant unconventional gas resources and Canada is one of only a handful of countries outside the United States where commercial production is underway. Which way the regulatory debate turns could have a substantial effect on future unconventional supply: in the Golden Rules Case, total production from North America reaches 1 085 bcm in 2035, of which almost 70% is unconventional supply, whereas the equivalent figure in the Low Unconventional Case is only 780 bcm; this makes the difference between the region exporting to, or importing from, global gas markets.

The notion that we can predict North American total gas production to four significant figures in the year 2035 is nonsense.  Perhaps two significant figures is more reasonable (actually, one significant figure [e.g., 1,000 bcm vs. 2,000 bcm] is likely the limit of our predictive capacity).  As noted above, innumerable predictions for all regions examined contain this nonsensical level of precision.  If anyone could reliably predict future production rates in major regions at that level of accuracy more than two decades into the future, such an individual would not likely publish the results openly, but would instead go to Las Vegas and become very wealthy, very quickly.

But the major concern over this IEA report is that it gives undue deference to the largely unwarranted environmental (and to a lesser degree, socio-economic) concerns surrounding unconventional gas production.  Environmental activists, and even some regulatory bodies, have stirred up public hysteria over the potential risks from unconventional gas production (e.g., fracking).  One must reasonably wonder if these are make-work projects, whereby the same groups (including government bodies -- which benefit financially from excessive industry regulations) engaging in fear-mongering will benefit from the results of their sowing hysteria.

Instead of playing into these fears, the IEA's report should have either more critically and objectively defended the industry from these generally unwarranted concerns and associated regulations or remained silent on the subject.  That said, the IEA is a pseudo-governmental organization, and it is not surprising that it may advocate for greater regulation of an industry.  The premise of the IEA's report itself could also be reasonably challenged, as its assumptions may be inaccurate.  Unnecessarily excessive regulations (e.g., the "Golden Rules Case") could be sufficiently damaging to the industry as to result in lower production rates and economic benefits than the so-called "Low Unconventional Case" employed as the "Golden Rules'" foil.  In other words, perhaps the "Golden Rules Case" will end up being the "Low Unconventional Case" and vice versa (i.e., political correctness does not always result in maximized economic benefits).

The IEA also needs to be careful when making statements such as the following:

Natural gas is poised to enter a golden age, but this future hinges critically on the successful development of the world's vast unconventional gas resources. North American experience shows unconventional gas -- notably shale gas -- can be exploited economically. Many countries are lining up to emulate this success. But some governments are hesitant, or even actively opposed. They are responding to public concerns that production might involve unacceptable environmental and social damage. This report, in the World Energy Outlook series, treats these aspirations and anxieties with equal seriousness. It features two new cases: a Golden Rules Case, in which the highest practicable standards are adopted, gaining industry a 'social licence to operate'; and its counterpart, in which the tide turns against unconventional gas as constraints prove too difficult to overcome.

It is also inappropriate for the IEA to treat "these aspirations and anxieties with equal seriousness."  Rather, the goal of the IEA's studies should be only to present the pure facts, and to determine the facts if they are not currently available.  Giving a forum to unwarranted anxieties opens the unconventional gas industry up to eco-blackmail, whereby many individuals and groups seize on the social sensitivity of an industry in a parasitic manner for personal gain but with no scientific support for their concerns or actions.

In Canada, we have seen the northern Alberta oil sands subjected to such eco-blackmail for a number of years (unfortunately, it was often successful).  Overall, the IEA's objective should be to dispel myths regarding unconventional gas production (whether the myths be for or against the industry) and present the cold, hard facts regarding this type of resource development and its opportunities and costs, rather than engaging in the politically correct -- as clearly evidenced by the unfortunate title of this report -- consensus-building efforts that the document is structured around.

Overall, the IEA needs to be de-politicized, to stick to objective and rigorous reporting, and to avoid eco-activism.  Conservatives need to police this organization more closely, as liberals will not -- particularly since the activist leanings of the IEA agree closely with liberal positions.