1he Muslim world is always ready to fragment, following the traditional Bedouin saying, "I against my brother, my brothers and I against my cousins, then my cousins and I against strangers". This is the war logic of the desert, and it appears everywhere in Muslim history. In Libya, NATO and the United States foolishly knocked over Gadaffi's tribal federation that ruled that country for decades, so that Libya today is back to civil war between tribes, families, terrorist gangs, and brothers. Most Muslim nations still preserve the primacy of brothers and cousins, because in case of trouble -- and there is always trouble -- brothers and cousins keep people alive.

When Obama pushed Hosni Mubarak out of power in Egypt in 2011 and promoted the Muslim Brotherhood instead, he imagined that there would be an "organic revolution," whatever that means. For Obama, who as an ideologue is always surprised by reality, "organic" means something like "authentic." Obama supports Muslims, as he has clearly said, because they are more "authentic" than the Egyptian Army, the basis for the 30-year Egypt-Israeli peace treaty. Mentally fixated leftists cannot imagine that the army can be an authentic institution. But General Anwar Sadat was the hero of the Egypt-Israel Peace Treaty, and was assassinated for it. General Hosni Mubarak kept the treaty going for three decades. General Al Sisi in Egypt today stands for modernism against the throwbacks of the Muslim Brotherhood, the ones Obama is still in love with.

In fact, in the Muslim world, armies have been the biggest modernizing force in Turkey, Egypt, Pakistan, Jordan, and Syria. A rational policy for the Muslim world would therefore strengthen armies, educate them, encourage modern thinking in science and technology, and turn them into centers for genuine progress, including political progress. 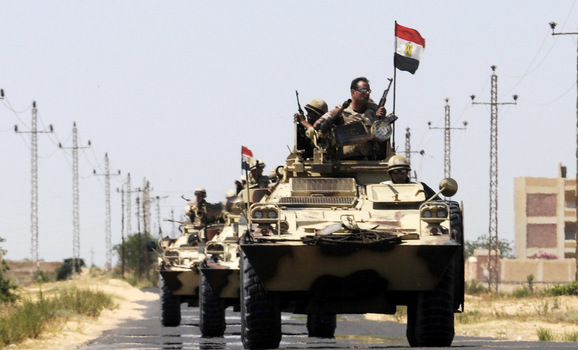 This is not so unusual. General de Gaulle in France stabilized the mad gyrations of French civilian governments in the 1960s. Chile's much-abused General Pinochet, for all his sins, also instituted the most successful free-market reforms in Latin America, turning Chile into a model of economic progress that Obama would do well to emulate. South Korea has a similar history, as do the Phillipines, Spain, and Indonesia. Armies encourage national identity, not local, family, tribal, and religious sectarianism.

Obama's ignorance and neglect of these elementary points have now caused the Muslim world to fissure along the oldest and most destructive lines: Religion, ethnic identity, tribalism, theological heresies.

The biggest split is between Sunnis and Shi'ites, people whose deadly warfare goes back 13 centuries.

The second emerging split is between theocracy and modernism.

For example, Syria and Iraq are breaking down along religious lines.

(This) is reminiscent of the February 22, 2006 bombing of the great golden-domed Shi'ite Askaria Mosque in Samarra, Iraq, by al-Qa'eda elements, under the command of Abu Musab al-Zarqawi. That carefully-calculated outrage is credited with igniting a savage multi-year civil war in Iraq, which, tragically, appears to be breaking out anew..."

Iran is the most militant Shi'ite power in centuries. Sunni nations like Saudi Arabia and Egypt are seeing their American defense umbrella crumbling, so that they are preparing to face, not tiny Israel, but the fast-growing threat of the Shi'ite Crescent.

In Turkey, the cautiously reactionary regime of Erdogan is promoting something called "neo-Ottomanism," a word that sends shivers up the backs of Balkan and Mediterranean nations that remember the sadistic and murderous reign of the Ottoman Turks.

The great divisions are between religious sects that have hated each other for 13 centuries. Liberals can't imagine that, because they think religion is dead. But Europe's political parties are still split by ancient religious differences going back to the Reformation. Just because liberal atheists cannot imagine religious war, religious warriors can still imagine atheists. Atheists deserve death by Shari'ah law, while Christians and Jews only deserve misery and oppression.

Equally important is the deep Muslim split between modernists and medieval reactionaries. Westerners may not see that, because modernist Muslims everywhere feel intimidated. They can be killed for expressing their beliefs. But think back to the Green Revolution in Iran which Obama ignored several years ago, and you may remember bare-armed young people on the streets of Iran, heroically demonstrating against the cruel and barbaric regime. Their bare arms in the heat of Tehran symbolized their rejection of the throwback regime of Khomeiniism.

In Egypt, Obama backed the reactionary Muslim Brotherhood, only to trigger a rebellion of modernist forces. Television presenters in Cairo burst into tears and angry rants when Morsi was overthrown. Their well-being and modern lifestyles depend upon knocking down the Muslim Brotherhood that Obama admires so much. They are right; they have seen the worst of Islamic reactionaries, and they do not want them.

Modernism comes up for every Muslim who can turn on the television or surf the web. It is spreading because science and technology are spreading, and secretly, it is undermining the Dark Ages of the Muslim priesthood. People named Mohammed are being indoctrinated in ancient madrassahs against the modern world, but they are also beginning to do first-rate science, and those two belief systems are not compatible. The modern world is now invading even the most medieval minds

Because of the suicidal stupidity of Western liberals, reactionary Muslims who oppress and kill women have been raised to power in Europe, America, and the Middle East. This is ignorant and suicidal, and ordinary people are finally beginning to understand the malignant perversity of their corrupt political elites.