Warning: mysqli_free_result() expects parameter 1 to be mysqli_result, bool given in /var/www/html/americanthinker/admin/common/functions/func.general.php on line 126
 Dangerous Times: Russia Rising in the Middle East - American Thinker
|

Now that America is leading from behind, more serious powers are rushing to fill the vacuum. Obama seems ready to let that happen, which is why India just launched its first homemade aircraft carrier and why Japan is rearming to keep China from stealing the whole South China Sea.

When America bugs out, what follows is not love and peace -- contrary to deeply delusional liberals. What happens is a worldwide scramble for king of the hill. Instability breeds war, as we can see in the news headlines. Obama knocked over the Mubarak regime in Egypt, a pillar of peace and stability for thirty years. Now civil war has erupted all over the place -- Egypt, Libya, and Syria. So much for the vaunted "Arab Spring." The Iranians are laughing their heads off, getting ready to sucker the West again.

And to show his profound concern for all the killing, Obama is sending vacation postcards from Martha's Vineyard, laughing and smiling and having fun. 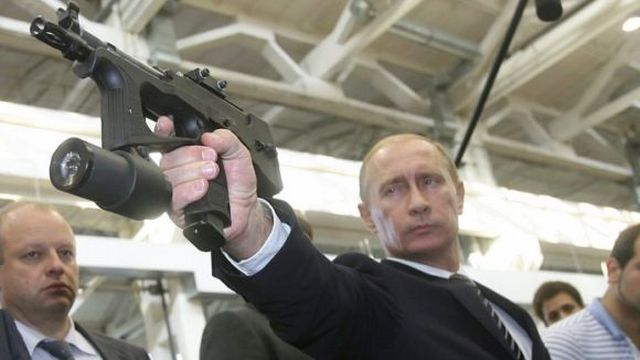 The Arabs aren't smiling. In Egypt, both sides blame Obama. In Libya and Syria, we have alienated both sides, too. Behind the scenes, the Saudis are paying for the Egyptian military to knock down the Muslim Brotherhood, while the oil sheikhs of Qatar are trying to shaft the Saudis.

Only Israel is democratic, stable, and prosperous, nervously watching while her enemies kill each other. Egypt is now at war with Hamas in Gaza, where the Muslim Brotherhood is hiding out. Hezbollah is entangled in Syria, defending the regime against Al Qaida rebels.

In the absence of American strength and reliability, all the players are turning to Russia, which is emerging:

● as a vocal defender of Christianity against Muslim persecution around the world;

● as a plausible peacemaker in the Middle East, with far better relationships with Israel, Saudi Arabia, Egypt, and Syria than America has today;

● as the monopoly natural gas supplier for Germany, with the consent of the Franco-German axis;

● as the only country with a credible a nuclear umbrella to protect its friends and deter its enemies;

● as a country that understands the value of relatively free markets -- witness the 14% flat tax Putin just introduced in Russia.

Vladimir Putin now looks like the heir of Peter the Great, the modernizing Tsar. This is another bizarre twist in history, but facts are facts.

Putin's Russia is not a Marxist imperialist power. That's important, because we are used to thinking about an expansionist Soviet Empire. Today, Putin has to be practical, to build up Russian strength after decades of imperial overreach and national decay. He is therefore using the Russian Orthodox Church as his ideological base, to build his own popularity. He is following in the footsteps of the Tsars. So far he is not moving aggressively, aiming instead for international prestige, economic gains, and influence in the near abroad. One reason is that he has a global competitor, China.

That doesn't mean Putin is a nice man, or that Russia isn't going to pursue greater power. Putin is a Great Russian ruler. China, Europe, and Islam are his biggest historical threats. But in the nuclear age there are threats all around.

Putin is therefore looking to take our place as the decisive power in the Middle East. He also wants to play a big role in the next OPEC, based on shale gas and oil. He also likes to poke us in the eye.

The biggest surprise is that in contrast to Obama, our most America-loathing president ever, Vladimir Putin is emerging as a defender of traditional Western values.

Is that weird enough for ya?

To show Russia's seriousness in the Middle East, Putin has paid personal visits and kept contacts with all the players, including the Sisi regime in Egypt, Israel, Syria's Assad, and Saudi Arabia. Everybody is now bidding for his support.

It makes good sense. Suppose you are Egypt's General Sisi, trying to run a nation in chaos. Who do you want to guarantee your safety? A self-loathing, treacherous Obama, or a ruthless but very consistent Putin?

The answer is clear enough.

This also applies to Israel, which doesn't want a war with Iran, but can't trust the crazies in Tehran. Only Russia has the will and the military clout to keep the mullahs in their place. America has the power, but not the will or the trust from its allies any more.

If Putin turns against the mullahs, they can't win. He is too dangerous, wielding a credible nuclear deterrent -- one he will use if Tehran ever poses a threat. The mullahs know what Putin did to Muslim Chechnya after the terror attacks in Moscow and Byelorussia. The Russian army is brutal and undiscriminating. They don't fear Western liberal hysteria. Obama may yearn to be adored, but Putin wants to be feared and respected. Putin is a man, with masculine values. Obama is not.

Our NATO 'allies" are now happy to buy Putin's real nuclear protection instead of a weak and vacillating America. This week the French and Russian air forces are holding joint exercises. It's not a coincidence.

In international politics serious powers prevail. Nobody will bet their survival on a tiny cult of delusional egotists in the White House. Guys like Putin will chew them up, spit them out, and ask for seconds.

During the Soviet Empire the rise of Russia would have been very bad news. Today it might give us a breathing space, to fix what is wrong at home.

We might start by introducing Putin's 14% flat tax, an idea that was made in America, but which our political class treats with sneering disdain.

If the flat tax works in Russia, watch for another glasnost and perestroika, but this time in America, as our own political ideas come back from abroad.