It is now fifty years since the Dream speech of Martin Luther King Jr. from the steps of the Lincoln memorial. One story you probably haven't heard about it is that of Charlton Heston and MLK.

It may shock the sensibilities of persons raised on particular American narratives to hear that Charlton Heston, the crazy NRA guy, put down his rifle and took his cold dead hands to the capital in August of '63 to hear at firsthand the sacred words we remember this week.

If history were to give us nothing but a copy of Dr. King's famous speech and a picture collage of the participants of that day, we would see an America of profound beauty. With the wide diversity of attendants and the loud call for this nation to live up to its fundamental declarations of equality and brotherhood, it would be easy to foresee the coming triumph of the American idea over the ignorant prejudices anthropomorphized in dogs and fire hoses of Bull Connor and his ilk.

If you were to give a copy of any current reflections of the events of that day to person pictured sitting in the shadow of the Washington Monument on August 28th 1963, they would be shocked to see what a future America looked like. It would be easy to believe that this republic would have a black president half a century forward, but that this bright historic event would be clouded by deeply divided and hostile America would be a more foreign concept to an attendant of King's speech than the button free, micro pocket-computers everyone in America 2013 would be speaking into. 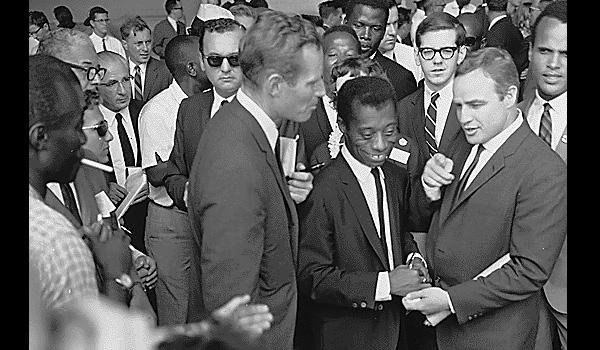 The late Charlton Heston, one of the famous attendants of '63 is a perfect example of just such a shocking future. In 1963, Mr. Heston was an ascending actor, still building on his his giant twin roles in Ben Hur (1959) and The Ten Commandments (1956). Pictured here that day, Heston would not only become a mega movie star over the next decade, but a famous and loud voice in support of the various Civil and Voting Rights legislations soon to come. In the decades hence, Mr. Heston morphed into a conservative poster boy, famously supporting both Nixon and Reagan, later becoming the undisputed face of the NRA. In America 2013, Heston is no longer a complex and nuanced actor who took very public stances in support of a wide variety of political movements, but is the old gun nut challenging Al Gore to come and take his dramatically upward thrust rifle. In this characterization we lose something fundamental, half a century hence, which pervaded that famous day on the capital mall -- in the long run we not only lose something of King but we also get the wrong America.

The resounding hallmark of Dr. King's speech, in modern speak, was equality. The dream sequence, the only part of his speech most people today recognize and recall, was nothing more than an expression of America at its most inspirational. It was not an equality limited to manifestations of voting procedures, or segregated lunch counters, colored water fountains, unequal schools or castelike seating arrangements on busses, but was an equality which existed before and above the founding of any one people. Not to diminish the actual abuses of bigotry in the south at that time, but the moral authority which gave fire to Dr. King's words that day was the muse of the Declaration, the God-bequeathed and thusly inalienable rights, comprising every man woman and child -- not resultant of their citizenship of America but their inheritance as humans.

It was not a country which was unified by Dr. King on the capital mall that day, as much as it was a fraternity of humanity forged around an undeniably fundamental understanding of the nature of simply being human. It was this fellowship which drew the likes of Charlton Heston to the mall that day. The current events of the South may have drawn his outrage, but the harkening to first principles led him to Washington to take his place among massive crowd. Among the diverse groups of people in attendance, despite many various proposed solutions among the crowd, these disparate peoples found unity not in the hope for legislation to abolish Jim Crow, but in the hope birthed by declaring the humanity of the Negro and granting him a place alongside the other groups already in the melting pot of our republic.

Since that day, the Civil Rights movement has been a hash of legislation, both soothingly good and at times painfully bad, which has tested our democratic institutions and our bonds as Americans. Heston himself would later condemn some portions of the Civil Rights Act he so famously lobbied for as going too far as to establish a system of reverse discrimination antithetical to the legacy of Dr. King. These pushbacks and reconsiderations of legislation long established is the process of self government messily playing out. The spirit of Dr. King purchases great space and grace in which flawed people can deal with the painful legacy of racial abuses in building a world of humanity bound above race and creed. But when the actual events of that day are recast into the language and politics of today, we get the wrong America, one that would be shockingly inconceivable to the crowd on the mall that hot summer of '63.

Today's articles reflecting of the events of that day tell us that defunding of ObamaCare would appall the ghost of the late great reverend. His call for not sliding pay scales downward should an employee happen to be black is today equated with demands from Congress to raise the minimum wage above ten dollars per hour. Opposition to gun control is bizarrely and dishonestly equated with subconscious desires to rearm Bull Connor and his deputies. None of this pays tribute to the human fraternity Dr. King spoke of, and all of it bastardizes his great words, endlessly sacrificing the work of a lifetime at the alter of the upcoming mid-term elections.

By shrouding the details of that day in the politics of today, we lose the details and the heart of the Civil Rights movement. In today's America, Charlton Heston contributed nothing but a Second Amendment defense and a few movies to American history. Dr. King was nothing but a pacifist who lobbied for whatever you wish he would have. In actuality, history tell us these were real men, who had much in common because of their shared inheritance as Americans. Heston was outraged that King was denied a concealed-carry permit by the State of Alabama in the years leading up to the speech. King condemned violence but by all accounts was a supporter of the Second Amendment who was denied that constitutional protection in addition to many others on the basis of his black ancestry. This is but one example in which the late reverend and Moses may have found common ground; but these, like any modern political squabble, were subservient and peripheral to the striving of both men to breath life into the foundational declarations of the nation they both loved. The simplistic characterizations of both men a half century hence obscure the event we remember this week. By concealing Charlton Heston, we deny Martin Luther King Jr. The lives of two great men are reduced -- by extension America is given the space to become the polarized and antagonistic people we are today. We may celebrate Dr. King this week, but alas we do his words on that day few favors.