Imagine you were the CEO of something called "American K-12 Public Schools" and it was the annual Board meeting. With everyone assembled, the firm's Chief of Research distributed this one-page "progress" report (Chart prepared by Andrew Coulson of the Cato Institute and derived from the US Department of Education "Digest of Educational Statistics," and NAEP tests, Long Term Trends, 17-year olds): 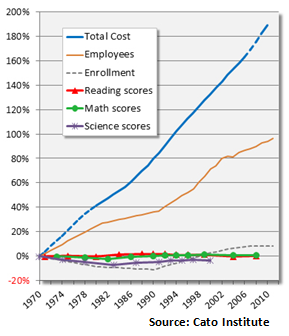 Clearly, if our hypothetical firm was a real business, it would have long vanished.

So, what is this Board to do? Heed President Obama's admonitions to "keep investing in the future"? Or, at the other extreme, follow Libertarian advice and privatize all education. What about banning unions and empowering parents? Or applying a newfangled electronic gizmo? Or, do we pump yet more money into educational research to finally discover the magic bullet miracle?

Sad to say, all (and much more) of these suggestions are, as the graph depicts, futile though "miracles" do occur, at least until examined more closely. We've "invested" hundreds of billion in our children for decades, and nothing helps (see here). Nor have the libertarian-minded reformers done much better with their free-enterprise charters and vouchers. That said, are we just doomed to spend more and more with little to show other than creating yet more jobs?

Let me now unravel this predicament though in a way sure to anger millions: American public education is probably performing as well as possible given the national talent and our craving for learning but we refuse to hear this upsetting news. Yes, room for improvement exists but optimism assumes that millions of today's indifferent students and their educationally apathetic parents are willing to make the extra, often painful effort. Lack of progress is largely irreversible and self-inflicted.

That there are limits to progress in anything, no matter how much money spent is widely accepted ...save in education. When it comes to schools, disingenuous public officials flatter the public by insisting that everyone can graduate college and enter the middle class. Why else use deceptive slogans like "No Child Left Behind" or "Race to the Top," both of which assume stellar academic performance regardless of ability or motivation? All delusional fantasy verging on fraud. Can you imagine that same officials demanding all youngsters to buckle down and train hard to be top-notch athletes?

Ironically, it is easy to expose this delusional thinking and save billions but few want to abandon make-believe. Here's the solution: use a baseline of what is possible academically for each and every student, a measure reflecting both native intellectual ability and motivation. These measures would indicate the maximum that could be accomplished under reasonably decent conditions. Every teacher knows this plain-to-see reality -get "C" students up to "B" but forget about them getting "A's."

A remarkable silence surrounds this eminently sensible approach. I have never seen it systematically applied to gauge educational progress. The only exception I've encountered comes from a retired engineer (Hugh McInnish) who studied some 25 elementary schools in Huntsville, AL. He simply took each school's Standard Achievement Test (SAT) and the Otis-Lennon School Ability Test (OLSAT) off the state's Department of Education Website (OLSAT basically reflects IQ). He then developed a measure called "Teaching Effectiveness" of achievement divided by ability multiplied by 100. What he discovered was that five of the six schools with the highest test scores were actually operating below their average cognitive potential while four of the six schools at the bottom were above their IQ-predicted performance levels. Hardly surprising given America's passion for uplifting the bottom while neglecting the smart.

An individual baseline approach will reflect how well each student performs given ability and motivation. Measurement can use IQ data (many IQ tests are culture free and thereby eliminate language and culture problems) while a motivation test could incorporate both student self-reporting and teacher ratings. National progress will now indicate how many youngsters are reaching their potential versus holding millions to unreachable standards.

More importantly, we can now identify those under-performing and thus shift limited resources to these students, a genuine investment in America's future (the impetus to cheat will also be lowered).

Needless to say, this approach is DOA for the simple reason that millions refuse to accept that their offspring cannot do superior work no matter how many millions are wasted on doomed-to-fail reforms.  It is also a job killer.

Imagine the reaction to the thousands of well-paid educators toiling to reduce the high school dropout rate if told that their mission is mission impossible? Further add the contractors waiting to build the latest Taj Mahal high school to uplift those who just barely survive 8th grade. Like turning lead into gold in the mediaeval times, today's squaring of educational circles is big business and those profiting from the futility will not quietly vanish. This will be a top-to-bottom economic catastrophe, everyone from well-paid foundation researchers to lowly paid classroom assistants.

And now for the giant elephant in the room: any measurement of unequal potential will, in all likelihood, display troubling group-related differences, a class one felony in today's egalitarian political climate. Moreover, better to utter the "N-word" or the "F-word" than say "IQ." Even conservative Republicans will denounce the results as "unfair."

Back to our board meeting and the CEO confronting the unpleasant news. Let me hazard a guess regarding the Board's response: all of this goes to prove we must try harder. Obama and his ilk now totally dominate educational thinking -- we have no choice but to invest in the future, and the future means everyone. Debt be damned, repeated failure be damned, we need yet more investing in pre-school, yet more nutritional programs for mothers-to-be and yet more Sesame-like programs to stimulate toddlers. Yes if we can split the atom and send a person to the moon, we can surely get everyone to be above average! Finally, at long last, we have a perpetual motion job-creation machine and its name is public K-12 education.