Warning: mysqli_free_result() expects parameter 1 to be mysqli_result, bool given in /var/www/html/americanthinker/admin/common/functions/func.general.php on line 126
 WHO's Delusions on North Korea's Health Care System - American Thinker
|

In 2010, the Director-General of the World Health Organization (WHO), Margaret Chan, praised North Korea's health-care system following her official visit to this totalitarian and rogue nuclear-armed police state. It is of note that Chan has been the Director-General of the WHO since 2006, and her term was recently renewed until the year 2017. The comments made by Chan regarding North Korea are sufficiently irresponsible and uninformed as to necessitate her immediate removal from the WHO.

Chan's remarks need to be considered in detail. As quoted in a disturbingly uncritical report on Chan's 2010 North Korea visit by Lisa Schlein of Voice of America (VOA) news, Chan stated that "there is no shortage of doctors and nurses in North Korea. She says the country does not suffer from a so-called brain drain because health professionals do not emigrate." Another source gives the following direct quote to Chan on this issue: "'To give you a couple of examples, DPRK has no lack of doctors and nurses, as we see in other developing countries, most of their doctors and nurse have migrated,' the director general of the World Health Organization said."

Why do health professionals not emigrate from North Korea? It is because this totalitarian state strictly controls all immigration and emigration, and prevents any undesired emigration by deadly force. For Chan to contextualize this policy in a favorable light regarding North Korea's apparent abundance of doctors and nurses is bizarre. One  imagines that the Berlin Wall also potentially maintained an artificially high level of health professionals in East Germany during the Cold War. Is Chan advocating that we wall in all societies and convert them to brutal tyrannies with truly horrific human rights records in order to prevent an international brain drain, particularly in the health sector?

Also from the VOA story, apparently "Dr. Chan says the [North Korean] government has done a good job in areas such as immunization coverage, effective implementation of maternal, newborn and child health interventions, in providing effective tuberculosis treatment and in successfully reducing malaria cases." Another quote of concern by Chan following her trip: "'Based on what I have seen, I can tell you they have something that most other developing countries would envy,' [the head of the UN's health agency] told journalists, despite reports of renewed famine in parts of the country." 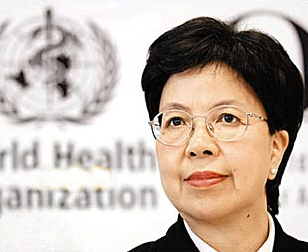 Chan's claim is simply not supported by official health statistics from the UN/WHO database for a variety of relevant health indicators that have North Korean data. It is important to note the absence of North Korean data for other UN/WHO health indicators not considered here (but which would likely not reflect well on the nation), as well as to stress the unreliability of any North Korean data examined herein given the inability of external agencies to reliably validate how accurate and representative the health information is. Such problems likely result in greater levels of inaccuracy (undoubtedly biased in favor of the North Korean regime) relative to other developing nations due to the closed nature of this society. Furthermore, not all developing/developed countries are included for several of the health indicators, and if complete global data was available, North Korea's relative public health care system rankings would decline even further.

What follows are available health statistics for North Korea (PRK) versus the United States (USA), and North Korea's relative ranking on each indicator:

We find that Chan's statements appear to be complete nonsense. North Korea's health care statistics are in no way something "that most other developing countries would envy." Also keep in mind that the latest year for which these statistics were derived was 2007, meaning that Chan should have been aware of exactly how poor North Korea's health system record was before, during, and after her visit. Even more embarrassing for Chan is a recent UN report that found "millions of North Korean children are not getting the food, medicine or healthcare they need to develop physically or mentally."

Nothing has changed in North Korea over the past couple years -- this nation has been a humanitarian disaster for a long time. Why didn't Chan mention these more realistic facts during and after her 2010 visit? Overall, sufficient evidence has been adduced to warrant western democracies formally calling for Chan's removal from the WHO, and for these same western democracies to take a far greater role in demanding substantial reforms to the WHO and its parent organization, the UN. If the WHO and UN refuse to hand reform authority of their respective organizations to leaders from more competent western democracies, the West should move to withdraw from both institutions and assume direct control over how its foreign health care assistance to developing nations is provided.