Warning: mysqli_free_result() expects parameter 1 to be mysqli_result, bool given in /var/www/html/americanthinker/admin/common/functions/func.general.php on line 126
 Which GDP Metric Should Conservatives Use? - American Thinker
|

Which GDP Metric Should Conservatives Use?

On May 11, 2013, Senator Ted Cruz (R-TX) delivered an outstanding commencement address at Hillsdale College. I cannot argue with Cruz's general remarks, which adhere to a solid commitment towards principled conservatism. However, one paragraph from this speech deserves some further discussion in terms of the narrative that the GOP wants to construct as it moves towards 2016 (which may include Cruz as a presidential candidate):

Which dataset you use for assessing the U.S. share of global GDP, and how you interpret it, is important from the conservative perspective. Cruz's politics are far closer to those of the Tea Party and Reaganesque conservatism than they are to the GOP establishment. Thus, those to the right of the Republican establishment should seek to use GDP metrics that support their views. The good news is that the available metrics are also more economically rigorous and defensible.

I will respectfully suggest to Senator Cruz that -- by saying the U.S. share of global GDP "has remained stable for two decades, despite growing competition from around the world" -- he is unwittingly playing into the hands of the liberals and the GOP establishment. If, despite the rapid rise of other nations, the U.S. share of global GDP has remained approximately constant since the early 1990s, why would voters feel the need to change the current U.S.economic direction? And doesn't this suggest the economic policies of the post-Reagan presidents were not overly problematic (perhaps even desirable)? In short, how does such data support Cruz's case for a more limited government with far fewer regulations and other restraints on the free market capitalist system? The answer is that the data Cruz chose to use was not optimal for his arguments, and hopefully -- in the future -- he (and other Republicans) will consider a move to the recommended dataset discussed below (which does support his proposals).

The following graph shows the U.S. share of global GDP using three different sources: (1) the December 2012 USDA Economic Research Service (ERS) International Macroeconomic Data Set (available since 1970 with projections out to 2018); (2) the World Bank indicator dataset for GDP in constant 2005 U.S. dollars (available between 1970 and 2011); and (3), the IMF share of global GDP on a purchasing power parity (PPP) basis from its April 2013 World Economic Outlook database (available since 1980 with projections out to 2018).For those not familiar with the purchasing power parity approach, the PPP "between two countries is the rate at which the currency of one country needs to be converted into that of a second country to ensure that a given amount of the first country's currency will purchase the same volume of goods and services in the second country as it does in the first." Despite its imperfections, the PPP approach is a superior means of comparing economic power between multiple nations having different currencies. 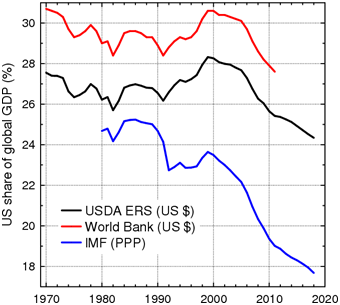 An obvious point is that the USA's GDP share can vary widely between methods, by as much as 9% of global GDP. Note the similarity in patterns over time for the USDA-ERS and World Bank U.S. dollar denominated series. This is because the USDA-ERS series is based upon the World Bank dataset, and involves other transformations.

All three series show sharp declines in the U.S. share of global GDP from 2000 onwards, comprising the entire terms of the Bush 43 and Obama administrations. Neither of these administrations were conservative (clearly the latter far less so than the former). During Clinton's term, the U.S. dollar denominated metrics show a sustained two-term increase in GDP share, whereas the PPP metric more accurately reflects a flat first-term and only a modest increase during the second term.

Bush 41's term (another non-conservative period) looks very different depending on the metric. The USDA-ERS and World Bank values suggest a steady-state situation, in contrast to the IMF's PPP method sharp decline from 1989 to 1992.

Coming to the Reagan years, we see modest GDP share increases under all three approaches.

These are critical points in what should be the conservative storyline moving through the upcoming primaries and general election of 2016. The American share of global GDP has been anything but constant since Reagan left office, as well as in the period before Reagan.

As the more rigorous PPP data clearly shows, the U.S. share of the world's economic output was declining in the decade before Reagan took office. Yet, despite high rates of growth during the 80s in China, India, and other nations in south and east Asia (recall the concerns over Japan potentially overtaking the U.S. as the largest economy?) and elsewhere, Reagan's economic model not only held the fort, but actually increased the American share of the global pie. Both Bush 41 and 43 dropped the conservative ball, and economic ball along with it. Obama is driving the U.S. economic ship rapidly towards an ever-dwindling global importance.

Reagan played up the 1970s decline during his 1980 election campaign. Witness his asking the electorate "[a]re you better off than you were four years ago?," while listing the economic failures of the Carter administration. By 1984, Reagan could declare that "[i]t's morning in America again." In the run-up to 2016, conservatives cannot be afraid to tell the economic story as it is -- a clear decline in the American share of global GDP that needs to be reversed (or, at the very least, halted). Indeed, the free world needs a strong USA, ideally back up at the global GDP shares of the 1980s. Some will say such a reversal or stabilization isn't possible, but those of us old enough to remember the late 1970s and the 1980 election campaign remember such claims, and also remember the Reagan administration proving the doubters wrong.