Warning: mysqli_free_result() expects parameter 1 to be mysqli_result, bool given in /var/www/html/americanthinker/admin/common/functions/func.general.php on line 126
 Trayvon, Rachel and White Privilege - American Thinker
|

Perhaps I'm just a creepy-a** cracka' who doesn't get it. But it always seems that when it comes to standards, the left gives you two for the price of one. And the idea that white people "can't" understand black folks -- a similar point to which was made in a recent article about the George Zimmerman trial -- is a good example.

But before getting to that particular piece, I have a question: is the issue here that one race simply cannot understand another?  Or is this really just restricted to white people? Are whites uniquely defective in this regard? To claim the latter seems an awfully bigoted position.

If this all sounds ridiculous, know that it is. But stupid theories deserve...well, you know.

Speaking of you know, the aforementioned article, "What White People Don't Understand About Rachel Jeantel," 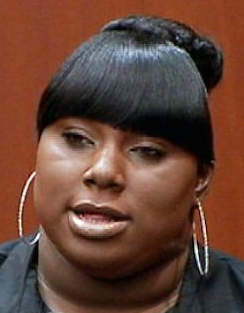 was penned by a white gal. In fact, author Rachel Samara is white enough for two people, and she writes:

It seems the middle-aged white men on both sides of this [Zimmerman] case are totally unaware of what Rachel's life is like - a 19-year-old high school student of Haitian descent who knows nothing more than the few block radius she has grown up in.

...She holds vital information that both the defense and prosecution need, but these middle-aged white men questioning her do not get it. Sadly both the prosecution and the defense (but more so the defense) have an extreme disconnect from her reality [which obviously includes heavy drinking, drug use, a vocabulary that is 25 percent expletives, and lying] ....

Now, this much reminds of the All in the Family episode in which two gun-wielding black home invaders enter the Bunker household. During a rather implausible exchange between the criminals and family members, the very liberal college student Michael "Meathead" Stivic gives a brief self-righteous speech explaining the criminals' actions and tells bigoted Archie (I'm paraphrasing), "You don't know what an under-privileged life in the inner-city can do to a man!" When one of the home invaders then soulfully asks Stivic, "And what do you know about it?" Meathead sheepishly responds, "Well, I learned about it in sociology class."

Of course, sociology has advanced much since the 1970s, and I'm sure Samara is on the cutting edge of that esteemed field. But not only does she have little idea of what the middle-aged men in question -- who have vastly more life experience than she does -- "get," there's something she doesn't get: the lawyers' job isn't to understand Rachel Jeantel; they aren't her therapist or minister. It isn't about her at all. It's about a man named George Zimmerman, whose life hangs in the balance. And the job of the defense is to find inconsistencies in a witness's testimony and discredit it if possible.

Of course, Jeantel has been wronged, but it wasn't by the white guys at the Zimmerman trial. It was by parents, a leftist government-school system and popular-culture effluent peddlers that ensured she'd become a quasi-illiterate, ignorant, shiftless guttersnipe.

Returning to "white privilege" and in fairness to Samara, she doesn't take the absolutist position that whites "can't" understand blacks; she simply says that most whites don't. And she may be correct. I've long observed that most people have trouble understanding mindsets radically different from their own; many people project and ascribe their own mentality to others. This is precisely why, mind you, Westerners often think that democracy suits all cultures in a one-size-fits-all fashion (Islam and "nation building," anyone?).

The reality, however, is that people run the gamut in discernment. Some understand others poorly, some very well, and many are in-between. But yet there are those who would deny that whites can understand blacks at all, and this is for a very insidious reason:

To shut down debate and silence opposition.

The idea is that since you are wholly incapable of understanding the matter, you have no business even rendering an opinion. And, for sure, your voice shouldn't be listened to.

But there's a very simple reason why I can understand blacks: they're human beings. And all people have certain things in common; we all need food, shelter, warmth, sleep, love, and Truth. We all share a basic human nature, even if the particulars of people's lives can cause that nature to become twisted in a variety of ways.

Another commonality is that we all need to conform to our society's just norms. So, no, it isn't our obligation to jump through hoops to understand Jeantel and her jive. We don't have to understand terrorists, either, except insofar as doing so will help us destroy them. And children don't have to be "understood" in the sense of kowtowing to their childishness. Rather, everyone needs to understand, accept and uphold the principles and obligations of good citizenship.

Lastly, there is the commonality of sin and sacrificing reputation. Lying is wrong no matter who does it, and repeated lies will discredit you -- even, believe it or not, if you don't happen to be a little white boy who cried wolf in a fairy tale.