Warning: mysqli_free_result() expects parameter 1 to be mysqli_result, bool given in /var/www/html/americanthinker/admin/common/functions/func.general.php on line 126
 The 'Greendex': Another useless eco-indicator? - American Thinker
|

The 'Greendex': Another useless eco-indicator?

National Geographic -- an organization that has gone off the rationality and rigorous science rails over the past two decades -- has developed what it calls the "Greendex," which apparently is "a comprehensive measure of consumer behavior in 65 areas relating to housing, transportation, food and consumer goods ... [ranking] average consumers in 17 countries."  The Economist magazine covered the Greendex, and did so in an entirely uncritical manner.  Thus, as with other eco-indicators such as the Happy Planet Index and the promotion of solar roads, we need to take a closer look.

The Economist, in its article entitled "Green, grow or guilt?," shows the following scatter plot of "feeling guilty about one's own environmental impact" versus the corresponding Greendex score by nation (i.e., how green you are -- the higher the better).  There is a high positive correlation.  In other words, nations that feel most guilty about their own environmental impact (e.g., China, India, Brazil, and Mexico) are the most environmentally friendly, whereas nations that feel least guilty about what they are doing to the planet (e.g., USA, Canada, Japan, and Australia) are the least eco-friendly. 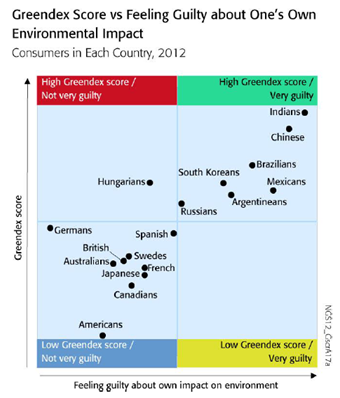 The only plausible reason someone would show such a plot with the guilty complex on the independent (i.e., "x") axis and the Greendex score on the dependent (i.e., "y") axis is to imply causation -- namely, that feeling guilty about your environmental impact leads to a lower impact.  We will come back to this point several times with different data, but the Greendex's own results suggest that such causative linkages are nonsense -- rendering the plot effectively meaningless.

The following graph shows the real causative relationship with the Greendex score, and it most certainly is not eco-guilt; it is individual wealth.  This plot shows per-capita GDP on a purchasing power parity (PPP) basis from the IMF database versus the corresponding Greendex score. 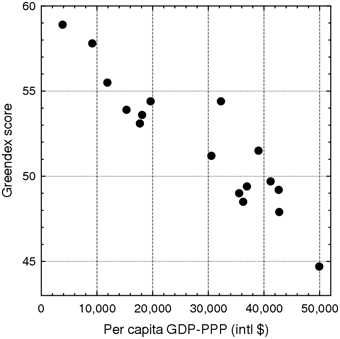 To quote Champ Kind from Anchorman: The Legend of Ron Burgundy fame, "whammy" -- the greenest nations aren't that way because of their overwhelming guilt about environmental impacts; it is because they are poor.  And if they ever get rich, they will undoubtedly have Greendex scores just like rich nations from the West.

On to the Greendex survey itself.  It involved polling 17,000 volunteer consumers online in 17 nations (i.e., 1,000 per country).  Readers familiar with rigorous statistical surveys will recognize the core problems immediately.  Voluntary online surveys are notoriously unrepresentative, yielding bias towards those who have ready access to the internet (a major limitation in developing nations) and the time and inclination to participate in such surveys, which very often correlates with biases in income, political preferences, and on and on.  On their face, web surveys should generally be ignored for public policymaking efforts.  Add to this some subjective questions, such as how guilty one feels (Is there an objective guilt index that we can calibrate everyone's true feelings against?), and such online polling data can result in a lot of unscientific gibberish.

The issue is far from trivial: urban residents have much different incomes and socio-economic/environmental attitudes and lifestyles from those of rural residents, especially in developing nations.  If your polling does not capture such dynamics, GIGO (garbage in, garbage out) seems to apply.

Many survey respondents clearly do not know where their electricity comes from, and/or we have further proof of highly non-representative sampling, as well as definitional issues.  Participants were asked whether their "household purchases 'green' electricity."  And what exactly is 'green' electricity?  Is it just from solar, wind, geothermal, and biomass?  Does it include hydroelectric and/or nuclear?  What about natural gas?  One can imagine widely differing definitions among respondents.  This is an entirely useless subjective question that yields meaningless data.  Brazil finished #1 for this indicator at 58%.  This value is not too far off, since Brazil gets 78% of its electricity from hydroelectric sources and 6.5% from other renewables (geothermal, solar, tides, wind, biomass, and biofuels).

India and China were ranked 5th and 6th for concern about climate change/global warming.  Yet their per-capita carbon dioxide emissions increased 46% and 114% over the past decade (compared to negligible changes in many Western countries).  But they are developing, you say, and we must give them a break.  No way.  China's per-capita CO2 emissions are already higher than France's and Sweden's, both of whom -- of course -- ranked much lower than China on this indicator.  Notably, China also ranked 5th when agreeing with this statement: "global warming will worsen my way of life within my own lifetime."  If residents of this nation are so concerned about climate change, why are their per-capita emissions skyrocketing and already well ahead of many industrialized nations'?

"Energy consumed in home heating is an important component of the Greendex," but "no allowances are made for consumer behavior that is determined by geography, climatic conditions where respondents live, culture, religion, or the relative availability of sustainable products."  Huh?  So residents of northern nations get penalized on the Greendex for living where it is cold part of the year, requiring a home heating system, and their southern counterparts obviously do not?  Any indicator that purports to rank ecologically responsible behavior while failing to explicitly account for geographical differences is nonsensical.  Emphasis is also placed on the purchase of locally produced foods, which is overly simplistic.  In a number of locations on marginal lands, importing food with low embedded energy costs from more naturally productive regions is more eco-friendly than trying to grow it locally.

Finally, we'll wrap up a point that I started on. Recall that Chinese survey respondents supposedly felt very guilty about their environmental impact?  The Greendex authors and the Economist seem to think this is causally related to the less ecologically damaging lifestyle they lead in China (a debatable point on its own, given China's eco-nightmares), whereas I argue it's because China is much poorer than the West, and if China gets richer, its Greendex will drop down to where ours is.

Oh, look.  India, China, and Brazil are ranked first through third for the percentage of consumers who believe that "owning a luxury car is a very important goal in my life" (at rates many-fold higher than those from the West).  China tops the list (48%) for those who believe that "owning a big house is a very important goal in my life," with India (38%) and Mexico (36%) not far behind.  Canada is at 11%, Japan at 13%, and the USA at 17%.  How do we reconcile these life ambitions with China, Mexico, Brazil, and India supposedly leading the way in the belief that "I am currently trying very hard to reduce my own negative impact on the environment"?  We cannot, which proves my point that the Greendex reflects relative current wealth among nations far more than the environmental ethics of their residents.

Sounds like the Greendex is revealing a hefty dose of eco-hypocrisy in some nations.

Sierra Rayne holds a Ph.D. in chemistry and writes regularly on environment, energy, and national security topics.  He can be found on Twitter at @rayne_sierra.