Warning: mysqli_free_result() expects parameter 1 to be mysqli_result, bool given in /var/www/html/americanthinker/admin/common/functions/func.general.php on line 126
 The End of the World and Other Entertainments - American Thinker
|

The End of the World and Other Entertainments

Folks have always been fascinated by the End of the World. Christianity addresses this little problem in Revelations, where we read about the Beast of the Apocalypse, the Four Horsemen of Apocalypse, the Whore of Babylon, the Seven Seals, and such. However, after those dread revelations, the faithful are assured of happier times.

But for those who believe that may all be myth, there is a host of other apocalypses thatlie in wait. These other endings for life on Earth can be grimmer than those found in religion, for there is little chance of happiness afterward. But, happily, they've inspired entire genres of popular entertainments in film, fiction, and even comic books. These genres have been lumped together with the term "post-apocalyptic."

Science says Earth will someday end when our Sun expands to become a red giant. Science fiction has responded to that eventuality with a bunch of stories about leaving the solar system before we're fried. My favorite of these is Arthur C. Clarke's 1986 novel The Songs of Distant Earth. Clarke wrote three treatments of this story, starting with a short story, and then a super-short movie synopsis, and then the novel. Songs was supposedly Clarke's personal favorite of his novels. Clarke's 1946 short story "Rescue Party" (anthologized here) also dealt with a dying Sun. It's also a terrific story, but Songs is more "realistic."

Any number of apocalypses could befall our species between now and the end of the Sun. Earth could again be hit by a killer asteroid. But films like Armageddon and Deep Impact aren't really post-apocalyptic; I'd lump them into the "apocalypse-averted" genre. For apocalypse to be averted, we need a hero who sacrifices himself for the continuation of the species, some noble guy like Robert Duvall or Bruce Willis. (One of my favorite Willis flicks is 12 Monkeys, which is, ta da, post-apocalyptic.)

Since the advent of the atom bomb in 1945, folks have come to realize that we ourselves could be the agent of our end, through nuclear war, nuclear winter, fallout. The post-nuclear-holocaust is a genre all to itself. Many are familiar with it from George Miller's Mad Max trilogy. The second of those films, Road Warrior (1981), begins with a marvelous narrated montage which distills what the post-nuclear-holocaust genre should be about. But often, as is the case with Miller's trilogy, the genre descends into biker gangs on the prowl for a "tank of juice," i.e. gasoline. Such films can be a lot of fun but can't be taken as serious treatments on life after the end of civilization.

One thing that could cause a post-nuclear-holocaust scenario is electromagnetic pulse. With an EMP attack, America's cities are left standing, but our electric grid and all our electronics are fried, and we're knocked back into the early 19th Century. (An EMP attack is one of my pet fears, especially when I observe our dysfunctional government stewing over such vital matters as gay marriage.) In his 2009 novel One Second After, William R. Forstchen limns out an America hit by an EMP attack.

One of my favorite post-apocalyptic flicks is The Postman (1997), directed by Kevin Costner. It was adapted from the 1985 novel by David Brin. The novel is a good read and I recommend it, but I think the film improves on it with judicious cuts. Brin addresses the differences between his novel and the film in this excellent video in which he also dilates on the post-apocalyptic genre in general. (Another reason the film is more powerful than the novel is James Newton Howard's musical score. Howard also wrote another wonderful score for the apocalypse-averted film Signs.) 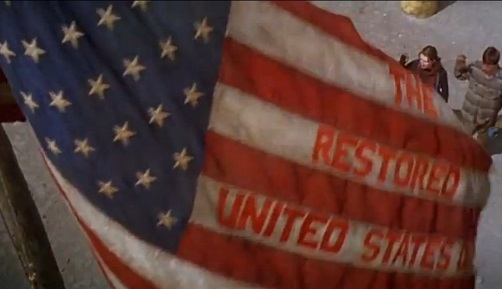 Costner, Howard, and screenwriter Brian Helgeland, put their own stamp on Brin's novel. To scrounge up a free meal, the title character, a drifter, travels about the American West passing himself off as a postman for the Restored United States. But his scam becomes real when folks believe him and form a postal service. His love interest (Olivia Williams) tells the Postman: "You give out hope like it was candy in your pocket."

The bad guy in Postman (played with relish by Will Patton) is General Bethlehem, a particularly nasty feudal warlord who despises the idea of a Restored United States and tries to destroy the newly-constituted post office and its beloved leader, the Postman. During their fight near the end of the flick, Bethlehem says to the Postman:

The Postman responds: "I believe in the United States." Costner's film is an unabashed love letter to America; it wears its heart on its sleeve. (Watch this terrific trailer.)

For the true post-apocalyptic to work, there needs to be survivors. With some scenarios, such as with The Postman, there's the possibility of rebuilding civilization (once you subdue the feudal warlords who've filled the power vacuum). Earth can also repair itself; the Postman tells survivors that the birds are migrating again and the rains are back. But in some post-apocalyptic yarns, survivors are doomed, Earth can no longer heal itself nor support life, it's just a matter of time before everyone is dead. This is the truly tragic post-apocalyptic scenario, because it means that survivors must ponder what once was and can no longer be. They've ruined everything, and must live out their remaining time in horror and shame. The champ of this variety of post-apocalyptic is surely Cormac McCarthy's 2006 novel The Road. The 2009 film adaptation was a noble effort, but it can't compare with the book, which, although unrelievedly grim, is quite spiritual. The Road is a cautionary tale, and may be McCarthy's most important novel.

A couple of recent movies posit the actual end of mankind -- and all in one fell swoop. So it wouldn't be right to call them post-apocalyptic; I'd say these two films fall into the "End of the World" genre. (A lad's got to keep his genres straight.) 4:44 Last Day on Earth (2011) is depressing (and earnest). But Seeking a Friend for the End of the World (2012) is basically a comedy, but with some poignant, tender moments thrown in. It's pretty damn witty, and was written and directed by Lorene Scafaria. The flick begins with this radio message:

Once again, if you're just tuning in, the C.S.A. space shuttle Deliverance has been destroyed. The final mission to save mankind has failed. The seventy mile wide asteroid known commonly as Matilda is set to collide with Earth in exactly three weeks time, and we'll be bringing you up-to-the-minute coverage of our countdown to the 'End of Days', along with *all* your classic rock favorites. This is Q107.2.

What's interesting about the genuine End of the World genre, and the challenge it poses for the creative types who tackle it, is not only the question of how folks handle their own end when they know the moment of it, but how they handle the certain knowledge that everything is ending. Folks usually accept their own deaths with dignity. But the death of all humankind, the death of all we've suffered and worked for, the death of the future, it's a lot to expect folks to handle with aplomb. Yet, that's Man's future -- we're doomed.

Knowing that you're going to die at dawn is mentally clarifying, but knowing that everyone is going to die with you presents a larger problem for the writer. What do people do with their last moments? After her comedic turn, Ms. Scafaria provides a touching answer.

The End of the World isn't what it used to be, but then... what is?