Warning: mysqli_free_result() expects parameter 1 to be mysqli_result, bool given in /var/www/html/americanthinker/admin/common/functions/func.general.php on line 126
 The Campaign to 'Get' Mitch Daniels - American Thinker
|

The Campaign to 'Get' Mitch Daniels

It didn't take long. The academic Left and their mouthpieces in the mainstream media (MSM) are demanding that Mitch Daniels be ousted as the president of Purdue University. Daniels' "crime?" During his second term as the Republican governor of Indiana, Daniels sent e-mail messages recommending the late über-leftist Howard Zinn's book, A People's History of the United States, not be used as a textbook in schools and universities, that something be done to "clean up" university classes, and he wanted the program headed by a university professor who was a thorn in his side be defunded. Hence, the charge -- first made by the AP after obtaining Daniels' e-mail by a Freedom of Information Act request -- is that Daniels is against academic freedom.

There are at least four lessons in what appears to be a looming donnybrook in Indiana.

First, a brief biography of Mitch Daniels. Born in 1949, the Harley-Davidson riding Daniels graduated from Princeton, and received a Juris Doctor degree from Georgetown University's law school after briefly attending law school at Indiana University. Daniels worked in the Reagan administration in the 1980s, was named president of the Hudson Institute, rose to top administrative positions in the Eli Lilly Company, and was Director of the Office of Management and Budget under George W. Bush from 2001 to 2003. He was elected governor of Indiana in 2005, and re-elected four years later. While he was governor, Daniels reduced the size of the state's workforce by 18%, cut and capped property taxes, balanced the state's budget, and, in his final year as governor, signed the state's new right-to-work bill.

When his second term as governor ended in January, 2013, Daniels was named president of Purdue University.

Prior to assuming the University's presidency, Daniels -- very much like Janet Napolitano -- had no experience in academe.

So, what are the four lessons in the Daniels' contretemps?

First, never put anything in an e-mail you don't want your worst enemy to see. This is a lesson that should have been learned ages ago, but for some reason, it escapes many -- who may (and I write "may") -- be motivated by arrogance.

Many of us write e-mails in haste and out of piqué. A good rule-of-thumb, in these cases, is leave the message unsent for 72 hours. Then, open the message and see if the passage of time and a cooling temper still recommend sending it. Even then, remember that anything you send can and may be used against you. 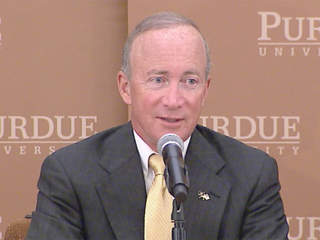 The second message is more important. Daniels' case illustrates vividly the likely headaches faced by a university president who comes to academe without a Ph.D. and little or no experience in higher education.

(I do not share this prejudice held many of my former colleagues in the academic "priesthood," as we used to call it. But the tendency to look with jaundiced eye upon "an outsider" exists, and should be taken into account by search firms and search committees when viewing a nontraditional candidate for a major administrative post.)

Someone taking a university presidency as a nontraditional appointee will live in the proverbial "fishbowl" until he/she demonstrates that he/she has strong academic values. An unshakeable commitment to academic freedom will be test #1.

If a committed leftist from outside academe were to become a top university administrator, and remain silent when a mob shouts down a conservative speaker, he/she will probably not be criticized.

Make no mistake; there are conservatives in the hallowed halls of academe. Look long enough and hard enough and you'll even encounter a Republican or two. Seldom three.

If you did encounter a klatch of Republicans on a university campus, they would probably be concentrated in Engineering and/or Business schools.

But, and here's the rub: probably because they are so badly outnumbered, and because Left-wingers in academe are so often "bully-boys" and "bully-girls," all too many academics on the Right are like homosexuals were a generation or two ago: "in the closet," quiet, and nervous. (I wish I could take credit for this imagery, but someone beat me to it.)

I would have a great deal more respect for many of those now calling for Daniels' head if they truly were unbiased believers in, and advocates for, academic freedom. Sadly, that's not the case, in too many instances.

Many of those who bemoan a Ward Churchill's fate -- he lost a tenured faculty position at the University of Colorado after, but not because of, referring to people who were murdered in the twin towers in New York City on 9/11 as "little Eichmanns," -- remain silent, or even take part, when conservatives such as David Horowitz are denied freedom of speech on university campuses. Some, many perhaps, but not all, of those calling for Daniels' ouster themselves root for speech codes on college campuses, which are often tools for silencing conservative voices.

To those now crying for Mitch to go, I say: "First, heal thyself."

The fourth lesson is that, as far as the Left -- whether in academe or the mainstream media -- is concerned, there is no statute of limitations for a Rightist's "guilt." Assuming Daniels sent those e-mails, and I have no reason to believe he didn't, they were sent while he was governor. None that I've seen or heard about, originated after he became Purdue's president.

Any time a Leftist is accused of a crime, or just plain stupidity, defenders will say something like "the voters have already processed that," or "that was a long time ago." What that's supposed to mean is that some sort of informal statute of limitations has expired, and so we should just "move on."

Remember when Obama's spokes-kid, a.k.a. Jay Carney, said that Americans should stop being concerned about the murder of four Americans in Libya last September because "that happened a long time ago"? At that point, only a few months had elapsed, but sufficient, I guess, for a Leftist like Carney to call for public amnesia.

If Obama and Hillary Clinton deserve public amnesia after just a few months, shouldn't Mitch Daniels be forgiven for something he may have done years before becoming a university president?