Warning: mysqli_free_result() expects parameter 1 to be mysqli_result, bool given in /var/www/html/americanthinker/admin/common/functions/func.general.php on line 126
 Gays at the Supreme Court: Somewhere Under the Radar - American Thinker
|

Gays at the Supreme Court: Somewhere Under the Radar

Last week I decided to observe the scene under the rainbow flags at the Supreme Court building.  As a Washingtonian, I had that dubious option.

But I had to resist the urge to stay away.  As a supporter of marriage, I wasn't in the mood to entertain more vitriol from a gauntlet of LGBT activists as was spewed at participants of the March for Marriage held in Washington three months ago.   Among that LGBT mob was a guy directing his "F--k you" stance to marriage supporters as he collected video of them on his cell. Also prominently on display was a mocking transgender pole dancer, clad in rainbow tutu and devil horns. 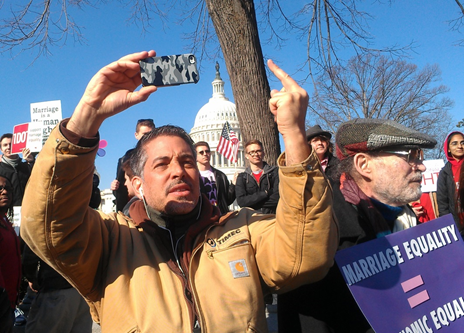 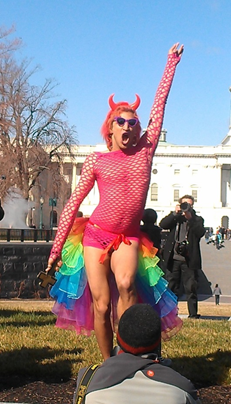 Their behavior epitomized the hostility of the LGBT counter-demonstrators at the event on March 26.  Their denigration of anyone who dares to speak of marriage as the union of male and female has served well to silence anyone who dissents from the LGBT party line.  Cass Sunstein, Obama's former regulatory czar, has prescribed such a chilling effect to suppress dissenting voices.

The smearing of pro-marriage people last March proved to be a part of a process intended to facilitate the Supreme Court's reversal of the Defense of Marriage Act.  Once opposition was effectively silenced, the other side was freer to create the illusion -- through a self-reinforcing cascade -- of  a public opinion shift that would allow the court comfortably to rest its case for un-defining of marriage.   For all practical purposes, the "gay" idea is to make heterosexuality the love that dare not speak its name.

Still, I went back to the Supreme Court building last week, despite my certainty that the court would rule as it did and reverse DOMA.  I guess I'm unduly influenced by Yogi Berra's adage that one can observe a lot just by watching.

The scene there convinced me yet again that the whole "fight" for same sex marriage was never a spontaneous movement, but calculated and manufactured and repetitiously hyped by the power elites of Hollywood, academia, the media.  It never had a real or popular core across-the-board, but depended entirely upon the suppression of dissent and real debate for its survival.

In the end, the ruling felt very predictable, which perhaps is why I perceived the reaction in front of the court to be less effusive and more artificial than I expected.

The first thing I observed was the invisibility of marriage supporters at the announcement.  There were no flags or any indicators of an organized opposition congregating anywhere.  All I could see was one of those typical religious "Repent or Perish" signs, no doubt welcomed by LGBT activists as an indication that those who don't agree with them are a tiny minority of religious extremists.

As a whole, the announcement did not even seem to bring out as many people as one might expect at such a turn of history in a city like Washington. The sidewalks in front of the court and across the street were full, due in no small part to the relentless mobilization efforts of the LGBT lobbies. 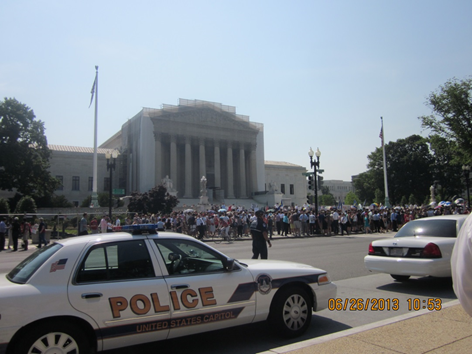 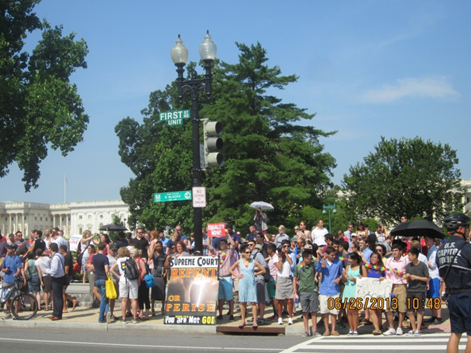 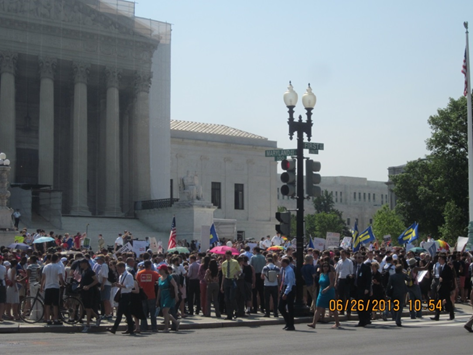 Manufactured "joy":  the strangely passive crowd in front of the Supreme Court on the day of the same sex marriage decision.

Sure, lots of folks at the ruling cheered when it was announced and when the plaintiffs came out of the building. Yeah, the Gay Men's Chorus of Washington sang The Star Spangled Banner afterwards.  But the cheers rang hollow and weren't sustained.  It was a bit like a sports event when the team that's well ahead scores again -- in a game everyone knows is fixed.  Not at all what might be expected when witnessing a momentous historical turning point.  (Or perhaps they rang hollow because at some primal level we are all in awe of the fact that five people with the stroke of a pen could call for a legal end to thousands of years of universal human history, establish that the guy in the rainbow tutu will suffer irretrievable harm if he can't get "marriage" benefits, and lay the groundwork for mandating that all states recognize same sex marriage--and ultimately for punishing anyone who disagrees with their diktat.)

The atmosphere was celebratory in a scripted sort of way.  I saw a young man and woman, running to each other with faux delight effusively exclaiming "NOW we can get married!  NOW we can get MARRIED!"  The implication was that they were mimicking Angelina Jolie and Brad Pitt with their designed-in-Hollywood pact to put off marriage until gays could marry.  A young guy stood with a sign "Free Hugs," inviting passers-by to oblige him.   A young lesbian couple reacted with mild approval when viewing the headline on a cell phone.

Two very young women (teens?) milled about side by side.  They looked just like sisters except that they were wife-and-wife and their sign said "Just Married."  An older women stood next to them with a sign that read "Proud Mom." 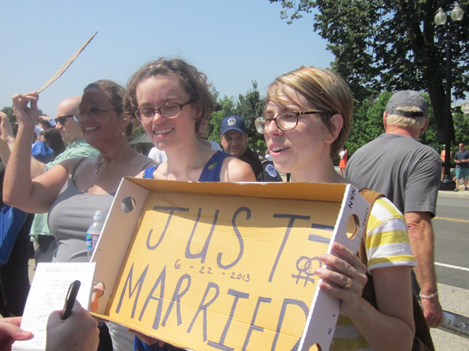 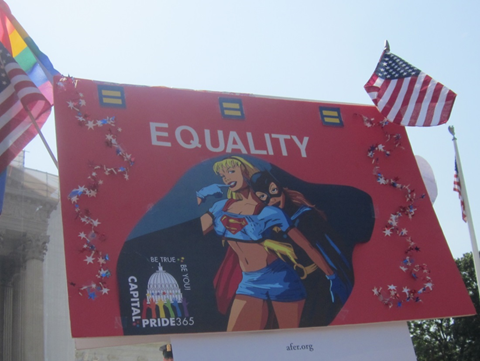 There is still more work to be done by the power elites pushing this agenda.  For starters, consider the "T" in LGBT.  Transgenderism is a big part of this package deal.  After demolishing DOMA, the Court can hardly have any ground for denying the "T"s a similar "victory." And when the ruling to "protect gender identity" comes down, presumably in the not-too-distant future, our supreme tribunal will have further declared dissent -- as well as the use of certain pronouns -- illegal.

Also consider the strong possibility that same sex marriage is not an end in itself, but merely a vehicle to abolish all state recognition of marriage. The court just produced the precedent to accomplish this.  Having removed marriage from its historical basis (children and family), "marriage" is nothing more than a relationship between any two (or more?) people for any reason at all.

A newly-recognized class of people -- singles -- will protest "singlism," which claims that all state-recognized marriage is arbitrary and discriminatory. They will make their case to the public and the courts.  They have already started. Yes, all civil marriage may soon be identified as "discrimination enshrined in law," to paraphrase President Obama.  Then, in the eyes of the state, family autonomy will dissolve.  The state will no longer practice any special restraint in dealing with those who are married (after all, they are not "special") or their families. We will all become atomized individuals, much easier to control.

In the end, the gathering at Wednesday's ruling quickly thinned out, no doubt getting back to all of this unfinished business-as-usual.  So much havoc to wreak.  So little time.

Irony will continue to come over the rainbow. And somewhere under the radar.