Warning: mysqli_free_result() expects parameter 1 to be mysqli_result, bool given in /var/www/html/americanthinker/admin/common/functions/func.general.php on line 126
 Can't New York Do Better? - American Thinker
|

New York is a remarkable state, and New York City is simply one of the greatest cities in the world.  The food, the theaters, the buildings, the businesses, the many cultures represented are all extraordinary.  It is a city of excellence.  It is no wonder New York City is the nation's most populated city, with over eight million people.  The state's entire population reaches almost 20 million.

It is because of these facts that the entire nation reads with disbelief the news of Anthony Weiner taking the lead in some polls on his run to be mayor of New York City.

It is not really surprising that Weiner is running; we know for a fact that he has no shame.  But 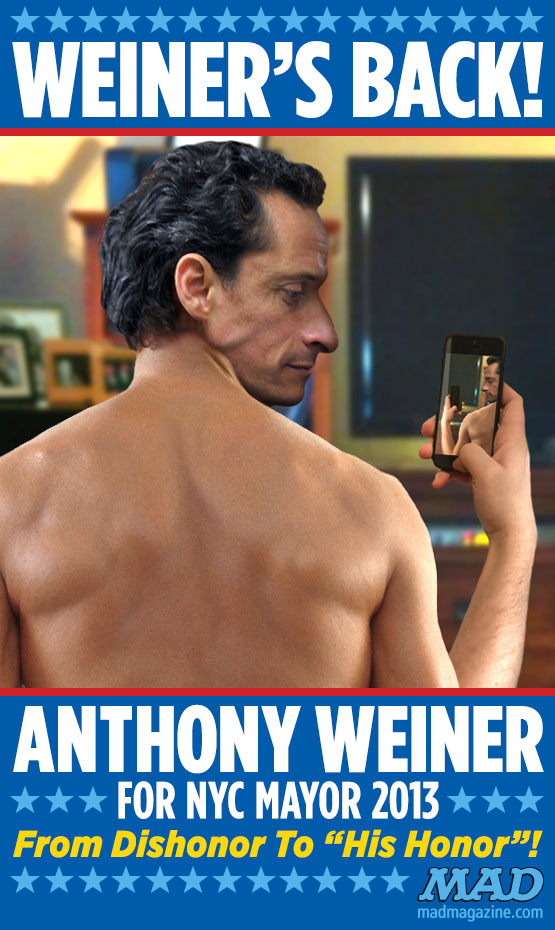 for so many to find him an acceptable candidate is really appalling.  Is that really the best New York City has to offer?  Weiner?  Really?  Out of the eight million-plus who live there?

I know the media loves to make fun, especially with the double entendres they can use for headlines in this story, but this is a serious subject -- especially now that he has the gall to run for public office again.

Mr. Weiner sent sexually explicit, pornographic pictures of himself via Twitter to a 21-year-old Seattle college student.  He was 48 and married at the time.  Later, Weiner would admit to sending similar pictures to other women both before and after he was married.  The feat would later land him a prominent spot in New York's Museum of Sex.  Even today he admits that there might be some more inappropriate pictures out there that may surface at any moment.

As if this morally reprehensible behavior and its many implications were not bad enough, Weiner decided to lie about the whole incident in the days after the story broke.  But he didn't simply lie; he acted with contempt toward those who tried to get answers on the topic. 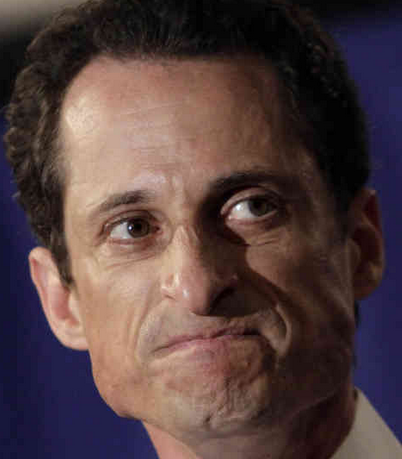 How can anyone forget his interview at the Capitol, where he called a reporter a "jacka**" for asking him about the incident?  That was three days after the news broke, and he was still carrying out his façade -- not only refusing to answer questions, but making up a story about his account being "hacked."  It was a contemptuous deception, with much fanfare, including a jab at a justice of the Supreme Court (Clarence Thomas), whom he accused in this same interview of unethical behavior.

Almost two weeks later, Weiner confessed, and a week after that, he couldn't hold on anymore and finally resigned in shame.

This guy is not trustworthy, and everyone knows it.  Maybe some people are just cynical and believe that all politicians lie, so they might as well vote for Weiner and hope he lies and cheats to benefit the citizens of New York City.  However, if that is the case, then it's simply pathetic.  Such mentality is the product of lazy thinking and has no basis in fact.  There are plenty of good people of excellent character in New York City.  Not everyone needs to cheat and lie to get ahead.  There are people worth trusting.  Anthony Weiner is simply not one of them.

But the incredible headlines from the Big Apple do not stop there.  Apparently, former New York Gov. Eliot Spitzer, who also resigned in disgrace after his involvement with prostitutes was uncovered, has been inspired by Weiner's story and has decided to enter a race for public office after his shameful resignation in 2008.  The investigation of Spitzer at the time uncovered suspicious activity reported by the IRS, including the transfer of more than $10,000 to a front company for the prostitution ring.  There was a lot to the story.  So of all the races to consider, Spitzer has decided that New Yorkers should trust him with (drum roll, please): yes, their money.  He is running for city comptroller, the chief accountant and auditor of the city, among other things.  You can't make this up.

And, like an infomercial, "but wait, there's more."  It turns out that the person Spitzer will be running against is the old "madam" who supplied him with prostitutes.  Again, I am not making this up.  Kristin Davis, known as "the Manhattan Madam," is running as a libertarian candidate -- this after she was convicted of promoting prostitution in the 2008 investigation involving Spitzer, which landed her in prison for four months.

I know this is the sort of train wreck some people like to watch on reality shows, but please, New York City, this is real life.  None of these people belong in public office.  You can do better.  New York City deserves better.  And the rest of the country does, too.  You should demand of your elected officials the same excellence the city is known for in other areas.