The British Museum has recently assembled a sumptuous visual feast of an exhibit of the material culture of ancient Mesopotamia for the general public called Mesopotamia -- Inventing Our World. You can see it now at the Royal Ontario Museum in Toronto, Canada. The underlying theme of the exhibit is that Mesopotamia (the land in and around modern Iraq, including its desert and highland hinterlands) is where civilization as we know it today first began with all its historic firsts -- the rise of cities, urban living, city planning, royal palaces, temples (and ziggurats like the Tower of Babylon), writing, arithmetic, astronomy (and astrology) accounting, law, irrigation, politics, leadership, city states, kingdoms, and conquering empires each with its own pantheon of polytheistic gods and attendant spirits.

The exhibit features 150 objects from the time of ancient Sumer (3300 BC) to Babylon in the sixth century BC. These include early administrative tablets, cylinder seals, drinking cups, a headdress with gold leaves, a full statue of King Ashurnasirpal II, a tablet from the Epic of Gilgamesh (which mentions a universal flood), a tablet from the Enuma Elish which describes the creation of the world and a tablet that records Nebuchadnezzar's success (605-652 BC). The artifacts are presented in four areas, one which introduces Mesopotamia and then in chronological order according to the rise of the city states and empires, the first being Sumer, the second being Assyria and the third being Babylon (although they rose and fell and fought one another, not quite in that strict historical order). 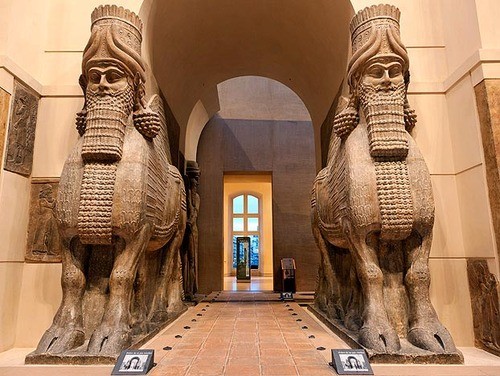 There are at least five screens with mini-lectures on aspects of the history of the archaeology of Mesopotamia (something that began in the 1800s) and a catalogue accompanies the exhibit with an interpretative essay by the Canadian curator Clemens Reichel. The exhibit indeed points out that the Assyrians conquered Israel and took their people captive deporting them to Assyria (the "first" ethnic cleansing?) and of course that Nebuchadnezzar conquered Jerusalem.

The Jews and their curious book the Bible that was finalized during the Babylonian exile get very little attention, ("By the rivers of Babylon...") although in a section on "leadership" there is short quote from Golda Meir, a former prime minister of the modern state of Israel. And then there is a curious and vacuous film on the wall where a Canadian journalist who works for Al Jazeera makes a short and incoherent speech about "globalism" perhaps implying that globalism too started in ancient Mesopotamia, but we have to read between the lines of this "multi vocal" exhibit in order to figure out if that is or was the case.

There are a number of fundamental weaknesses to the exhibit. The first is that, minus a few Greek fragments, it is the Christian Bible readers in Europe who kept our only historical memory of ancient Mesopotamia alive for 18 centuries before the explorers and archaeologists started "digging up the Bible." The second is that the British and European explorers and archaeologists who first excavated these sites were motivated to do so because of their love of and interest in the Bible. They wanted to know if archaeology could demonstrate a factual basis to the Bible.

In the early 1840s Austen Henry Layard discovered and uncovered buried Assyrian cities such as the ancient capital of Nineveh and brought back numerous sculptures from these ancient royal palaces. His book became a Victorian best seller. Layard wrote his mother during his early excavations saying; "Ezekiel probably saw the Assyro Chaldean palaces in their glory before their destruction..."

Or take a later example that of 20th century excavator of the Royal Cemeteries of Ur, Sir Leonard Woolley, whose excavated artifacts and photos of royal burials adorn a large wall in the exhibit. It is not highlighted that in order to make sense of his excavations he wrote a book called Abraham. Recent Discoveries and Hebrew Origins in 1936. Not surprisingly, if you look at this part of the exhibit carefully you will see much evidence for the human sacrifice of royal slaves or servants to accompany their ancient Mesopotamian kings into the afterworld, something that the invisible God of Abraham despised and which is expressed in the Biblical story of the (near) sacrifice of Isaac (Remember that Abraham came from ancient Mesopotamia).

The second weakness is that there is precious little in the exhibit or the catalogue to show the transmission of the ancient Mesopotamian firsts into the Greek and Hellenistic world and then to us moderns, apart from an explanation that our sixty second, sixty minutes to the hour system was invented and spread out from Mesopotamia.

The third and most colossal weakness is the inability of the exhibit or the author of the catalogue to point out the central and fundamental feature of the "civilizations" of ancient Mesopotamia. They were all varieties of tyranny. Yes, in the beginning there were warring city-states with what were probably "local chiefs" but these quickly succumbed to the might of the empires of Assyria and Babylonia with their absolute monarchs. 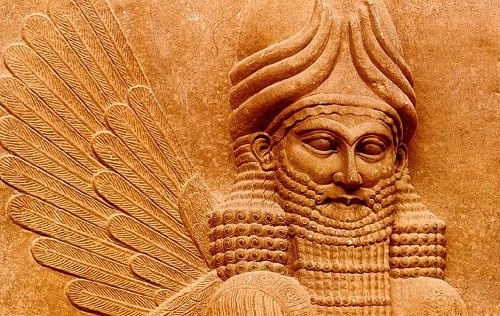 In the exhibit catalogue the curator blithely writes, "Compared to their Sumerian predecessors, Akkadian kings showed very different concepts of kingship in their royal titles such as 'King of the Universe' and 'King of the Four World Quarters' ...Sargon's grandson Naramsin took the concept of kingship to a new level by making himself a god." Without irony the next paragraph in the catalogue states, "Akkadian Kings had to contend with numerous rebellions..." I wonder why? On page 67 when speaking of the Assyrians the author points out, "Penalties for subdued enemies and rebels in particular could be harsh: they could be flayed, impaled or, if kept alive, blinded. Numerous scenes on Assyrian reliefs show piles of heads, with scribes duly tallying up the number of slain enemies."

The ROM Curator reveals himself when on page 72, he writes, "Although Babylonia did not pursue the politics of colonization beyond the heartland... they continued the policies of forced deportations of unruly populations in its conquered territories." Yes those damned "unruly" Judeans, with their invisible God and their obnoxious ten commandments, which by the Babylonian captivity were centuries old and quite distinct in form and content from Hammurabi's Stelae (although the exhibit suggests otherwise).

The author then blithely continues, "The most famous example... is the 'Babylonian Captivity' the deportation of the state of Judah to Babylonia between 597 and 582 which lasted until 538 BC. "At least the author cites the books of Jeremiah, Kings, and Daniel to support this historical fact. The exhibit then ends with pictures of the destruction of archaeological sites during the two gulf wars and the hopes that the cultural heritage of Iraq can be saved (is this subtle, politically-correct criticism of the Americans and Brits who were key players in taking out Saddam Hussein?).

Perhaps the greatest historical and moral error of the exhibit is not pointing out that the only contemporary document that we have from those that resisted the often terrifying, brutal, and consistent tyrannies of ancient Mesopotamia, is the Bible, which chronicles the "resistance" of one "rebellious" and "unruly" people who worshipped God and not man.

However, if you think that the example of these ancient tyrants has not affected modern Iraq, think again. We must remember that during 1941 Iraq experienced a pro-Nazi coup d'état that triggered a British invasion. Writer David Vaughan Elliot also reminds us that Saddam Hussein often spoke of himself as a successor to Nebuchadnezzar. In 1987 he established the Babylon International Festival whose slogan was "From Nebuchadnezzar to Saddam Hussein, Babylon rises anew on the path of construction and glorious jehad." The festival's medallion illustrated the profiles of Hussein and Nebuchadnezzar.

Had Saddam Hussein not brought about his death through the very ancient Mesopotamian custom of invading his neighour (modern Kuwait) he might have asked for the exhibit to visit Iraq. No doubt he would have felt right at home among these ancient despots. For the real lesson than any literate person should take away from this exhibit is that indeed ancient Mesopotamia contains the origins of modern civilization, in its tyrannical and bloodthirsty horror, with its tyrants like Saddam, Stalin, and Hitler worshipped like ancient Mesopotamian despots, cults of personality and all.