Warning: mysqli_free_result() expects parameter 1 to be mysqli_result, bool given in /var/www/html/americanthinker/admin/common/functions/func.general.php on line 126
 A Teachable Moment on Recess Appointments - American Thinker
|

A Teachable Moment on Recess Appointments

Obama's brazen attempt to nullify the separation of powers has been slapped down by yet a third federal court. The 4th Circuit held in National Labor Relations Board v. Enterprise Leasing Company Southeast, LLC that orders compelling two companies to recognize unions as their employees' bargaining agents cannot be enforced because the NLRB lacked a quorum when the orders were issued. The reason no quorum existed: Obama evaded the Senate's power of advice and consent by making recess appointments while Congress was in session. And that, the court said, is unconstitutional.

The decision was not exactly groundbreaking, since the 4th Circuit was following in the footsteps of the DC Circuit (Noel Canning v. NLRB) and the 3rd Circuit (NLRB v. New Vista Nursing). But although Enterprise Leasing closely adheres to Noel Canning, it offers a teachable moment all its own about the arrogance of Obama and his water-carriers in robes. Once the three-judge panel agreed that the NLRB rulings were correct, the question ofthe constitutionality of Obama's recess appointments took center stage. What ensued was a lively three-way debate over the meaning of the recess appointments clause. (The three arguments on the constitutionality of recess appointments can be read here: Hamilton at 56, with a rebuttal of the dissent at 104; Duncan at 126; and Diaz at 130.) 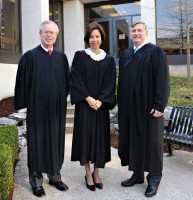 The result was a 2-1 win for the separation of powers. Recess appointments must be made during "the Recess" between sessions of Congress, not during "an adjournment," and they can only fill vacancies that "happen" while Congress is not in session. Judge Allyson Duncan concurred in full with Judge Clyde Hamilton's majority opinion and Judge Albert Diaz, appointed to the court by Obama in 2009, dissented.

Ah, there's the rub. Appointed by Obama. In the very best progressive tradition, Diaz's dissent rejects a mythical "strictly textual interpretation" of the Constitution to advocate a reckless, and to all intents and purposes limitless, expansion of executive power. Why? So that a federal government whose very existence was viewed with caution or even apprehension by the Framers will never be "unavailable for business." That is, can keep its administrative boot on the throat of every American unrestrained by political resistance from the Senate or judicial resistance from the courts. In the process Diaz manages to ignore the rules of English grammar, the plain meaning of ordinary English words, common sense, logic, history, and the clear and unarguable intent of the Framers to place powerful restraints not only on the exercise of the president's appointment powers, but on the power of the federal government as a whole.

Since the strictly textural argument is in fact not conclusive, Hamilton lays out a broader argument supporting intersession-only recess appointments (Majority Opinion at 93-103). It rests upon six major points:

• this distinction is consistent with the Framers' understanding of "the Recess" in Federalist 67;

• it is supported by history since, with only one exception, no intra-session recess appointments were made between 1789 and 1921, and most have been made since 1981;

• intra-session recess appointments thwart the advice and consent function of the Appointments Clause;

• intra-session recess appointments erase the durational guideposts in the Appointments Clause, allowing duration to be greatly extended by clever timing; and

• intra-session recess appointments "prevent the Senate from establishing its own rules concerning the conduct of its proceedings."

Hamilton may have done the heavy lifting, but Duncan's concurrence is priceless: it is not only quite brief, and therefore readily accessible, but cuts right to the heart of the dissent's progressive sophistry to teach a lesson every conservative should learn. Diaz dances the old familiar progressive two-step to make the real world disappear and reframe the argument in progressive terms: 1) the dissent deflects attention from the language of the Constitution and the real world facts that language seeks to control; then 2) replaces them with a purpose attributed to the Framers, but which can be manipulated to induce a kind of tunnel vision in which only the progressive agenda remains visible.

Duncan is not fooled. The dissent

faults the majority's textual arguments, but, significantly, proffers none in response. Rather, the dissent falls back on the same purposive reading of legislative tea leaves for which it chides the majority, but without any textual underpinning.

The first half of the progressive two-step is profoundly dishonest: rather than present a fact-based argument, it simply insists that no facts can be known with certainty. The clear implication is that Diaz does not have to prove his set of facts carries the day because no factual evidence can be dispositive. Textural arguments and appeals to history, common sense, and logic, no matter how persuasive, may simply be dismissed as inconclusive.

Duncan immediately homes in on the inherent weakness of such a ruse:

It is certainly noteworthy that "the Recess" sits in grammatical tension with a reference to all inter-and intra-session breaks. And although perhaps not decisive, the interplay of "recess" and "adjourn/adjournment" and the framers' use of "Session" at least tips the scale of the textual argument in favor of the majority's intersession-only reading of the Recess Appointments Clause when there is no counter-weight in the balance.

This is the best antidote to progressive deflection: bring the Constitution and its Framers back into focus and hammer home the idea that the progressive argument lacks substance. Which brings Duncan to step two:

I am further troubled -- and unpersuaded -- by the dissent's skating past the constitutional text and "looking to the purpose of the clause as our lodestar." If, as the dissent contends, the text is ambiguous, surely discerning the proper application of the Recess Appointments Clause's purpose is even more so.

Precisely! The objective of the progressive "solution" is not clarity, but manipulation. Diaz acknowledges that the purpose is twofold, "to ensure a functioning government and maintain the separation of powers." Yet, as Duncan points out, the dissent reaches its conclusion not by reconciling those purposes, but by elevating the first and ignoring the second to create radical imbalance.

The most convincing explanation for Diaz's sophistry: ensuring a functioning executive branch advances the progressive agenda while maintaining the separation of powers does not.The dissent is results-oriented jurisprudence in spades, with the balanced purpose of the Framers ground down to a tool of partisan politics.

Duncan continues to hammer homeher point that the real-world result of justifying recess appointments made intra-session or to fill pre-existing vacancies would not be efficiency, but lawlessness. In an area of law calling for "high walls and clear distinctions" the dissent's call for intra-session recess appointments "offers no guidance, meaningful or otherwise." Instead, it "raises more questions than it answers," and some of those questions would be "problematic."

What constitutes the Senate's "regular course of business"? What precludes the Senate from providing its advice and consent during a pro forma session? How long must the Senate be unavailable to receive messages, and what (and who) determines its unavailability? Would a senator filibustering a nominee mean the Senate "cannot meet to consider that nominee for a position," and therefore give rise to the President's recess appointments power?

To see that Duncan is right we need only look to the NLRB lawlessness and contempt for the courts we already have.

Mr. Stewart is a freelance writer living in Austin, Texas. He is writing a book on the establishment clause and welcomes feedback at edward.stewart27@yahoo.com.