Warning: mysqli_free_result() expects parameter 1 to be mysqli_result, bool given in /var/www/html/americanthinker/admin/common/functions/func.general.php on line 126
 To Swab or Not to Swab - American Thinker
|

To Swab or Not to Swab

Those in support of allowing police officers to obtain a DNA sample without a warrant equate it to fingerprinting and photo-taking (mug shots) already used by law enforcement as a routine part of a detainee's booking procedure when arrested.  Justice Anthony Kennedy, who voted in favor of the ruling, wrote: "Taking and analyzing a cheek swab of the arrestee DNA is, like fingerprinting and photographing, a legitimate police booking procedure that is reasonable under the Fourth Amendment."  Conservative Justice Anton Scalia, however, in voting against the ruling, said: "Make no mistake about it: because of today's decision, your DNA can be taken and entered into a national database if you are ever arrested, rightly or wrongly, and for whatever reason" (Court: Police can take DNA from arrestees).

Fingerprinting technology as a means of identification and for connecting criminals to crime scenes has been employed by law enforcement agencies for decades -- so much so that no one questions the legality or the "constitutionality" of the procedure.  Perhaps the reason very few hesitate giving their fingerprints is because the only information gleaned from a fingerprint is the identity of the person to whom the fingerprint belongs.  Of course, if that person has committed a crime in his/her past, that may also be revealed when the fingerprints are processed.  Indeed, people are so comfortable with fingerprinting that millions of people willingly submit to the procedure in their line of employment, this author included. 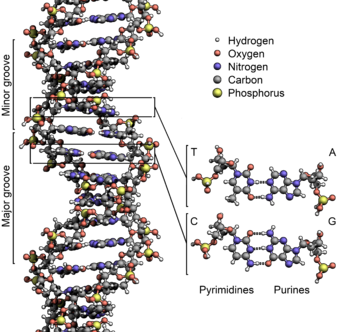 In a nutshell, "Although 99.9% of human DNA sequences are the same in every person, enough of the DNA is different to distinguish one individual from another, unless they are monozygotic twins.[2] DNA profiling uses repetitive ("repeat") sequences that are highly variable,[2] called variable number tandem repeats (VNTRs), particularly short tandem repeats (STRs). VNTR loci are very similar between closely related humans, but so variable that unrelated individuals are extremely unlikely to have the same VNTRs."

Proponents of mandatory swabbing for DNA claim that DNA profiling is much more precise than a mere fingerprint in the ability to connect a criminal to a crime.  Indeed, with the use of DNA profiling, many "cold cases" that might have remained unsolved forever have now been closed.  In addition, DNA profiling has also been beneficial in proving the innocence of a wrongly accused person(s).  The Innocence Project states that "there have been 307 post-conviction exonerations in the United States -- 18 of which served time on death row."

Opponents of mandatory DNA swabbing cite the Fourth Amendment to the United States Constitution, which states, in part: "The right of the people to be secure in their persons, houses, papers, and effects, against unreasonable searches and seizures...shall not be violated, and no Warrants shall issue, but upon probable cause[.]"  Just as fingerprints are unique to each individual, so is DNA.  However, fingerprints are "readily available," so to speak.  A person leaves a fingerprint on anything he/she touches, wherever he/she goes.  Unless one wears gloves, it is impossible not to leave a fingerprint.  An untainted DNA sample, though, can come only from swabbing a person's cheek or drawing a blood sample -- which opponents claim is a violation of one's person.  Constitutionally, then, a warrant, showing probable cause, must be acquired before a DNA sample is obtained.

Another concern, and with good reason, is the fact that the federal government would have access to any person's DNA profile -- and given what these profiles reveal about a person, the government could use the information against an individual or a group of people that, perhaps, it feels poses a threat.  Given the ongoing debacle of the IRS scandal, in which Tea Party and conservative groups applying for tax-exempt status were targeted, resulting in their applications being delayed, to say that the government could use DNA information against a person is not a beyond imagination.

Along that same line, with the ability to determine if a person has a propensity toward a debilitating or life-threatening disease, would the government use the DNA-provided information to eliminate certain people using the excuse that to care for people with these types of affliction would be a financial drain on the health care system?  Given the reports we've heard of "death panels" hidden in the pages of ObamaCare, and citing the testimony of those who have been denied care or certain procedures due to age or health status already, this doesn't appear to be a far stretch.

All of this notwithstanding, though, when considering the spirit and intent of the Fourth Amendment of the United States Constitution, mandatory DNA profiling is clearly unconstitutional.