The Boy Scouts' Next Capitulation

To encourage his demonic protégé, Screwtape explained to Wormwood, "It does not matter how small the sins are, provided that their cumulative effect is to edge the man away from the Light and out into the Nothing... Indeed, the safest road to Hell is the gradual one -- the gentle slope, soft underfoot, without sudden turnings, without milestones, without signposts."

With the Boy Scouts of America's (B.S.A.) decision to allow young gays into their ranks, another signpost warning against the sin of homosexuality has been removed.

In 2000, the U.S. Supreme Court ruled that the Boy Scouts had the Constitutional right to exclude gay members. This was because, as the Court concluded, opposition to homosexuality is part of the organization's "expressive message." Part of the Scout Oath states that Scouts will keep themselves "physically strong, mentally awake, and morally straight." The majority opinion in the 2000 ruling noted that the Scouts "teach that homosexual conduct is not morally straight," and that it does "not want to promote homosexual conduct as a legitimate form of behavior." 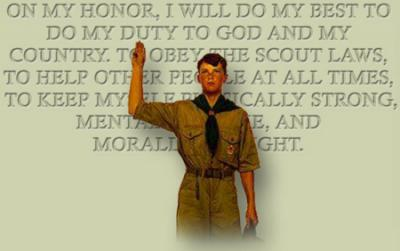 In his dissent of the 2000 Supreme Court decision, Justice John Paul Stevens declared, "it is plain as the light of day that neither one of these principles -- 'morally straight' and 'clean' [a reference to the Scout Law] -- says the slightest thing about homosexuality." It seems that the Boy Scouts have now surrendered that "expressive message" and agree with such an abhorrent and morally ignorant conclusion.

As Al Mohler warned prior to the B.S.A. vote, surrendering this core conviction "is both a legal and moral disaster." For example, with their "expressive message" now compromised, how now can the Scouts argue legally to prevent the inclusion of homosexual leaders? The 2000 case against the B.S.A. was brought by an assistant scoutmaster of a New Jersey troop, James Dale.

In 1990, while a student at Rutgers University, Dale gave an interview to a local paper that revealed he was gay. B.S.A. officials got wind of Dale's interview and expelled him from his position in the Scouts. On the advice of counsel, Dale wrote to the Boy Scouts asking why he was expelled. The B.S.A. replied that they "specifically forbid membership to homosexuals." Thus the B.S.A. has now lost the whole crux of their argument that led to the 2000 ruling.

What's more, as so often is the case when one begins to ignore moral absolutes, the Boy Scouts have opened themselves up to further moral erosion. After decades of battles leading to, among other things, the reversal of laws against sodomy, broad cultural acceptance, and marital rights, the homosexual agenda has (tragically) made significant progress. Now we get to face the ascension of another perversion that has long been "married" to the homosexual movement: transgenderism.

One of the most significant events that launched the homosexual movement occurred in 1973. That was the year that the American Psychiatric Association (APA), by a vote of 5,834 to 3,810, removed homosexuality as a disorder from its Diagnostic and Statistical Manual (DSM). About two weeks ago the fifth edition of the DSM was published. Guess what was not in it? That's right: gender identity disorder.

It was removed last year because, as the Associated Press recently put it, "a growing faction of medical experts who no longer see this as something to be fixed." Not that the APA has a great track record when it comes to what needs "to be fixed." As I referenced a few weeks ago, much of the DSM is simply made-up nonsense to (try to) help us make sense of what is evil. However, just as with homosexuality, by a simple vote, the APA lets us know what we no longer need to consider evil.

The Associated Press reveals, "Some experts predict that views on gender will evolve in much the same way they have for sexual orientation... Today, the gender spectrum includes those who are transgender, who see themselves as the opposite gender, and those who are gender variant, or gender nonconforming, whose gender is more 'fluid.' For kids, it means they identify part of themselves as boy and part as girl."

Sixteen states and the District of Columbia have granted legal rights to "transgender" people. In Colorado, the parents of a 6-year-old boy, who now, supposedly, wants to be a girl, are suing their school district for not allowing him to use the girls' bathroom. Radical Massachusetts laws are requiring schools to allow students who "identify" as the opposite sex to use whichever bathroom, locker room, and sports teams they choose.

In addition, the Massachusetts law (ironically!) allows no tolerance for students who are uncomfortable with the transgender directives. They are to be "re-educated," says pro-family advocate Brian Camenker.

Thus, how long will it be before the Boy Scouts are again in court? This time it will be a couple (probably same-sex) who wants their young girl -- who has decided that she wants to be a boy -- in the name of "tolerance" to be able to join the Boy Scouts. However, the fight won't last 23 years in this case. After all, the next moral compromise will be easier than the previous one.

Trevor Grant Thomas At the Intersection of Politics, Science, Faith, and Reason. http://www.trevorgrantthomas.com/