Aren't many illegal immigrants just retaking land that was stolen from Mexico? A recent CBS report suggested exactly that. Several historians I spoke with are concerned by the notion that amnesty is justified by the Mexican-American War (1846-48), and rightly so.

Some Mexicans see the American southwest as land stolen from them, and that attitude is not conducive to assimilation.

To see this attitude at work, consider the CBS report on the Mexican-American War, which concluded with a statement that troubled several historians. Speaking to CBS about that war, Yale historian Amy Greenberg said, "A lot of [American] people live in land that was taken from Mexico in this war and they're not aware of that."

She added, "I believe a lot of the immigration debate that's going on now operates in a vacuum where people are not realizing that in fact Mexicans are here in land that once belonged to Mexico."

I asked professor Greenberg if she thought that people should become more supportive of amnesty, after taking that history into account. She replied,"I don't know what the effect of a more historically informed discussion would be on the views of individuals debating immigration reform, but the effects of the lack of historical context are glaringly obvious -- highly polarized views and little common ground."

When I pressed Greenberg as to what outcome that "informed discussion" should have, she did not reply.

Historian Douglas Richmond tells me that Greenberg's remarks imply something deeply political: that America wrongly took Mexican land and thus we shouldn't be opposed to amnesty, an idea he rejects.

Richmond is Emeritus Professor of History at the University of Texas at Arlington, and author of The Mexican Nation: Historical Continuity and Modern Change. Richmond says, "While there is little doubt among most historians of Mexico that Polk provoked a war with Mexico to grab the southwest, that in no way justifies an amnesty program."

"I see no reason why our past aggression necessitates an amnesty bill. Why should the current generation pay for the sins of an older generation?" he asked.

Another historian, professor John Pinheiro of Aquinas College, believes that Greenberg's comments were "too simplistic": "Mexico's government could not get its citizens to move to its northern frontier, which is why in the 1820s it began giving land to Americans who were willing to settle there. In the meantime, successive coups and rebellions had left California virtually autonomous."

Pinheiro disagrees with Professor Greenberg's key assertions, like the claim that the Mexican-American War was "the first war that is fought for greed rather than principle in American history," and that it "was the first [American] war that was started with a presidential lie."

Pinheiro asserts, "What labeling [President Polk's] land claims a knowing lie does is obscure the fact that Mexico wanted war with the United States because it (and the rest of the world) thought it could easily win one."

Nevertheless, there is a version of history that portrays white, European Americans as villains and thieves of Mexican land. According to a Tucson, Arizona teacher who blew the whistle on La Raza ethnic studies courses, La Raza teaches children that "white teachers" do not want Hispanics to get ahead in life, and "that the Southwestern United States was taken from Mexicans because of the insatiable greed of the Yankee who acquired his values from the corrupted ethos of Western civilization."

The president has also offered a controversial vision of this history. In a 2010 speech to the Congressional Hispanic Caucus, President Obama stated:

Long before America was even an idea, this land of plenty was home to many peoples. To British and French, to Dutch and Spanish, to Mexicans, to countless Indian tribes. We all shared the same land.

The former colonies became an independent nation in 1776, but the Mexican war for independence didn't begin until 1810. It remains unknown what the president meant by saying that "Mexicans" were "home" in North America "before America was even an idea."

Stolen Land from an Unjust War

Pinheiro, author of the forthcoming Missionaries of Republicanism: A Religious History of the Mexican-American War, believes that there were valid reasons why the U.S. took what is now the Southwest. As historians have pointed out, Mexico wasn't extensively using the territory, and Mexicans at the time generally didn't want to live in the Southwest region.

Berkeley historian Brian DeLay says, "There simply were far fewer people in Mexico that were willing to move to the far north, this dangerous and unknown place to try to start better lives for themselves; they had other opportunities in Mexico."

"We had always been very populated in the south, and very unpopulated in the north because the conditions of agriculture are difficult," notes Josefina Zoraida Vasquez, a professor of history at El Colegio de Mexico.

The CBS report featured Salvador Rueda, director of the National History Museum at Chapultepec Castle, site of a key American victory in the war. Rueda said that Mexicans today view the war "as a disaster." "Mexico lost half of their own territory," he said, adding, the war is known as "Invasion Americana: American invasion."

CBS also interviewed Mexican history professor Fabiola Garcia Rubio, who said that the war generated a sense of Mexican nationalism, and that the emotions about the war are still very much "alive." She compared the monument at Chapultepec to the Alamo.

That sense of historical grievance was recognized by one of the most respected scholars in recent American history, the late Harvard political scientist Samuel Huntington. He observed, "No other immigrant group in U.S. history has asserted or could assert a historical claim to U.S. territory," except for Mexicans. "Quite understandably, they feel that they have special rights in these territories," but "[h]istory shows that serious potential for conflict exists when people in one country begin referring to territory in a neighboring country in proprietary terms and to assert special rights and claims to that territory." 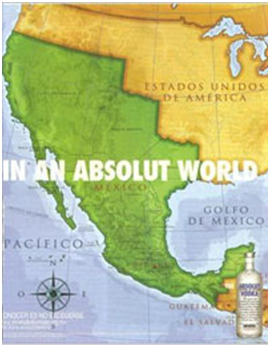 The resulting nationalist tensions have arisen in public. When Absolut Vodka created a controversial advertisement of a map of Mexico that included the American Southwest as Mexican territory, some experts recognized the appeal of the ad. The director of a prominent Latino advertising agency said, "Mexicans talk about how the Americans stole their land, so this is their way of reclaiming it. It's very relevant and the Mexicans will love the idea."

The infamous 2011 U.S.A-Mexico football game, played in Pasadena, CA, is another example. The Los Angeles Times reported that the U.S. team's "fans were vastly outnumbered" by Mexico's fans, and the U.S. "national anthem was filled with the blowing of air horns and bouncing of beach balls." The U.S. team coach said that the game was "a home game for" Mexico. One California resident, a Mexico fan, said, "I was born in Mexico, and that is where my heart will always be."

This context helps explain why professor Greenberg's remarks would stir controversy, particularly her assertion that "[American] people are not realizing that in fact Mexicans are here in land that once belonged to Mexico."

Behind the historical discussion of the Mexican-American War lies raw, special-interest politics, professor Richmond says. "Immigration has always been a means for ranchers, growers, and now businesses to have cheap labor."

Besides, the pro-amnesty Republican seems to be having a hard enough time remembering the 1986 amnesty debacle, where the amnesty-enforcement quid pro quo never delivered enforcement. It will take clearer thinking to appreciate the role of more distant history, which is not very far past.

John T. Bennett (MA, University of Chicago, Master of Arts Program in the SocialSciences '07; J.D., Emory University School of Law '12) is a former Army officer with tours of duty in Iraq, Afghanistan and Djibouti. His writing has appeared in Townhall.com, World Net Daily, and the Chicago Tribune, among others. "follow me on twitter"