Warning: mysqli_free_result() expects parameter 1 to be mysqli_result, bool given in /var/www/html/americanthinker/admin/common/functions/func.general.php on line 126
 The Sacramento Bee Dances on Texans' Graves - American Thinker
|

The Sacramento Bee recently caught some flak for a cartoon that it published, the left panel of which shows Texas Governor Rick Perry standing on a platform with a banner reading, "Low Taxes! Low Regs!" telling the audience that "Business is booming" in Texas. In the "payoff panel" to the right, we see a representation of the fertilizer plant explosion in West, Texas where fifteen people lost their lives and over two hundred were injured. 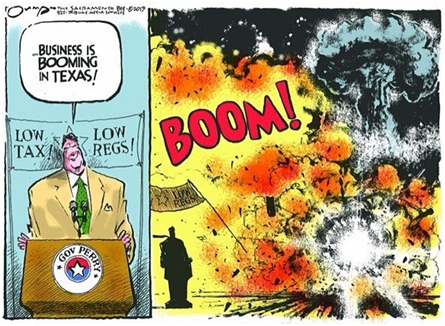 Apparently, cartoonist Jack Ohman's aim was not to mock the tragedy that took place, despite the cartoon's publication on the day of a memorial service to those who lost their lives, but to make the political point that a lack of regulation may have caused the explosion. Clearly, this is an effort to slather blood on Rick Perry's hands for the deaths that occurred in West.

Bad taste doesn't adequately describe such a thing. In principle, it is no different than the Westboro Baptists showing up at the memorial service in West, Texas to get their political message across. Both are suggesting that this was not a freak accident, but the result of some wrongdoing by others. Granted, the Westboro church's claim that God made it happen because of homosexuals or our involvement in the Middle East is slightly more kooky than Ohman's -- but only slightly. More on that in a moment.

But for some reason or another, Ohman is "stunned" at the reaction the cartoon has received. "Not just by the massive response," he says, "but by the willful misinterpretation of the cartoon." Rick Perry wrote a letter to the Bee expressing his disgust, but the editor backed his cartoonist, saying that Perry and the blogosphere got it all wrong. The cartoon isn't meant to mock the tragedy, but to point out that what is "offensive is a governor who would gamble with the lives of families by not pushing for the strongest safety regulations."

Apparently Ohman and his editor have very little respect for Americans, obviously believing us incapable of gleaning the purpose of the cartoon and therefore misunderstanding it. But trust me, guys, we get the "joke," and got it long before you decided to explain away all the "subtlety." It's just that it's incredibly stupid, and yes, insensitive.

Having a political agenda behind your stupidity and insensitivity doesn't absolve you from being culpable for it. Rather, it just means that you are willing to exploit the tragedy for political purpose. So spare us the "we had a noble purpose" routine. Again, your purpose is no nobler than the Westboro nutjobs.

The cartoon suggests that the same "low regs" that Rick Perry touts to poach California's over-regulated businesses are responsible for this accident. So the implication is that if there were more government regulation, the explosion wouldn't have happened.

Granted, we don't know exactly what caused the explosion yet. Could have been human error or any number of reasons, but a humorist and an editor from California who know nothing of industrial production are certain -- if there was more regulation, it probably wouldn't have happened.

Government regulation is the recommended panacea of the progressive media elite, but when you examine the substance, it's nothing more than a placebo to make people who don't know anything about a given subject feel better. They believe that they are putting "experts" in charge. It seems a travesty that this needs to be explained to two such lofty intellectuals as Ohman and his editor, but accidents sometimes happen regardless of how many overpaid government bureaucrats are overseeing something.

Take a 2010 explosion at a gas-fired power plant in Connecticut, where six people died and fifty were injured. Regulated-to-death Connecticut can't claim the "low regs" that Texas does, but did that make them any less susceptible to industrial accident? Sure, OSHA came in and fined construction companies after the fact, but the preventative regulation didn't matter a bit. The people in the Connecticut explosion are just as dead as the people in West. The only difference is, the dead people in Connecticut did not have their tragic deaths exploited to fuel attacks and a political vendetta against conservatives who oppose excessive government regulation. The dead people in West, Texas, did.

And yes, there should be an apology for that. The fact that one doesn't seem to be forthcoming only signifies the ignorance and arrogance of Jack Ohman and the Sacramento Bee.

William Sullivan blogs at: http://politicalpalaverblog.blogspot.com/and can be followed on Twitter.