Warning: mysqli_free_result() expects parameter 1 to be mysqli_result, bool given in /var/www/html/americanthinker/admin/common/functions/func.general.php on line 126
 The Betrayal of Hillary Clinton - American Thinker
|

The Betrayal of Hillary Clinton

Hillary Clinton might have been a little touchy about Benghazi when she testified to Congress in January because Barack Obama had thrown her under the bus, abandoning her philosophy of "normalization" -- the policy of intentionally minimizing security around embassies and other diplomatic facilities.

A report by the historian Arthur Herman on Fox News last October describes the situation before the attack:

Twice the man in charge of security for our diplomats in Libya, Greg Nordstrom, begged the State Department for more security in Benghazi after no less than 48 security "incidents" there, including two bombings.

Washington, however, said no. Hillary Clinton... had her minion Charlene Lamb... tell Nordstrom that State wanted "to normalize operations" in Libya and to "reduce security resources."

Clinton defended normalization in a speech on October 13, 2012, a month after the attack. "We will never prevent every act of violence or terrorism, or achieve perfect security," Clinton said. "Our people can't live in bunkers and do their jobs... Diplomacy, by its very nature, is often practiced in dangerous places." 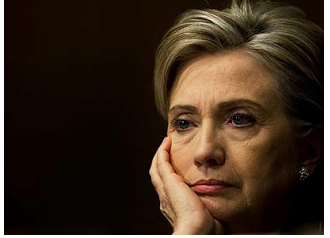 I disagree with this assertion; a desk officer doing the job of issuing visas deserves a safe workplace. The diplomatic security debate however reflects a larger conflict between the Department of State and our military and intelligence communities. By placing their faith in diplomacy, Obama and Clinton elevate the job of the diplomat to include gathering intelligence and winning hearts and minds, tasks that are better suited to the CIA and the military.

In the days after Benghazi, Ambassador Stevens was characterized as a romantic who spoke Arabic and liked to mingle with the people without the insulation of security -- a kind of modern-day Lawrence of Arabia. Later, this narrative was challenged, notably by John McCain, who claimed that Stevens requested increased security.

Sentiments similar to Hillary's were expressed in a November 14, 2012 New York Times article titled, "Can American Diplomacy Ever Come Out of Its Bunker?" Foreign Correspondent Robert F. Worth presents a history of security measures at American embassies, which began a transformation under President Reagan after the April 1983 bombing of the Beirut embassy left 63 people dead. A few excerpts:

The death of an ambassador [in Libya] would not be seen as the occasional price of a noble but risky profession; someone had to be blamed...

Lost in all this partisan wrangling was the fact that American diplomacy has already undergone vast changes in the past few decades and is now so heavily encumbered by fortresslike embassies, body armor and motorcades that it is almost unrecognizable...

The mantra of "security" will only grow louder. As a result, some of the country's most distinguished former ambassadors are now asking anew what diplomacy can achieve at such a remove.

Guess who is now chanting "the mantra of 'security'"?

In the second presidential debate, Obama claimed, "nobody's more concerned about safety and security [of American diplomats] than I am."

At his press conference on May 16, 2013, Obama brought up the funding issue; he "called on Congress... to take action to bolster security at American Embassies... I'm calling on Congress to work with us and support and fully fund our budget request."

The Washington Post comments cluelessly: "we don't understand why Boxer would frame the security funding problem in such partisan terms." According to the Post, "while Boxer claims that Republicans 'cut' the budget, she is only comparing it to what the Obama administration proposed. The reality is that funding for embassy security has increased significantly in recent years."

The larger point is that in none of these examples does any Democrat bring up the philosophy of normalization. They've all become security hawks, which given that it involves spending money was not so painful.

Hillary Clinton's idealism before Benghazi has vanished, even though it is ideologically consistent with President Obama's foreign policy philosophy, set out in his 2009 speech at Cairo University:

I've come here to Cairo to seek a new beginning between the United States and Muslims around the world, one based on mutual interest and mutual respect...

Now, we also know that military power alone is not going to solve the problems in Afghanistan and Pakistan... I also believe that events in Iraq have reminded America of the need to use diplomacy and build international consensus to resolve our problems whenever possible.

Obama rejects the hard power of military force, but his "new beginning" is not a classic soft power approach -- more like a "no power" approach. The goal of both soft power and hard power is to advance American interests abroad, and Obama's highest goal is "leading from behind" -- "diplomacy" and "international consensus" where the United States takes its place in the world among the nations, as an equal, or perhaps, given the sins of our fathers, as an inferior penitent. Speak softly, but don't carry any kind of stick, because only hoodlums carry sticks.

In the world, it means cutting our military budget and unilaterally dismantling our nuclear arsenal so that other nations will trust us and won't react aggressively in response to our aggressive stance. In Benghazi, it means, or used to mean, normalization.

A North Korean missile obliterating San Diego? Tragic, but that's the price for transforming the global power structure. Four deaths at the hands of "some guys out for a walk one night"? As Rep. Elijah Cummings succinctly put it in the recent Benghazi hearings, "death is part of life." In the words of the New York Times reporter cited above, "The occasional price of a noble but risky profession." Deplorable, but it's the cost of achieving the higher goal of friendly relations with the Muslim world.

We can denounce this philosophy as dangerously naïve, but naïveté is not an impeachable offense. Obama might have fared better had he stuck to his guns and defended Clinton's normalization policy. We know though, this isn't who he is. When Obama is threatened politically, betrayal and lies come naturally.