As a presidential speech writer for the first Bush White House, I am always very interested in what presidents say in their formal speeches. They know, of course, that their remarks will be widely covered by the press, studied by analysts, and influential in contemporary political debates.  For that reason, presidents rarely speak off-the-cuff, and their every word is carefully chosen for exactly the message the White House wants to convey to the public. Their graduation speeches, like all presidential addresses, go through many drafts and are reviewed by high-level administration officials to ensure that they accurately reflect the administration's policies and priorities.

That's why President Barack Obama's speech at Ohio State University's 2013 Commencement should trouble all Americans.  The speech was permeated with his distorted sense of America; he baldly stated -- as though it were the essence of this country -- that we need to "reject a country in which only a lucky few prosper."

A typical commencement address is focused on lofty ideals and challenges graduating students to live up to their potential as they enter the workforce and assume adult responsibilities.  But not this one!  The Ohio State speech was billed as a defense of democracy and a challenge to students about the importance of citizenship.  Mr. Obama, however, chose to be, once again, very political; he delivered a speech that stands out as uniquely partisan with the "us-against- them" rhetoric that has become all too predictable.  And, true to form, this speech was appallingly un-presidential (even using the phrases "fight like heck" and assuring the graduates that they will "screw up" -- this from a president of the United States in a formal address?), even among numerous other Obama presidential addresses that have been un-presidential in both tone and content. 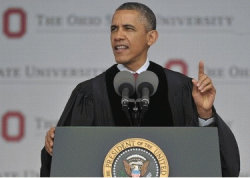 The bottom line of the Ohio State speech was that, according to President Obama, being a good American boils down to hating those who dislike his policies.  He blatantly asked the students to "reject those voices" of his opponents, whom he repeatedly caricatured with phrases describing them as people who view government as a "separate, sinister entity" who are "doing their best to gum up the works."  He distilled conservative views down to caricatures: "tyranny is always lurking just around the corner" and calling conservative views a "sham" that "can't be trusted."  He slyly implied that it was the middle class against the rich lobbyists and the "well-connected" who get "special treatment that you don't get."  He insinuated the idea that the GOP was against those things "the vast majority of their constituents want" and are to blame for the "deteriorating climate that threatens everything we plan to leave for our kids and our grandkids."

The president noted that he had visited the Ohio State campus five times "in the past year or so" -- partly explaining why he won Ohio in the 2012 election.  He couched his appeals to the idealism of the young in terms of his old "hope" and "change" campaign rhetoric -- "people who love their country" will want to "change it for the better."  Once again, he played to the lower natures of the electorate -- sympathizing with the students over "all the times you've been let down" and identifying with their frustration "at the hand that you've been dealt."

The president's cavalier attitude about the Boston massacre was breathtaking; he mentioned in a long litany of times when the students saw citizenship in action, "when the bombs went off in Boston"  --  as though the explosions were on a par with a nature disaster, even though he described shooting attacks as "malevolent spree(s)."  He also couldn't pass up the opportunity to accuse the "institutions of our society" that have "betrayed your trust." Nor, in spite of his promise to not be partisan, could he neglect criticism of Wall Street or blaming the GOP by implying that it is their fault that "democracy isn't working as well as we know it can."  He also joked that the students should actively participate in democracy by "voting, eagerly and often."  And, he got in the obligatory bow to the homosexual activists: urging the students to work to "secure our God-given rights  . . . regardless . . . of who [sic] they love" and included "gay rights" among the great causes for which people have fought.  And, of course, he got in his digs about gun control and climate change.

As someone with a doctorate in communication theory who spent years analyzing presidential speeches and studying political rhetoric, I've never seen a presidential speech that was more repulsively self-centered and insidiously self-serving; nor has a previous president operated in campaign mode so unrelentingly throughout his presidency, regardless of the occasion or circumstances.

Sadly, pathetically, Mr. Obama seems to really believe that anyone who opposes his agenda is un-American, and he continues to blame everyone but himself for his failures and for the multiple crises we face.  His rhetoric is designed to stir up voters' emotions and mobilize them for the radical agenda in the community organizing campaign that is his presidency.