I landed upon a classic movie while surfing TV channels.  Kirk Douglas played a down-on-his-luck news reporter.  When I began watching the movie, a man named Leo was trapped in a collapsed cave.  Douglas managed to crawl within a few feet of Leo and was chatting with Leo, assuring the scared man that he would be rescued ASAP.

But secretly, Douglas had other plans.  Keeping Leo trapped for at least seven days could revive Douglas's career.  He had exclusive access to Leo.  Writing daily updates could produce tremendous financial rewards; it could land Douglas a job with a major newspaper and a possible Pulitzer Prize.

Now here is the despicable aspect of the story: the engineer said his crew could get Leo out of the hole in sixteen hours.

Douglas manipulated the corrupt local sheriff, who was seeking re-election, to pressure the engineer to use a slower technique that would take at least five days to remove Leo from the hole.  On the fifth day, when the crew was within a few feet of reaching him, Leo died. 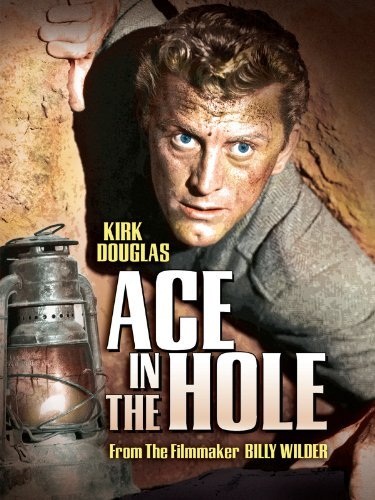 Folks, I was struck by how closely the scenario in the movie paralleled real-life current events.  After the movie, I told my wife, "Oh my gosh, I just watched the Obama administration in Benghazi."

Like Leo trapped in the hole, U.S. Ambassador Chris Stevens was trapped in our consulate in Benghazi, fearful for his life.  Our compound was under attack by Ansar Sharia terrorists.  Both Leo and Ambassador Stevens were mere pawns in games of chess orchestrated by powerful character-deficient men.

Hicks said commander Lt. Col. Gibson and his team were coming to their rescue -- ready to board a C-130 from Tripoli to Benghazi to defend the U.S. compound.  But then Col. Gibson got a phone call from SOCAFRICA on behalf of the Obama administration: "You can't go now; you don't have the authority to go now."  Col. Gibson and his troops were ordered not to board the flight.

Hicks added that the consulate was under-secured.  In an interview, Hicks stated, "... we had already essentially stripped ourselves of our security presence, or our security capability to the bare minimum."

Why were courageous Americans Col. Gibson and his team, who were fired up and ready to save the lives of fellow Americans being killed in Benghazi, ordered by the Obama administration to stand down?

Like the life of poor Leo in the movie, the lives of Ambassador Stevens and three other Americans were deemed expendable -- acceptable collateral damage, sacrificed in the furtherance of an agenda.

Many are theorizing about why Ambassador Stevens and his staff were left to fend for themselves.

A popular theory is that Ambassador Stevens was sacrificed for Obama's re-election.  The terrorist attack on our consulate happened September 11, 2012, a few months before the presidential election.  Prior to the terrorist attack, Obama had been enjoying his "I killed Osama bin Laden, so now terrorism is over" victory lap.

The terrorist attack on our U.S. consulate in Benghazi proved that Obama's declaration that terrorism against America is over is false.  That was not good -- especially right before the election.

The Obama administration knew immediately that Ambassador Stevens was murdered by Ansar Sharia terrorists.  And yet, for weeks, President Obama, former Secretary of State Hillary Clinton, and an administration spokesperson lied to the American people, saying our consulate was attacked by unorganized protesters angry about a video.  U.N. Ambassador Susan Rice, a black woman, was first to hit the airwaves spreading the administration's agreed-upon lie (after twelve behind-the-scenes drafts) on five national TV news programs.

In typical low-rent bully Democrat fashion, the Obama administration attempted to silence anyone daring to question the validity of Ambassador Rice's lie by calling such people racist and sexist.  And right on cue, the mainstream media had the administration's back, persecuting those who rejected Rice's lie.

When a character in a movie places self-serving career interests over the life of another human being, it is a great morality tale.  When the president of the United States displays the same behavior, it is frightening.