The Snows of Rainier

On March 26th 2013, retired Professor Don Easterbrook from Western Washington University gave a devastating testimony before a Washington State Senate Committee against the belief that human induced CO2 is causing global warming.  He opened up his presentation by criticizing media bias and the politicization of science through climate change, and said the planet is getting cooler rather than warmer. 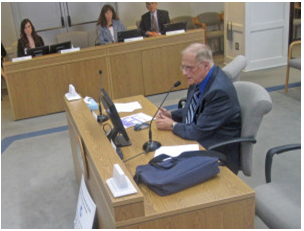 Easterbrook acutely remarked that while CO2 levels have continued to rise since World War II, the planet underwent a significant cool down between 1940-1975. He also emphasized that another cooling trend abruptly began again in 1998. Like the cycle of 1940-1975, Easterbrook predicted cooling weather will continue for the foreseeable future. So far his prediction has come true -- and CO2 levels continue to rise.

Although many greens in Washington State were earlier trying to use lower snow packs in the Cascade Mountains as evidence of global warming, such arguments have fallen by the wayside as the snows of Rainer have returned and continue to mount since the late 1990's after a 20 year period of mediocre snowfalls (1976-1996). In early April 1999, Paradise Ranger Station on Mt. Rainier (+14,411) recorded a whopping 280 inches of snowpack on the ground -- which is over 23 feet. That same year, Mt. Rainier's twin sister to the north, Mt. Baker (+10,750), broke the all-time snowfall record for one year with 1,140 inches (95 feet -- snowfall does not record snowpack, only the accumulation of each particular snow event) at its ski resort. The previous all-time record for snowfall in one year was held by the Paradise Ranger Station itself when 1,122 inches of snow fell in the winter of 1971-72. By mid-April of 1972, there was 302 inches of snow on the ground at Paradise, which is over 25 feet. That Washington State snow is very wet and heavy also indicates that such deep snowpacks are profound indeed. In other words, the Washington Cascades are some of the snowiest mountains on earth. Though the Cascades are certainly localized to the Pacific Northwest, they are still important weather barometers.

However, the great snows between 1945-1976 came to an abrupt end by the spring of 1977 in which Paradise only had 126 inches of snow on the ground, barely over ten feet. More modest snow packs continued on up until the spring of 1996. Between 1976-1996, the Paradise Ranger Station surpassed the 200 inch mark only twice -- in the springs of 1982 and 1984. This was a very marked change from previous decades.

As such, the 1997 hefty spring snowpack at Paradise of 258 inches (almost 22 feet), was actually a harbinger of much snowier winters to come. Since 1997, Paradise has surpassed the 200-inch mark eight times. Even this last winter, which was very quiet for Pacific Northwest standards, Paradise still showed a snowpack of 197 inches in mid-April -- just 3 inches shy of that exceptional 200 inch mark.

Since 2006, Paradise has averaged a very snowy 205 inches of snowpack each year, compared to only 168 inches between 1976-1996. Even more incredible, on June 1st 2011, Paradise still had a snowpack of 201 inches -- it is off the charts to have so much snow on the ground so late in the year. Since 1996-97, Paradise has averaged 196 inches of snow pack each year, which is actually a very high number because such consistency spans almost two decades. The snows of Rainier have thus been perfectly consistent with Easterbrook's contention that 1940-75 represented a cooling trend, and that the warming trend of 1976-1997 was halted by the present cooling trend that began in 1998.

In other words, in spite of the fact that global warming advocates have been complaining that the weather of the 21st century has so far been the warmest on record, it is simply not true. According to Easterbrook, such hand-wringing is not based on original raw data, but has been created from computer model adjustments that artificially elevate the warmth of this last decade and purposefully devalue the truly warm decade of the 1930s -- the Dust Bowl years. Easterbrook states 1936 was the hottest year as far as modern records are concerned, but he also pointed out that in ages past, the earth was far warmer than it is now. Easterbrook went on to say the planet is still in the process of coming out of the Little Ice Age (1300-1850), and that the warm-up began long before human induced CO2 could have been the culprit. 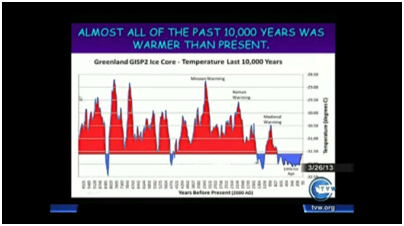 After almost two hours of unrelenting scientific testimony, Easterbrook totally destroyed virtually every known tenet of global warming/climate change fearmongering. While Easterbrook did believe there has been global warming since the Little Ice Age, he point-blank stated that human-induced CO2 cannot cause temperatures to rise. Easterbrook said that carbon dioxide is a trace gas. Its levels are so close to zero that even if one were to double them, the total sum would still essentially be zero. Green junk science is largely based on converting ecological minutiae into grave apocalyptic concerns.

Easterbrook also said the Antarctic Ice Sheet is growing. He stated there was no chance the ice sheet can melt anyway precisely because the average temperature of this continent is -60F. In other words, a 100 degree temperature swing is required for the ice sheet to start melting -- which is not going to happen. He also smartly contended that there is no ice sheet on the North Pole, only an ocean, and that polar bears are doing great in the icy sea waters in spite of the warming trend since the Little Ice Age.

During the lecture, Easterbrook debunked several more favorite global warming beliefs. He demonstrated sea levels have only been rising by about seven inches a century since the Little Ice Age, which has little to do with melting glacial ice. He also demonstrated severe storms were not becoming more frequent, but actually less frequent. Neither did he fail to say that ocean acidification is a myth, or that global warming advocates were tampering with the data -- all of which left one particular Democratic senator stunned.

Even though similar scientific arguments have been readily available for anyone to read for several years now, it was obviously the first time the Democratic senator had ever been confronted with such a scientific presentation of the evidence contrary to his own global warming outlook. His political point of view had insulated him from seeing reality -- which Don Easterbrook constantly tried to correct with empirical scientific data rather than with politicized computer models. The great problem, however, is that climate change advocates have become willfully snow blind.

Mark Musser is a missionary/pastor and a contributing writer for the Cornwall Alliance, which is a coalition of clergy, theologians, religious leaders, scientists, academics, and policy experts committed to bringing a balanced biblical view of stewardship to the critical issues of environment and development. Mark is also the author of two books, Nazi Oaks: The Green Sacrifice of the Judeo-Christian Worldview in the Holocaust which has been recently expanded, updated, and republished, and Wrath or Rest: Saints in the Hands of an Angry God, which is a commentary focusing on the warning passages in the book of Hebrews.