As most have already heard, the brothers Tsarnaev lived on the taxpayer dole before bombing the Boston Marathon.  The American response to this revelation is nicely summed up on the cover of The Boston Herald, in big, bold print: "WHAT NERVE."

Yes, how dare they?  How dare they take our money and then hate us for giving it to them?  How could they do such a thing? 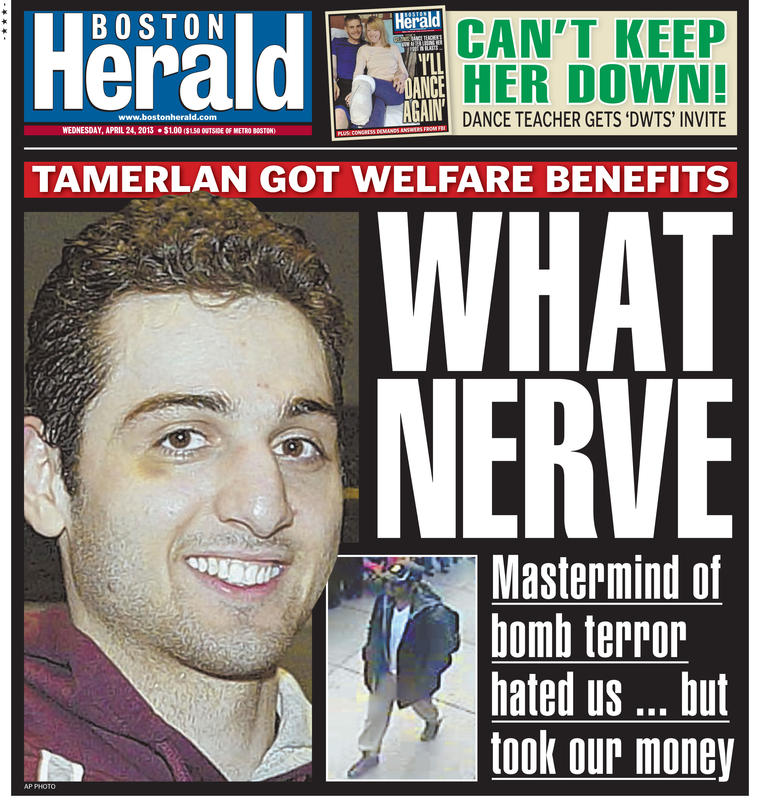 It's really rather simple why we have this reaction.  Americans have an improper understanding of what welfare actually is.  Many among us believe it to be charity and have the naiveté to believe that it will be accepted by poor, beleaguered beneficiaries as such.

But welfare bestows entitlement, not charity -- and its result is not gratitude, but resentment.  Democrats are all too willing to nurture those feelings of resentment, and the bulk of their constituents may be content with continued promises to grant them a pittance more in the next election cycle.  But that is not good enough for Islamic fundamentalists.  Allah promises Muslims the world.  He does not promise them a tiny sum of wealth which has been redistributed by infidel magistrates.  So it should be unsurprising that such resentment among Muslims manifests itself in jihad.

Moreover, such Muslims do not find any shame in collecting welfare, but find your payment of welfare to be a shame upon you.  It is entirely normal in terms of Islamic jurisprudence and history that wealth is redistributed from non-Muslims to Muslims, a forced payment for protection called jizyah.  The literal foundation for this practice can found the Quran, Surah 9:29, which relates:

Fight against those who believe not in Allah, nor in the Last Day, nor forbid that which has been forbidden by Allah and His Messenger, and those who acknowledge not the religion of truth (i.e. Islam) among the people of the Scripture (Jews and Christians) until they pay the jizyah with willing submission, and feel themselves subdued.

This practice of exacting jizyah from non-Muslims is profoundly tied to jihad, as is evident in this verse, and has been routinely implemented throughout history in the wake of Islamic conquest.  It is viewed as a spoil of holy war, meant to rob and humiliate non-Muslims, and has no noble purpose of any kind.

So according to Islamic jurisprudence and history, it is only natural that non-Muslims provide payment to help Muslims finance jihad.  That is just the just natural order of things.  What is not natural is the current hierarchy of authority between the two groups.  We are not yet "subdued," and that is why there is such a broad compulsion to jihad.

Notorious cleric Anjem Choudary, a longtime jihad bum living in England who now collects roughly $40,000 annually in benefits from the British government, explains exactly how he feels Muslims should view welfare.  He calls it a "Jihadi Allowance."  "We are on Jihad Seekers Allowance, we take the Jizya which is ours anyway," he says.

He finds Britain's producers worthy not of thanks, but of ridicule.  He mocks English 9-to-5ers, saying that some of the greatest Muslims rarely worked at all, save a day or two out of the week.  They were primarily "busy with jihad and things like that."

"We are going to take England -- the Muslims are coming," he says.  "These people are like a tsunami going across Europe.  And over here we're just relaxing, taking over Bradford brother.  The reality is changing."

He said these words to a meager audience of thirty, but that doesn't change the fact that he is right.  Millions of immigrants from the Muslim world infest enclaves around the urban cities of France, for example.  They live on welfare, just relaxing, taking over Marseille brother.

Idle hands are the devil's playthings, they say, and idle Muslim hands are no different.  These Muslims do not participate in French society and have nothing to do but reflect upon their own culture.  So is it any wonder that many in these Muslim ghettoes find the most useful thing to do with their time is beat homosexuals and Jews and engage in what the Daily Mail dubs a "French Intifada" -- i.e., jihad?

Our initial reaction to the fact that the Tsarnaev brothers lived on welfare should not be that we are appalled that they would "have the nerve" to do this to us after we've done so much for them.  Rather, this revelation should act as a defibrillator shocking us from unconsciousness to reality.  And the reality is that we are financing our own destruction with our careless welfare and immigration policies, which are designed not to protect American citizens' lives and equity as they should be designed, but to make Americans feel like we are doing some good for poor immigrants of all backgrounds.

In response its own dire circumstances, France has just revisited its welfare policy in regard to incoming and returning immigrants and slashed all payments by 83%.  I would say that now is the time that we do the same, but the truth is, we should have done something like this a long, long time ago.

Now, we would do much better to eliminate incoming immigrants' welfare payments altogether and make no bones about implementing rigid selectivity for the immigrants we choose to accept, lest self-financed Islamic terrorism become a more common occurrence.

William Sullivan blogs at http://politicalpalaverblog.blogspot.com and can be followed on Twitter.