There is an enormous irony contained in the Boston Marathon bombing. When the jihadi Tsarnaev brothers carjacked a Mercedes, it had a Coexist bumper sticker.

The Coexist bumper sticker is the religious symbol of the multicultural crowd -- you know -- all religions are the same. Well, the leading symbol of those who want to Coexist is the star and crescent Islam. And exactly how well has Islam coexisted with all the others? What kind of neighbor has Islam been over history?

Start with Mohammed. We know an enormous amount about Mohammed as a neighbor to Kafirs (non-Muslims), pagans, Jews, and Christians.

When Mohammed was in Mecca before he became a Muslim, he was a good neighbor who was prosperous and helped to settle disputes. But, that all changed when he became the prophet of Allah. Once he became a public preacher of Islam, he became an irritant to his neighbors. You see, not only did Mohammed know what was right, he demanded that everybody do everything his way, Allah's way. He was a neighbor who was always right and you were always wrong. Not only were you wrong, but your parents and grandparents were wrong. Mohammed no longer settled arguments; he created arguments. After 13 years of this, the Meccans told Mohammed to leave Mecca.

So he went to the town of Medina, which was half Jewish. And what kind of neighbor was Mohammed to the Jews? Put briefly, two years later, Medina was Judenrein (cleansed of Jews). When he arrived, there were three tribes of Jews. In rapid order, the first tribe was driven out of town, bereft of its goods. Then the second tribe of Jews was exiled. They were lucky. The last of the Jewish tribes suffered the most. The women were enslaved and sold wholesale for money to purchase horses and arms for jihad. For the rest of his life, Mohammed used slavery to help finance his jihad. The children were kidnapped and adopted into Muslim families to be raised as Muslims. Then the 800 male Jews were all beheaded.

But wait. Mohammed was not through coexisting with the Jews. Later he left Medina and went to Khaybar and attacked them. Mohammed crushed them, took their wealth and put them to work under the Sharia s dhimmis and give him half of what they earned.

That was how Mohammed coexisted with the Jews.

But Mohammed was not through with coexisting with the Arabians. He attacked the Meccan caravans. His jihadists killed, kidnapped, stole, assassinated and fought the pagan Arabs at every turn. Mohammed's coexistence policy with the Arabs was jihad. This went on until every Arab became a Muslim.

After Mohammed made every soul in Arabia convert to Islam, he turned his coexistence policy to the Christians north of Arabia in Syria. He attacked the Christians, with the losers becoming dhimmis just like the Jews.

Dhimmis are the way that the Sharia allows Kafirs to coexist within a Muslim society. The dhimmi is a third-class non-citizen who pays special taxes and has no real civil rights. A dhimmi cannot testify against a Muslim in court, for instance.

Look at how Islam coexisted with Africa. A clue as to the nature of that coexistence is that Arabic has one word, "abd", that means both black slave and African. Context must supply which meaning is used. Islam ran the slave trade on the West coast, East coast and Mediterranean coasts of Africa. Islam sold every slave that was brought to the Americas. Conservative estimates are that 120 million Africans were killed in the jihad that produced all of the slaves in Africa.

How did Islam coexist with the Buddhists in what is now Afghanistan? Jihad annihilated every single Buddhist and their libraries and monasteries.

There is a massive database of the coexistence between Islam and the rest of the world at thereligionofpeace.com. It catalogs more than 20,000 jihad attacks around the world since 9/11 2001. Here is a chart of the data of the top 4 nations as victims of jihad: 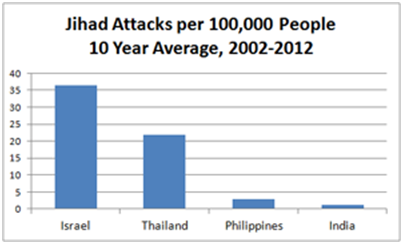 Put another way, this is how Islam coexists today with Jews, Buddhists, Christians and Hindus. It practices jihad against all non-Muslims -- Kafirs.

The idea of "coexist" has a social ring to it: we're all one big happy family. But how do we talk about all religions and not get into which one is right or best? Well, there is an easy way to do it. If you are not a member of a religion, the only thing you care about is how you are treated by those who belong to that religion. In short, you only care about the ethics and character of the adherent.

All of the world's religions have an ethical code that is rooted in the Golden Rule. Islam does not have a Golden Rule. Mohammed's life is the perfect example of how not to be a good neighbor. How do you coexist with a neighbor who has the ethical choice of jihad -- of murder and deceit?

What do religious leaders in American think about coexisting with Islam? They love it. "Coexist" is the mental mush that fills the heads of the useful idiots that go to the Family of Abraham religious dialogues. The ministers and rabbis who go to these dialogs know as much about Islam as can be found on the Coexist bumper sticker. Their ignorance is astounding. They are there to coexist and the imam is there to dominate. Dhimmi Christians and Jews want to tie, the Muslim wants to win.

But the mental mush of coexistence is not just in the heads of the dhimmi religious leaders, it also fills the heads of law enforcement and military. Under Bush and Obama, all of those who actually know something about Islam inside the military and law enforcement have been eliminated. FBI and military training files have been purged to satisfy the Muslim Brotherhood. So our protectors are forbidden to study the war doctrine of political Islam. They are prevented from naming the enemy and studying them.

There is only one way to coexist with Islam over time. Islam must submit to Kafir civilization and we must never submit to Islam, not even in the smallest detail. This means we must all know the smallest details of Islam and that begins with the knowledge of Mohammed and his wars against all Kafirs.